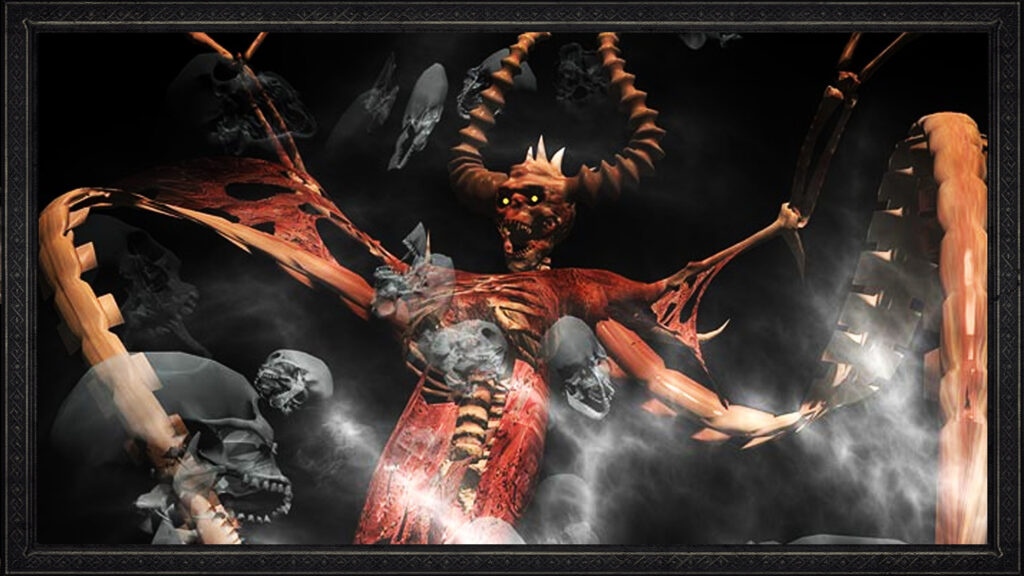 Diablo 2 monster immunities become more prevalent as you progress through the game. There are six primary damage types: physical, cold, fire, lightning, magic, and poison. In normal difficulty, and in early nightmare difficulty, various enemies are somewhat resistant to one or more of these. By the time you get to late nightmare difficulty, you will encounter a few monsters which are 100% (or higher) resistant (that means immune) to certain damage types. Throughout hell difficulty, almost every monster is immune to at least one type of damage. Very likely, you have carefully cultivated and synergized a particular type of damage during your character’s first sixty or seventy levels. Therefore, also very likely, you will be frustrated and rankled when you encounter those monsters that are completely unharmed by whatever damage you’re dishing out.

When playing with others, you can join with players that must handle whatever you cannot, but single players need more creativity, planning, finesse, and luck in order to deal with immune foes. It’s one of the challenges that makes the single player experience so engaging! Here are four options for overcoming this challenge:

Two character classes have skills that can reduce monster resistances below 100% (immune) levels:

Conviction, Lower Resist, Amplify Damage, and Decrepify work as advertised when used against merely resistant (but not immune) enemies. However, they are reduced to 20% effectiveness when used against immune monsters.

Druids, Barbarians, Assassins, and Amazons do not have a skill that reduces resistances, and while Sorceresses have Cold Mastery to lower cold resistances, alas, it never breaks cold immunity. Regardless, any character may hunt or shop for a magic dagger, wand, or staff with Lower Resist charges. A level 1 Lower Resist charge lasts twenty seconds, and lowers enemy resistances by 31%. In case of immunity, level 1 Lower Resist only reduces a resistance by 6%, but that’s still enough to break the immunity of a 100% to 105% resistant monster. As long as the weapon is not ethereal, such a wand or dagger can later be repaired and recharged to curse up to 67 times, or up to 22 times for such a staff.

There are a few items that can produce immunity-breaking curses or auras. Some are unique items, such as The Gavel of Pain, The Reaper’s Toll, or Azurewrath. Others are runewords, such as Infinity or Lawbringer, now available in Diablo II Resurrected to single players, and also in legacy game versions (1.14d and earlier) to single players with a forum-approved modification that enables ladder runewords. All of these unique items and runes are rather difficult to obtain, so you probably won’t have one of these unless you are a doggedly determined magic finder, rune finder, or item trader.

Another straightforward way to handle immune monsters is to develop and use a backup attack that deals a different type of damage. The problem is that your alternate damage type needs to hit hard enough to matter, especially against a monster that replenishes its own life during combat.

Crushing Blow and Open Wounds can cause extra damage, independent of the six primary damage types. Even against physically immune monsters, if your character can manage to cause even one hit point of non-physical damage with a weapon, that alone can be enough to also apply crushing blow or open wounds. (Note: Deadly Strike is another “extra damage” item attribute, but it only magnifies physical damage.)

Besides charms and other item-based weapon damage, it’s also possible to get alternate damage types from skills. Here is a brief rundown of skill-based damage types available to each class:

“If only the moron would just stay alive…”

A Desert Town Guard or Barbarian mercenary is a very capable physical damage melee fighter, so if your hero specializes in a non-physical damage type, one of these conscripts should be good at damaging whatever your character cannot. However, it takes practice to learn how to coax them into favorable fighting situations. Each has a tendency to select a target and just go for it, heedless of whatever nearby crowd waits to surround and clobber him. Careful retreats can help him (and you) to divide and conquer whatever enemies start to chase him. If you can’t use teleport to bring your hireling to heel, you can always try a quick escape through a town portal if you need to pull your mercenary out of harms way. (Put an extra town portal scroll in one of your character’s belt slots if you think you might need to use it for a split-second getaway.)

Another popular practice is to give “life stolen per hit” equipment to mercenaries, so that they leech back some of their lost life while they fight, and survive longer that way. An easy way to make a leeching weapon is to ask Larzuk to put a socket in it, and then insert an Amn rune into the socket. Since ethereal weapons cause higher damage, a ethereal weapon socketed with Amn will leech back even more life; furthermore, if only used by mercenaries, that ethereal weapon never loses any of its durability.

A Rogue hireling also delivers physical damage. As she grows to higher levels, she also uses her fire or cold arrow skills more frequently, and when she does so, she converts more of her damage to fire/cold. She will need a hard-hitting bow if you expect her elemental damage to help you handle PI monsters.

Iron Wolves are reasonably good at delivering elemental damage, but their attacks don’t get the same synergy punch-ups enjoyed by their sorceress counterparts. This makes them rather less effective in hell difficulty than the other mercenaries. However, that doesn’t make them useless. In particular, if your character can capably take on the cold immunes, a cold Iron Wolf is reasonably good at crowd-controlling all of the other monsters for you.

Avoid or “lure and park” whatever you and your mercenary can’t kill. Just let those immune monsters stay alive. It’s not easy, but there are lots of “single element” sorceresses that use Teleport to buzz right by immune monsters, in order to pass them and then engage whatever else is not immune. Some paladins use Charge to speed around or away from immunes. Pity that you don’t get experience points that way, though.