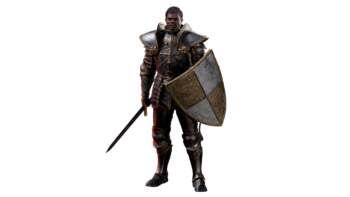 Required Level: 1
Prerequisites: None
Synergies: Points in these skills increase the damage done with Sacrifice.

Details: Sacrifice boosts the Paladin’s damage and attack rating substantially, at a cost in blood. Each hit landed with this skill inflicts 8% of its damage on the Paladin.

Required Level: 1
Prerequisites: None
Requires: A shield equipped.
Synergies: None.
Details: Smite is a shield bash that damages, stuns, and knocks back the target.

Required Level: 6
Prerequisites: None
Synergies: Each point in the following skills boosts the damage or healing of Holy Bolt.

Details: A glowing, magical projectile is fired out at a medium rate of speed. This projectile will damage enemy undead monsters, and heal friends.

Details: A rushing attack that moves the Paladin very quickly to the target. Includes a knock back effect allowing it to be used over and over again on the same enemy, knocking them back until they die or run into an obstacle.

where the terms are as above. By substituting BaseRunSpeed and multiplying it by 150%, we get:

There is no lower limit to ChargeSpeed. It can be even negative.

Details: A powerful single-hit attack that adds fire, lightning, and cold damage. The damage is not a set amount, but is based on your weapon damage, so the more damaging your weapon, the bigger the elemental damage bonus will be.

Details: Blessed Hammer sends forth a spinning, magical hammer that spirals outward from the Paladin, making two or three orbits before vanishing. The hammers can deal enormous damage when boosted by auras and synergies.

Required Level: 24
Prerequisites: Sacrifice, Zeal, Vengeance
Synergies: None.
Details: This skill acts as a mind control attack, “converting” the monster to fight against other demons. For the duration of the effect, the monster will battle against its own kind, and be attacked by them. It can not be damaged by players during this time. This skill lets a paladin temporarily have a similar army like the Revive summoning Necromancer build.

Details: Fist of Heavens calls down a bolt of lightning on the target, and sends out a spray of Holy Bolts. The lightning always hits, making this skill useful for evasive creatures or in PVP.