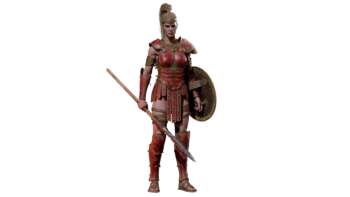 Amazon Passive and Magic Skills are invaluable support abilities for Javazons, Spearazons, Bowazons, and every other build of the character. Boost damage, defense, accuracy, gain a magical tank, and more

Required Level: 1
Prerequisites: None
Synergies: None.
Details: A curse-like debuff skill that lowers the defense of all enemies within range.

Lore:
The lush canopy of trees covering the Amazon homeland allows little sunlight to reach the ground. To better adapt to their environment, the Amazons have developed a technique whereby they can attune themselves to the life forces in the surrounding area and transfer these energies into a source of luminescence. This enables the Amazon and her companions to see her enemies in shadow and darkness.

Required Level: 1
Prerequisites: None
Synergies: None.
Details: This extremely powerful skill gives a chance to deal a critical strike, doubling the physical damage of an attack with any sort of weapon. Loading up the points in this skill is almost mandatory for every Amazon build.

Lore:
Among the arsenal of techniques employed by the Amazon warrior is her ability to study opponents carefully and detect any weaknesses. She can then use these deficiencies in her adversary to strike at precisely those areas that will cause the greatest injuries.

Required Level: 6
Prerequisites: None
Synergies: None.
Details: Allows the Amazon to dodge melee attacks while standing still or attacking. This is a very powerful skill, especially for melee-fighting Amazons, who generally want at least 50% in it.

Lore:
To anyone familiar with their natural agility, it should came as no surprise that the training regimen of an Amazon warrior includes exercises specifically designed to avoid potentially devastating blows in combat.

Required Level: 12
Prerequisites: Inner Sight
Synergies: None.
Details: A curse-like debuff skill that slows the missles of all monsters within the skill’s range. This skill works like a curse; affecting the archers, mages, etc themselves. It does not slow down missiles in the air when it’s cast; it just makes the cursed monsters shoot very slowly for the duration.

Lore:
Through strict martial discipline and focus, an Amazon warrior can attune herself to her environment and the dangers around her, allowing her to react to these hazards with superhuman agility. One aspect of this ability is her knack for avoiding missile fire. Just as the Amazon must master the bow and javelin, she must also learn to defend herself from these same weapons. When an Amazon uses this ability, incoming projectiles appear to move slower than normal, enabling her to avoid them.

Required Level: 12
Prerequisites: Dodge
Synergies: None.
Details: This skill allows the Amazon to avoid ranged attacks while standing still or attacking. It’s less useful than Dodge since ranged attacks aren’t as damaging, you’re usually running when they come in (Avoid doesn’t help when you’re moving), and skillful use of Valkyrie, Decoy, and Slow Missiles should cut the danger of ranged attacks anyway.

Lore:
This ability hones the natural defensive ability of an Amazon. If she stands still, she can predict incoming missile attacks and elude them before they reach her. Most Amazon people can do this if all of their thoughts to the task, but only a warrior trained in this skill can do this even whilst caught unaware.

Required Level: 18
Prerequisites: Critical Strike
Synergies: None.
Details: This skill passively boosts the Amazon’s Attack Rating. The use of this skill varies by Amazon build. Some skills have huge AR bonuses, or function as “always hits” attacks, so don’t need much Penetrate. Some Bowazons may not use Penetrate very much simply because their dexterity is so high they don’t need it.

Lore:
The warriors of the Amazon Islands are legendary for their ability to strike their mark. Warriors with this skill are more likely to hit targets.

Required Level: 24
Prerequisites: Inner Sight, Slow Missiles
Synergies: None.
Details: This skill creates an exact duplicate of the Amazon wherever the cursor points. It will draw the attention of any monster nearer the decoy than the Amazon (or Valkyrie).

Lore:
Amazons derive another benefit while learning to fight in the rainforests of their homeland. They learn, through misdirection and deception, to fool attacking forces into thinking there is another Amazon nearby. This subterfuge causes enemies to waste time and energy hunting down false prey while the Amazon moves in for the kill.

Lore:
A warrior skilled in Dodge and Avoid may eventually learn this additional ability. Once an Amazon has sharpened her defensive concentration to this level, she will eventually be able to dodge blows and other attacks while moving. This skill can also help keep the Amazon from harm as she moves out of the way of an exploding siege engine or avoids the wrath of an enraged Sorceress!

Details: Valkyries are powerful magical tanks. They spawn with high defense and hit points, and can stand up to a tremendous amount of damage. Their attacks aren’t generally very powerful, but in v1.11 they can kill weaker monsters, plus they spawn with random equipment that changes the colour of their armor. Some Valkyries can spawn with very useful mods, such as “% chance to cast Frost Nova” on armor, or or “% chance to cast Amplify Damage” on their spears, for instance. See Discussion page for details.

Lore:
When a warrior has proven her devotion to Athulua through her brave deeds and exceptional skill in battle, the Goddess shows her favour by granting a spiritual emissary to aid the Amazon. These emissaries of Athulua are called Valkyrie, and they are the spirits of the greatest heroes from the Amazon people. The power to summon a Valkyrie is the greatest honour that an Amazon warrior can receive. It is believed this gift is a sign that your place beside the Goddess is assured when you pass from this world-perhaps even as a Valkyrie.

Required Level: 30
Prerequisites: Critical Strike, Penetrate
Synergies: None
Details: This skill gives the Amazon’s projectiles, javelins, bolts, or arrows, a chance to pass through a target and continue on, possibly hitting a second (or third, or fourth) enemy. Each target takes the full damage of the attack, including all possible skill bonuses, elemental hits, etc.

Pierce’s true power is revealed with a look at the odds of hitting multiple targets. More points don’t make that big a difference in the odds of hitting two enemies, but the odds are compounded when figuring if a given shot will hit three or four or five enemies. This makes a huge difference when using a skill that triggers on each hit, such as Lightning Fury or Immolation Arrow.

Lore:
After long hours of training, an Amazon warrior’s bow arm can develop tremendous strength. With this strength, and some additional training, the Amazon is able to maximize the power of her bow, enabling her to penetrate multiple targets with a single arrow.