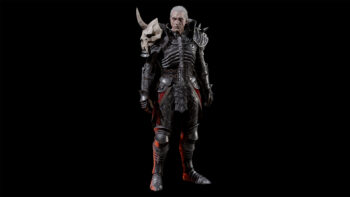 From the steamy recesses of the southern swamps comes a figure cloaked in mystery. The Necromancer, as his name implies, is an unseemly form of sorcerer whose spells deal with the raising of the dead and the summoning and control of various creatures for his purposes. Though his goals are often aligned with those of the forces of Light, some do not think that these ends can justify his foul means. Long hours of study in dank mausolea have made his skin pale and corpselike, his figure, skeletal. Most people shun him for his peculiar looks and ways, but none doubt the power of the Necromancer, for it is the stuff of nightmares.

As might be expected, the devotees of magic are a segregated lot. They are as leery of students of rival disciplines as a layperson is of all arcane practitioners. None, however, are so widely maligned and misunderstood as the Priests of Rathma.

As with most users of magic, the priests of the cult of Rathma hail from the far Eastern Jungles. They reside in a vast underground city located deep within those jungles. Their specific geographical locale is particularly secluded, however, preventing their assimilation into a formal mage clan. But it is this same isolation that has allowed them to pursue their distinct kind of arcane science.

For it is through the teachings of Rathma, as well as through years of research and physical experimentation, that these men have come to understand and hold sacred the delicate balance of life and death and are able to twist the line that borders the two. For although the minions of Hell have long possessed this power, among mortals the knowledge to reanimate and control the dead belongs to these priests alone. It is this practice that has led outsiders to refer to them as Necromancers. They truly comprehend the balance of all things,and understand and accept their place in what they refer to as the Great Cycle of Being.

Their culture has subsisted in the shadow of the great mage clans from the earliest days, and in most ways their practice reaches back to a time before magic was formalized into strict disciplines. Although their art is considered “dark”, and the people of the outside world shun the priests who practice these arts, these mysterious cultists never suffered the epidemic of corruption that plagued the ancient mage clans.

Pragmatists in the truest sense, they are above temptation. They see death merely as a natural part of life and do not seek to deny its arrival. Their singular knowledge of the unknown allows them to face death without fear. These ideals, coupled with an understanding of the natural balance between Order and Chaos, explain why they have not fallen prey to the influences of evil.

Their desire to uphold this balance has brought the Necromancers forth from the isolation of their remote, dank homeland to destroy Diablo and his brethren. The mere presence of these Prime Evils on the mortal realm upsets the natural symmetry of not only the mortal realm, but also the Great Cycle of Being itself. The followers of Rathma seek to right the balance by ridding the mortal realms of nonmortal intervention altogether. They resent any force that would treat humans as pawns in a cosmic game, though they apparently are willing to ally with the forces of Order, but only until such time as the balance is restored.

Necromancers have the ability to reanimate corpses of most entities and to control the recently deceased. The dead release spiritual energies that haunt the mortal realms. The Necromancer can focus these energies, giving them manifestation in the corporeal world. Practitioners of necromancy can curse the very fate of a victim by manipulating the Prime energies flowing through all living things.