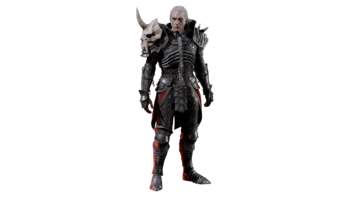 This skill tree houses the Necromancer‘s direct damage spells, the Necromancer Poison and Bone Skills. These are not as powerful as those of the Sorceress, and must be paired with Curses and used strategically to kill effectively.

Poison damage in Diablo II is listed as damage over time, and the actual damage done per second can be virtually impossible to calculate with the damage stacking from skills, weapons, charms, etc. Poison damage does not stack with multiple attacks, but resets each time to the most recent poison-based attack. Poison damage can kill, but it’s not especially useful for that in large games, or past normal difficulty. It is very useful to keep monsters from regenerating hit points, since they will not heal while poisoned.

Required Level: 1
Prerequisites: None
Synergies: Teeth becomes much more effective if a Necromancer specializes heavily in the related skills:

Details: Each casting of this skill fires out multiple wriggling projectiles in a fan pattern. The targeting works just like the Amazon’s Multiple Shot; spreading wider when targeted nearer the Necromancer, spreading less when aimed further away.

Required Level: 1
Prerequisites: None
Synergies: Bone Armor is boosted by points in the following skills:

Details: An orbiting shield that absorbs a set amount of physical damage before vanishing.

Required Level: 6
Prerequisites: None
Synergies: This skill is boosted by points in the following skills:

Details: Adds huge poison damage to melee attacks. Since poison damage attacks don’t stack, and this one lasts a very long time, it’s best used with minions to hide behind, or paired with curses such as Dim Vision or Terror.

Required Level: 6
Prerequisites: Teeth
Synergies: None.
Details: One of the messiest and most fun skills in the game, Corpse Explosion detonates fallen monster corpses in messy sprays of bone and blood, striking all nearby enemies for substantial fire and physical damage.

Details: This skill calls a durable wall of bone up out of the ground. The wall serves as a barrier, and will draw monsters to attack it, killing themselves if they’re cursed by Iron Maiden.

Details: Like Corpse Explosion, but with poison damage. It’s not much of an upgrade, and in fact has considerably lower killing power in large games, thanks to the damage not scaling up with hit points, as Corpse Explosion does.

Details: Bone Spear fires a straight shot of magical damage bone that can pass through any number of targets. It does less damage to each target than Bone Spirit (until very high levels), but can hit multiple enemies, and is very effective against large mobs, or in narrow hallways, such as inside the Maggot Lair. Their damage is magical so only by raise skill levels can you increase it.

Details: Bone Prison functions like Bone Wall, but creates a small circle of bone posts, instead of a long, straight wall. This skill can be targeted at a monster, imprisoning it within the prison. Monsters will target the walls and beat them into splinters, but only if they can not get to the Necromancer or his minions without destroying the bone obstacle first.

Details: Poison Nova sends out an expanding circle of toxic bolts, poisoning everything within range, and virtually everything on the screen. The damage of this skill is inflicted over just two seconds, so it can be fairly powerful, but must be used repeatedly, and is not useful just to poison everything in sight to keep them from healing over the course of a long battle.

Required Level: 30
Prerequisites: Teeth, Corpse Explosion, Bone Spear
Synergies: The damage of each Bone Spirit is boosted by points in the following skills:

Details: Bone Spirits are slow-moving, homing missiles that will track targets for quite a distance off the screen. Their damage is magical so only by raise skill levels can you increase it.