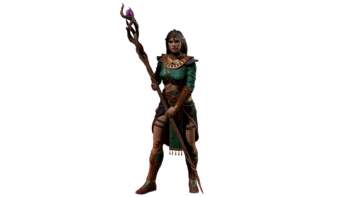 The Sorceress fire spells provide the highest total damage of any of her skill trees, but tend to be slower to use and to require more exact positioning and aim to use to their greatest effect.

Required Level: 1
Prerequisites: None
Synergies: Points in the following skills boost the damage of Fire Bolt.

Details: Shoots a small ball of fire. Fire Bolts hit only one target and have no splash damage.

Required Level: 1
Prerequisites: None
Synergies: None.
Details: Warmth increases the Sorceress’ mana regeneration rate. A mandatory skill for all Sorceresses, the only question with Warmth is how much is enough. This depends largely on the build; Sorcs who cast a lot of high mana skills, such as Nova, will want more points in this skill, while a Sorceress who specializes in Blizzard or Hydra will not need as much mana.

Details: Inferno turns a Sorceress into a human flamethrower, capable of emitting a massive spout of flame for as long as the spell is kept active.

Required Level: 12
Prerequisites: Inferno
Synergies: None. Details: Blaze leaves a trail of fire behind the Sorceress as she walks or runs along, for as long as she keeps the spell active.

Details: A substantial upgrade from Firebolt, Fireballs are larger and more damaging, and they hit with splash damage, burning the target and any nearby monsters too.

Casting Delay:: 1.4 Seconds
Required Level: 18
Prerequisites: Inferno, Blaze
Synergies: None.
Details: A wall of flame springs up in both directions from the spot the Sorceress targets for ignition.

Details: Temporarily grants bonus fire damage and boosts the Attack Rating of any friendly player or minion. Enchant must be cast directly on the recipient.

Details: A flaming ball of rock is called down from above, dealing explosive damage to the target and leaving a patch of fiery burning earth behind.

Required Level: 30
Prerequisites: None
Synergies: None
Details: This skill passively raises the damage of all the Sorceress’ fire skills, and is an essential skill for any fire sorceress.

Details: Hydras are three-headed dragons composed of pure flame. The heads each fire a constant stream of Fire Bolts, dealing damage to the target, but not splashing to the sides. The Hydra causes no damage itself; there’s no area of effect damage simply from the flaming dragon, it has to shoot targets to hurt them.