In last week’s article on the Diablo 4 June update,  I wanted to wait until this week to take a dive into the Journal and my overall thoughts on Diablo 4 systems.  I admit I’ve been playing Diablo Immortal.  I find it fun for exactly what it is:  A quick hit ARPG in Sanctuary.  Yet after I watched and listened to the video and read the update, I see a lot of similarities in design.  The Diablo 4 designs appear to be a bit more refined for an epic ARPG with a long storyline, but the similarities could also spill over in negative fashion.

You Decide & Explore Your way

An open-world where you forge your own unique path.  I like this, but I also was hoping for some static areas that were just harder.  I lose immersion when you start a game and go face Demons and they don’t even shred a lick of blood from you during your first foray into a game.  Balrog type enemies should be scary and hard, not weak when you first fight them.  I appreciate a non-linear game and hope they figure out a solid system of moving through areas that are level appropriate while still having hard stuff.  In Diablo Immortal you have gear scores, and we may in Diablo 4.  When you’re weak in an area you take more damage and deal less.  I could see this translate over easily.

The development team states there are about 150 detailed dungeons.  I’m not sure what that means, but I take it to mean that 150 have been designed with a specific goal in mind.  Is it akin to Act 2 bounties in D3 such as: Lost Treasure of Khan Dakab to where it takes about 2 minutes for you to pull a couple levers and kill a few monsters or are they more like small dungeons in an MMO that take a bit more time?  At the end of the day, the determining factor is fun.  Baal runs are fun and clearing the throne room has led to many deaths, yet those are cleared in a few minutes and rewards in experience and drops has stood the test for 20 years.  In Immortal the Baal run has been enhanced in the Temple of Namari with around 6 different spawns (a total of 3 are spawned randomly in successive waves).  I honestly would be happy if they were 10-15 minutes a dungeon run as I believe that is a around the maximum time for an ARPG dungeon (or any game for that matter, as I loved The Secret World’s dungeons being quick).

The individual members in a party and their gear strength mean nothing.  I don’t like this, and I mean I really don’t like this.  It downplays some of the strategy and makes everything just a bit easier to cater to the masses who couldn’t be bothered to do any type of character build or gear analysis.  I have yet to do an Elder Rift (any level of grouping done) which was a challenge in Diablo Immortal.  They have all been super easy.  Meanwhile, in the Temple of Namari, or any other Hell 2 difficulty dungeon, you can clearly tell the difference when people just hit the minimum paragon and people who are now geared to tackle the challenges in the higher difficulties.  I’m okay for general questing being here, but there should be requirements on certain areas if relevant loot is dropping.  Use these instances to drop general crafting items to make the difficulty and challenge equal an appropriate reward.

The new paragon board looks great and they are really going for that Path of Exile style gameplay, but took it a step further with those boards.  The D2-styled trees are a great way to build diversity among builds.  The character creation is the best by far of any Diablo game thus far as well.

Is there an upper limit to a character’s potential in Diablo 4 is my utmost question?  You know in D2 that you have a set number of slots with items, levels to allocate stats, and that gear and charms have had numbers.  We also know that you can go to Hell equip whatever slightly above-average javelin you got and rip through the majority of the game with Lightning Fury too.  On the flipside, we also know that the denizens of Hell have level caps, and growing above the average monster leads to us growing stronger ever so slightly.  In D3 this was sort of open-ended for the majority of players that I know that played:  Play until you get bored (Paragon 800 for me personally) as many of us aren’t going to cap 3 gems we used to 150 and then cap enough others to fulfill the item boost per slot by enhancing them.  I like hard caps on power.  One of the things that sets an ARPG different from an MMO is the desire to have multiple characters and builds.

What is the actual endgame and how are we growing more and more powerful?  We know dungeons are enhanced by way of Nightmare dungeons but until we see the exact details, I’m going to guess it is almost timer-like activities to enhance rewards.  We also get the Tree of Whispers, which looks sounds to be a hub area that dishes out bounties and weekly goals.

The Paragon board says it unlocks at max level in this article, but previously obtained at level 50 and a hard cap of around 200 in the Paragon update I did back in February.  Has this changed and if so, why and how?  The Diablo team has data on how long players play on D2, D3, and soon in Diablo Immortal to find the best middle ground they can on character play time and how it is used.

How do you cap power?  You introduce modifiers specific to new areas.  You could set newly introduced zones to have achievement/paragon/etc points that cap at a specific number and your damage dealt/taken in that zone is a -20% to +20% based on your knowledge of the new zone by slaying demons.  So instead of introducing additional levels, you have a sort of zone achievement, an example would be you gain 1% health regen in this zone and your -20% now is -18%. (20 points total on a 30 point tree or something with 2% gained per point, only obtainable by slaying monsters in the zone).  This way your not introducing an overall increased power with new content, but area-specific modifiers.

Lastly, I don’t want the game to have hidden gates.  They have this in Immortal and I would be terrified if it comes to Diablo 4.  Would remind me of how Diablo 3’s initial launch was where you go for a specific area in an Act to improve your power as your gated because you can’t kill in an area and the drops are too hard otherwise, so you must farm in specific areas.  Farm your way, and I have hope it is like this, since they added new Mlvl85 areas to D2R.

The campaign is going to be roughly 35 hours long.  That is a great length.  Gives me time to complete a character and then decide whether I want to continue with them or make a different toon.  I really hope that they take the Diablo 2 approach to the game.  There is a reason why D2R sold 5 million copies in around 6 months.  There is also a reason why it is more active than Diablo 3.  Stick to that formula and improve upon it with the paragon boards and additional things to do (Dungeons, Cube Maps if that becomes a thing, etc).  Don’t stray too far otherwise I think we will still see solid numbers in D2R after the honeymoon period wares off and people see D4 as just another lackluster installment just like people view Battlefield 2042. 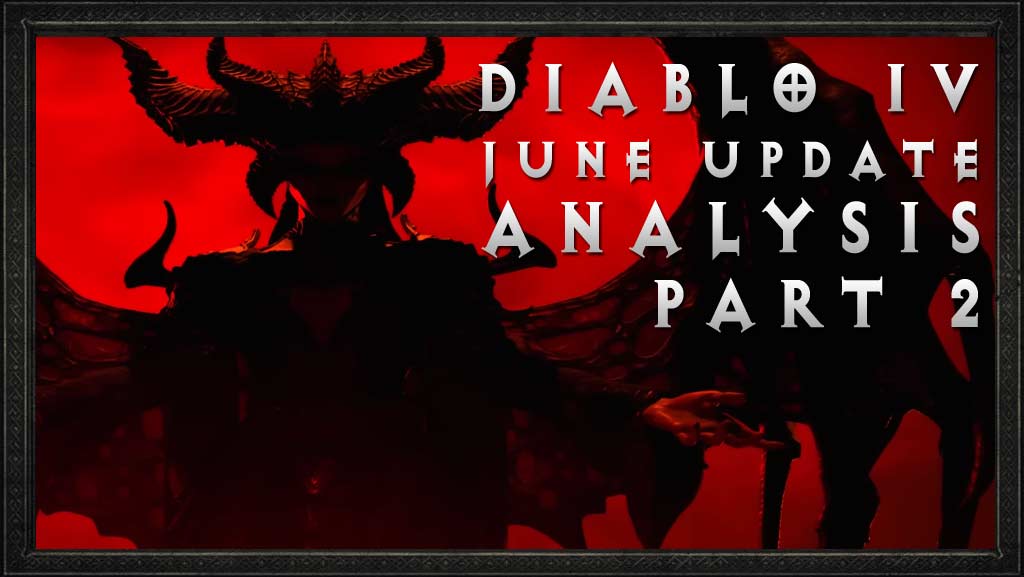 @d3us2029 Funny you should mention that. There's a load of stuff going on in the background right now that will be going live soonish. There has been a disconnect between many of the user systems which means big changes in the backend which we are working on right now. It's a big job but I've been flatout on it for a couple of weeks. I was hoping to have this all sorted this week but a few tech hiccups are hampering progress but we're getting there :)

With much of the community being forum-focused, those accounts have to be tied to non-forum systems, and making that bridge is key. Now that D2R is also out, traffic has reduced across the board but we are prepping for D4 now.

I only have so much time to dedicate to the site each week and that's diminishing as my main job (helping getting a new indie game developed and funded) is taking up more time. The idea is to give the community here easier access to things and allow the community to become more pro-active with posting and content. As the site runs completely non-profit, all of us who work on it, have to find ways to pay the bills for the site and time spent on it each month and we're keeping all that in mind with changes we make.

I hope all that makes sense :)

It makes complete sense and thanks for explaining what is actually happening behind the scenes. Hope you guys get it all sorted out soon!