I always thought Lord of Destruction was on the right track with the release of the Assassin and Druid.  I remember it fondly loading up with my best friend in my sisters’ room using her computer loading an assassin and I deciding to go all werebear on the druid.  We smashed our way up through Act 2 until he had to jet.

I remember the only class he played for a while was the assassin and it is still his highest class to date (91).  The skill tabs of the Martial Arts and Shapeshifting, Werebear in that tree in particular, have always been lackluster overall. Though with the release of 2.4 they look to get spiced up soon. Both have been easily outdone by their counterpart trees since the release of LOD:  Traps and Elemental.

When I say good choices, I specifically am referring to clear speed and appeal to get to level 99 with those specific builds compared to the counterparts which do it easier overall and this article is not covering any PVP.

We are going to start off with our trusty lady, as I am a gentleman, and my wife likes it when I am chivalrous therefore it seems fitting.  I have mentioned previously in my article earlier this week I took a magical item only martial artist to Act 3 Hell on HC.  Had I not been in a hurry to finish, I would have gained a few levels and most likely completed guardian status, though Ancients may have been an issue.

Prior to this 2.4 patch, most Assassins focused on Traps, specifically: Lightning Sentry, Death Sentry, and Fireblast as the main build used by Assassins.  This works great while your +skills boost your Shadow skills to usable levels for great crowd control.  Furysins (a personal favorite as well) get a bit of love but are a niche build generally.  Martial Arts on the other hand were great at Uber killing with Dragon Talon while the other Martial Artist were okay for playthroughs.

The changes below should add some spice to the Assassin builds going forward for a more mainstream play:

How to gear up these toons?  Well, there is this lady you save (or don’t, but I’d advise you too!) that allows you to shop for some great Claws rather fast.  That is Anya in act 5.  Who provides some solid magical claws to boost your +skills until you get better ones.

Dual Bartuc’s is an option as is the new Plague Rune word as it is possibly the best in slot with +3 to Phoenix Strike and Fade for a Phoenix Strike based build.  Pattern is a solid low-level rune word if made in an exceptional base with level 25 or 30 requirements with +skills.

For Blade Fury, Death is a great Rune word made in an Ethereal Axe.   Lawbringer is a low-cost item that is solid early on in a good ethereal exceptional sword base.  Fortitude is almost a must for this build to really shine.  The biggest issue was the CTH and I think with the improvements it should be a lot better now.  Having a mercenary that increases that can help and all 4 Mercenaries are an option with skills to increase that chance to hit percentage.

The Druid:  Elemental, Summoning, and Shapeshifting

The Druid’s Werebear skill is my favorite way to play the Druid, followed by the Fire Elemental Skills.  All these have been buffed with the recent patch notes, and it looks like the Werebear might finally really shine.  They are still adjusting the attack speed of shifting, so that will be left alone for now but let’s go over the major changes to this jack-of-all-trades.

Lots of changes along with a new Rune word Flickering Flame increasing the fire potential.  Still searching for +3MoltenBoulder/+3Direwolf/+3Volcano myself.  Fire druids seems to get a solid boost.  Summoning I haven’t had a chance to test, but it appears they still need a bit of oomph to push it to pure summoner, but will be overall more effective than it was previously and can easily take the heat off our Shapeshifters to maximize their safety and damage potential.

How to gear up?  If your going the Fire route and amount of +skills works (Spirit/Spirit/Lore in +skills helm) all are quick and easily attainable.  Added bonus of using to pre-buff summons as well.

For shapeshifters any fast items with high damage usually work, though with new uninterruptable attacks on the werebear you might want to lean into a powerful one-handed with a big old shield.  Hwanin’s Justice is a great item at level 28 followed up with an Oath runeword.  Immortal King’s Maul is a great weapon as it can add attack speed or eth runes to land the right amount of speed and chance to hit while providing a nice 40%CB.  An ethereal Tomb Reaver with a Zod is still a great item.

Next week I’ll take a look at the Barbarian and Amazon changes with the 2.4 update.  Get your Throwing Axes, Javelins, and Spears ready!  Unless of course you’re more of a Conan thief version lover, then please get those daggers ready. 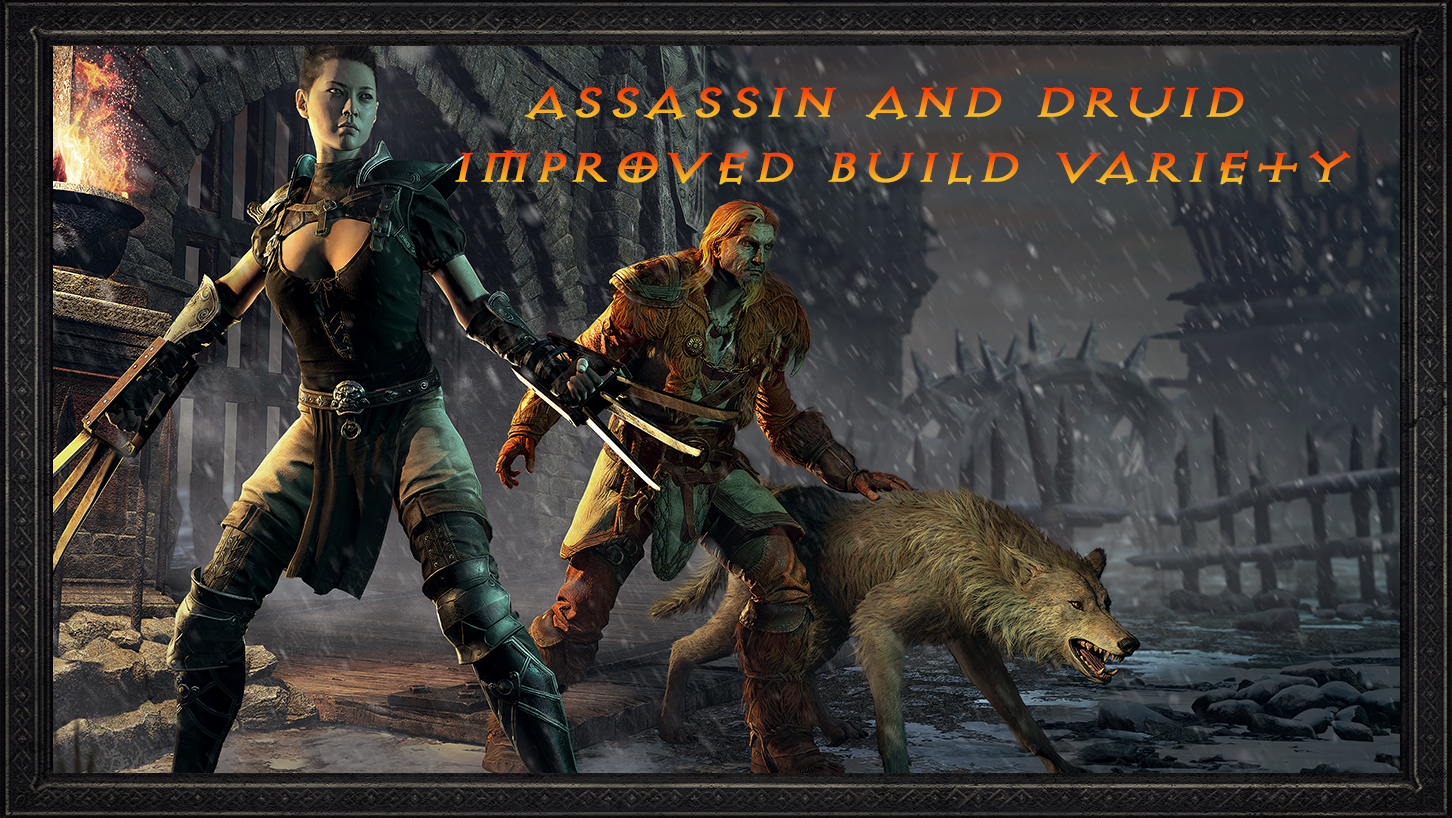 Vang takes a closer look at the Assassin and Druid and points out changes players should take note of.