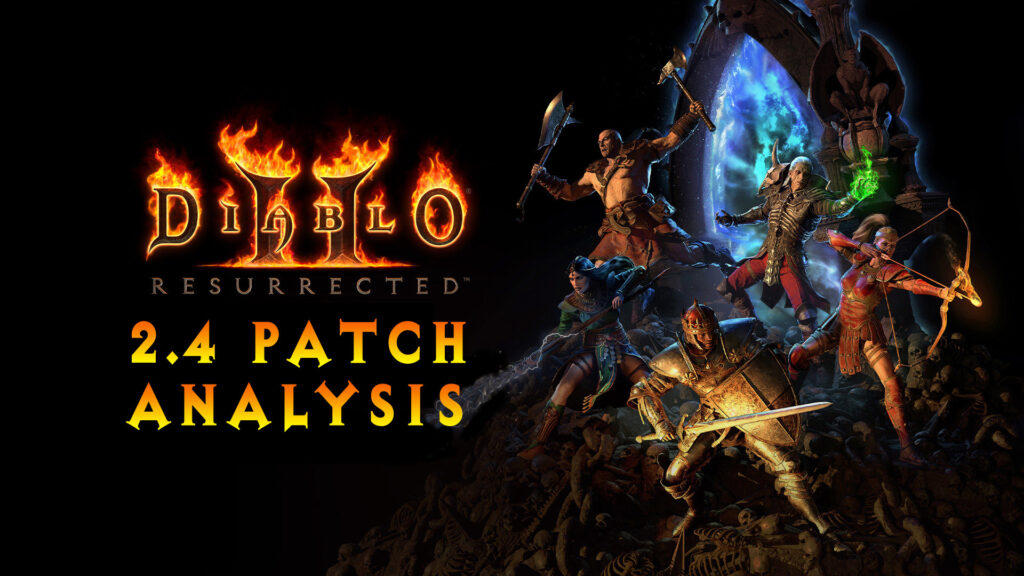 Ah Fresh Meat!  It is good to be back and into writing a weekly article or two after a wonderful vacation in Florida with the family.  With the 2.4 patch update, I wanted to provide some quick thoughts and analysis.  This patch looks like it’ll bring quite a few nice features and changes to D2R!  Going forward I’ll start writing an opined-on updates on same day or next from henceforth, unless the Multiverse gets me.

Heroes of Sanctuary. Thank you for your outpouring of feedback on some of the first changes made to Diablo 2 in over a decade. We return to you with adjustments to those changes based on your thoughts, opinions, and survey answers. With this round of changes, we spent most of our efforts on the areas where the feedback was overwhelmingly unified as well as some areas where we may not have pushed hard enough for a meaningful change. We would love to hear more of your thoughts on these iterations.

I filled out a couple of the surveys and it was good to see overall that the development team took what people said, tested them and implemented some solid changes.  Looks like they want to increase build variety without going too far.  I don’t want it to be: “What animation do I want to look at today?” like Diablo III.

I am first to admit I have never faced Uber Diablo.  I fought Uber Tristram years ago, but generally this feels like a needed change to increase availability.

I’m going to be the first one to say I love Amazons with a Spear.  The Rune word changes (Obedience in particular) add a lot of potential to a fendazon.  The Impale though?  Still probably off without some sort of multi hit ability.  Still will be solid as a 1-point wonder against bosses with a few +skills to increase slow% to slow Baal and Diablo to a crawl while your Charged Strike finishes them off with ease.

Bow skills:  Immolation arrow was nice to see it got a smaller cool down period, will be like spamming Firestorm now.  The MS/Strafe buffs have potential to being lowered as they powerful before.  They were already used for fast clears previously and it looks like maybe they wanted some damage potential without being totally reliant on gear.  Wish Magic Arrow got a boost from this though like Guided Arrow got.

Overall, I am loving the MA changes and took a HC character using only blues to Act 3 Hell until my vacation was upon me and I wanted to rush through resulting in a dead Assassin, but heck it was a blast!

Blade skills got some major love and increasing AR for Blade Fury is never a bad thing.

Developer Comments: We saw an opportunity to make leap attack more viable by changing to fantasy to make the leap itself an attack. By doing this we feel like the combat viability of the skill will increase while still preserving it as a movement skill. We feel that this change paired with the animation changes we made to it brings the leap attack more in line with the fantasy and feel we want it to have.

I didn’t get a chance to checkout Leap attack changes, but they look solid and should be sweet to use.  Masteries got improved with more AR to help out and Blade to include Dagger is a great choice (Now when is Claw Mastery going to be changed to include Daggers?).  The throwing improvements should help greatly as I love throwing Barbarians and can’t wait to play one again in an upcoming tournament I either host or participate in.

Developer Comments: The restriction of the Druid being allowed only one type of summonable at a time has restricted the viability of this build and has hampered the fantasy of a Druid Summoner from living up to its full potential. We feel that a druid being able to summon all of his allies at once will make for a more interesting and fun playstyle.

Developer Comments: We’ve debated on the best way to bring shapeshifting Druids forward. After much discussion, we are going to commit to the modern (Balance PTR 1) way of calculating attack speed for the wereforms. We have rebalanced the werewolf to allow that form to reach even faster speeds than it could previously. As for werebear – we want to deliver on the fantasy of a powerful, unstoppable, killing machine. We’ve introduced uninterruptible attacks and skills, as well as increased damage and defense. While this will change the way players have played the Werebear in the past, we feel like it is more in line with the intended fantasy. For players who loved their fast werebear builds, we’ve added attack speed bonuses to Maul, but we also hope the new Werewolf changes will offer them the same style of play, as it is now the faster form.

There is a lot here.  Recently using a Fire Druid who is at 65 in Act 5 NM and the Armageddon changes are wonderful!  The summon changes seem to generally be well received and requested for the longest time.  Hopefully the Vines are reworked too so they might actually be worth putting a point into.

Shapeshifting looks like is still being looks to be in a good place and Werebear being uninterruptable is really a nice added touch.   As the Druid overall seems to be sort of the Jack-of-all-trades class that they are having a hard time reconfiguring to not be overpowered but be solid all around and I think it is on the right track.

Developer Comments: We’ve heard your feedback that golems don’t feel valuable enough as skills. Without giving them a larger overhaul, we hope these changes will make them feel powerful enough to use more often.

I still think Blood Golem needs something else to be used in any scenario outside of a tournament or fun.

Developer Comments: After seeing feedback to the removal of area damage scaling in our PTR Balance Patch, we agree that it is an interesting mechanic that is worth trying to balance properly. We’ve reworked how the proximity damage bonus is calculated while retaining the 200% maximum possible damage bonus.

Ok.  Fist of Heavens is now probably Overpowered beyond any reasoning.  It literally is crazy that Holy Bolt now damages Demons.  Thorns is interesting and I’ll try a build at some point with it. The aura changes seem to be going through some changes to make them viable with the scaling.  Let us see how long it takes to find the medium.

Developer Comments: Our hope with these changes are to continue to bring the non-Act 2 mercenaries up in viability so that they see increased usage, and to push each one further into their class archetype by allowing them to use class specific equipment.

If you didn’t read my overview of mercenary changes from a few weeks ago, check it out!

Okay.  Rogue seems like it maybe a tad better, but I still think she needs to have Magic Arrow as her base attack.  Why not crossbows as well at this point.

Iron Wolf:  Not good.  To weak and don’t cast enough.  They really need to make new skills for them to specifically use.

Act 5 FRENZY BARB:  Looks good to use overall.  I do wish they would have one that used battle cry instead of just taunt though.

Glad to see that Plague got some love and Assassins have a viable non-ww claw to make. (Heck, pair it with a Chaos for the +skills).  The polearm/spear combo Runeword are nice, though I would still generally wish they made spear class specific ones that were on par with them.

The increased unique density in new areas is a great thing as if you don’t increase that density no one would run them.

Hopefully the AI is a bit better, though I really do want mercenaries to focus more on attacking than moving in the case of Rogues and Iron Wolves.  I want a refresh on Vendor and how about updating them in Hell to have a higher chance to spawn Elite bases.  Act 1 bug still persist.

Offline scaling stays which is a nice blessing.

Overall, it looks like some good updates to the patch are in place with a few minor tweaks to go.  Can’t wait to see this patch live!

So they have re-screwed up Wereform?
What happened to "We are not going to mess with a classic?"

"As for werebear – we want to deliver on the fantasy of a powerful, unstoppable, killing machine"
They have clearly never used Hunger.

I'm assuming this patch is going to auto update so we have no way of avoiding it? Honestly I wish I had never wasted my money on this and stayed in Legacy. The ridiculous load times make running anything really tedious.

I'm happy for the changes, but there are a lot of reasons to stick with legacy for the SPF. Then again I view it as an entirely different game.