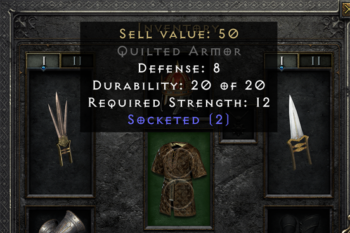 Some Diablo II items have sockets, in which magically infused gems, jewels or runes can be inserted to induce their magic powers to that item. These items will on themselves not provide any bonuses to a character.

Socketed Items can be complicated, mainly in the number of sockets and how to add sockets to existing items. There are three Cube recipes to add them, as well as the socket quest in Act V. Also items can generate with a variable number of sockets, and how many depends on the monster that drops them, the item type, and much more.

You can never add a socket to an item that already has one or more sockets, with any recipe or the socketing quest reward. The only partial exception is the 3 chipped gems + 1 magical weapon recipe, which will create a magical weapon with new properties and 1-2 sockets. This doesn’t add sockets to the existing weapon though, since it is rolling new mods on the weapon, so is essentially random.

The Socketing quest adds 1 and only 1 Socket to any of these types. Rares may spawn with 1-2 sockets from the Mechanic’s prefix, and some sets and uniques have 1 or more sockets inherently, and can’t have more added. You will never get more than 1 socket added using the socketing quest on any of these items.

Rare items can also have a socket added by a Horadric Cube Recipe. This requires 1 Stone of Jordan + 3 Perfect Skulls + One Rare Item. It’s basically the same as putting that Rare item in the socketing quest reward. It can’t be used on an item with sockets already.

Magical items can have 1-4 sockets, depending on the prefixes and the item type, and you can never add more sockets to an item that already has one or more. For magical items without sockets, using them in the socket quest reward will add 1 or 2 sockets, selected randomly.

There is a recipe for magical weapons.

This results in a magical, socketed weapon that can be rerolled again with chipped, normal or flawless gems as many times as desired. Weapons which cannot have sockets (like throwing weapons) won’t get any socket and those with a maximum of 1 socket (like a few daggers and wands) have no chance for two of them. The issue of possible affixes (or bonuses to single skills on wands, orbs etc.) is beyond the scope of this article. It follows the normal rules for the generation of magical items, see the Item Generation Tutorial for details.

Normal items can have from 1-6 sockets. How many a given item can get is random for most item types, but the maximum is always limited by the mlvl of the monster that drops the item, item type and in the case of naturally spawning sockets the difficulty level. Items can only naturally spawn with a maximum of 3 sockets on normal difficulty, 4 sockets on nightmare and 6 sockets on hell. This limitation only applies to sockets that are spawn naturally, not ones which are added through the cube recipe or socket quest. Check the master table below, or the individual Armor and Weapons pages for info on how many sockets are possible on given item types.

Trade for it if you have to, or ask in games, most people don’t save socketed items, so you might ask as soon as you join, say you’ll make 100k for a 5-socket Ogre Maul, for example, or trade more if someone drives a hard bargain. If they aren’t keeping it, they’ll only get 35k at most for the sale, so shouldn’t be too greedy.

How to Obtain Socketed/Socketable Items

To find socketed items you want to kill a lot of monsters while wearing as little Magic Find % as possible.

The key is to not have any Magic Find, since the more of that you have the more likely items dropped will be magical or better (Rare, Set, Unique). Zero MF is best for finding socketed items, but if you can’t avoid a small % bonus, it won’t make much of a difference. The best characters for this are probably Sorcs for the high-level areas in hell mode and Javazons for the Cow level, where each can kill at a tremendous pace.

You want to be in as big a multi-player game as possible, so more items will drop, though this can be taken too far. If you don’t have a power character and it’s taking you much longer to kill in an 8-player, you could drop down to a 3-5 player and still have lots of items dropping, while killing so much faster that you actually get more items than you would taking twice as long in an 8 player game.

How to Unsocket an Item

To remove items from sockets place the following in the Horadric Cube:

Several Cube Recipes were added in v1.10 to make socketed items. Players can now turn low quality items into base quality (white) items which can be socketed via the socketing quest, or via a cube recipe.

The master list, with items sorted by Ilvl and alphabetically.