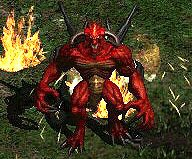 When attempting uber quests you need some initial steps:

1. PERM YOUR GAME FOR 5-10 MINUTES! To perm you just idle the game for 5-10 minutes. The reason you perm the game is to give you a little bit of time if the game does get a connection interruption or if you die to get back into the game and get your torch.

2. All character must be in act5 hell diff but do NOT have to kill Baal.

3. You will have to search for keys. Keys drop from 3 monsters in the game: The Countess in the Black Marsh Tower in act 1, The Summoner in the Arcane Sanctuary in act 2 and from Nihlathak in the Halls of Vaught in act5. All three of these villains have specific things about them that make them dangerous:

IMO the hardest thing about her is her minions she has surrounding her. She is sometimes capable of having auras, I have seen Might being used. This will be bad when the 10 or so minions come running at you at full speed. The Countess in general i dont have any problems with her and her minions are Immune to Cold. A light sorc would take quick control of her. She drops the Key of Terror.

Finding him is a pain if you are legit about it. Summoner being the easiest IMO has no immunes he is a sorceress and with +cold and fire with res you will do fine. Sometimes there are hordes of Minions to contend with they are often Cold Immune and Fire Immune. He drops the Key of Hate.

Nihl as i refer to him as is by far the hardest. He can spawn lightning immune but seldom does so. He is most dangerous from his Corpse Explosion. I have seen Trap Sins with Death Sentry work best against him or a hammerdin with natures peace or any pally with redemption aura (phoneix runeword). this way he has no bodys to explode. Nihl drops the Key of Destruction.

4. Take the keys you have got from the above super uniques and put them in the cube 3 at a time, to open the portals.

Kill Lilith – she looks like andy and is sometimes refered to as Uber Andy. she is very powerful and her poision is very dangerous. be sure to have lots of psn res and antidotes as you will lose lots of health if you dont. IMO her Poison Spray is her deadliest attack. A smiter is best when fighting her. She appears in the Matrons Den. She drops Diablo’s Horn.

Kill Uber Duriel – he is by far the easiest, usually spawning close to the waypoint and tp at the Forgotton Sands, I’ve had on occasion had to look for him around the Forgotten Sands. He uses the aura Holy Freeze which i would say makes him kinda dangerous. he slows you down, with a ias smiter or a a really well built sorc you can easily take him down. He drops Baal’s Eye.

Kill Uber Izual By far the worst only due to the fact where he spawns in the Furnace of Pain he may have pit lords with res to everything except physical dmg, thoes witches who curse you to lower defence or he can have Oblivion Knights which can Iron Maiden (IM) you and kill you or your merc. Izzy is able to teleport and is quite strong. but if you are able to kill his minions he will fall easily. Smiter again is best build for this villain. He drops Mephisto’s Brain.

5. After you have picked up each organ (eye, horn and brain) this is now called an organ set. with this you are able to create a portal to UBER TRISTRAM. In Uber Tristram you will face Uber Diablo, Uber Baal and Uber Mephisto. each are dangerous in their own ways.

Uber Baal: he has all of Baals original moves but is much MUCH faster. He casts Mana Rift which sucks for any character unless you have med or Leach Mana. this makes Baal difficult to kill, he regenerates Life at an alarming rate. He casts a Curse that drops ur def by 95% and if your unlucky he can duplicate himself which makes him even more dangerous. a good way to face baal himself is to go behind this house and have him teleport to you. easily defeated with a Smiter with mana pots.

Pandemonium Diablo’: *he is called this to make a common difference from the one which dropps the anni* Much stronger and Faster than the orginal i feel is much more of a threat than baal for some reasons… One. his bone prision may affect you from hitting anything. two. His Armagedon is much stronger and is able to kill you in seconds if you stand in it. Third and probably the worst he spawns Minions. Pitlods with res to everything except physical damage, Dark lords and spectars which are both immune to Physical dmg. *Best char is a Smiter against Pandemonium Diablo*. I would look into having another character help you with the other minions that he spawns. I usually use my Light Sorc to kill him and his minions minus pit lords.

‘Uber Mephisto: IMO and most others *if not all*. His worst attack is an aura he uses, Conviction. This aura level is so high it can take ur res down to the negitives if you have the bare minimumof 75. He uses Blizzard, Litghtning and he is 110 res to lite dmg and psn dmg. he spawns lots of minions which also can be used to make an uber leveling game. he spawns minions by the second, he spawns these minons when you get close to him. These include: Mages (cold, psn, fire, lite), Archers with major psn dmg and melee skeletons. Mixed with his conviction is not a good combination for players. *Smiter is best char to Uber Mephisto* When i faced the three i went to get mephisto himself and ran around to *the baal house picture* to face the other two. This makes it easier to set up and uber and also to face all three.

If you are able to kill all three without dying GREAT JOB! You have successfully defeated everything for an uber trist game. And now you get a Unique Large Charm. When identified you will get a Torch. The stats of this torch are as follow:

Also, Standard Of Heros or SOH’s drop. multiple if you are in a game with more than one person. It looks like this. It is unknown of what it is used for, there are many different rumors around beacuse the rlvl is: 90. But i believe it doesnt do anything.

Well, im sure u know about uber trist and how mephisto spawns minions when some1 joins and walks near him. well uber trist leveling is a way to gain tons of levels using that same concept.

The 1st thing you will need to do is PERM your game. To perm you stand in the game for 5-10 mins to allow if the game drops due to a c/i or you die and want to rejoin that it won’t disappear. This way you wont lose your organ set. After you’ve done that and opened the portal, the next thing is to kill Diablo and Baal. After they are taken out. You must trap meph. In order for uber trist glitch to work he has to be in this house **Meph’s House** This is the last house furthest away from the portal.

TRIGGER – the person who will stand where you’ve trapped meph *usuially in the house at the bottom in the middle*. Triggers job is to stand near meph to get guys spawned but far enough away to not get killed by his blizzard. **Trigger stands here**

TARGET – the person who has the monsters spawn on them when the TRIGGER stands near meph. *Usually a high level hammerdin* target is the last person to join an uber trist game. if a char joins after the hammerdins, then u get 1 hammerdin to leave and the char who joined. when the char re-joins then you can then call the hammerdin back.

BW’er – a Necromancer who uses Bone Wall (BW) to spawn more creatures *this is referred to as glitching trist.* The necro puts a single BW between the fire at the north and the west wall. **BW SS Here** You don’t need a trigger if your using this bone wall technique the bone wall will spawn the minions. However, if the spawns don’t immediately come you may have to stand near meph for a second then go back.

LEACHERS – are low level to mid level characters who don’t do anything except stand in trist and gain mass amount of experience. *they stand in the enclosed area by the fire at the north end. **Where LEECHERS STAND** They are able to go from level 1-40 if glitch is done right before the 1st reset.

SPINNERS/HDIN – You get two/three hammerdins *two are enuff but 3 are the best idea due to the immense damage that they will sustain* make sure 1 is using Concentration and the other uses cleansing MEDITATION IS A MUST!! The “SPIN Area” which is where they spam their hammers, there is a specific spot for this. Usually stand to the side away from the leach area so the leachers don’t die. **Spinning Area**

RESET- Is when everyone gets out of trist when the walls start to disappear. They disappear due to the mass lag that has started to form in the game. At reset everyone goes out of tristram and they can stand there for 20seconds. This is to allow Trist to lose the lag created from the spamming of spells. Once that’s done, you may go back to trist and do the exact same thing over again.

When you feel you’ve gone as far as you want usually I only go till 90 in uber trists then baal runs are better. Then you kill Mephisto. REMEMBER!!!! Killing the ubers are easier when there are one maybe two characters in the game.