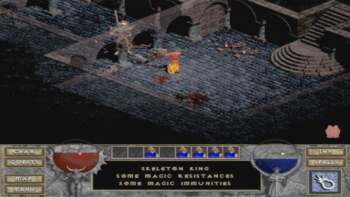 Leoric is much different in single-player and multiplayer. These are some tactics that have worked for me in each.

There are two difficulties with Leoric in single-player mode. The first is that he “resurrects” his skeletons (a weird concept). The second is that the mini-level he is on doesn’t have the room for creative tactics. The good news is that the level is a set-piece, it’s always the same.

All three classes need good helm and armor. The rogue can get by with just her bow. The warrior should have a pretty good shield and blunt weapon (swords do 50% damage against skeletons and blunts do 150% damage, or triple the damage of a sword) as well as a bow. If the mage knows Holy Bolt, he’s in good shape. Otherwise, just pretend he’s a warrior — good luck 😉 A belt full of full healing (mana for the mage) and a Scroll of Town Portal completes the gear.

When you get down to Leoric’s, start by going slow (always good advice) and clearing out the area you can get to without opening any doors. There’s a few archers on either side of a solid grating that will give you some trouble, just use a bow or Holy Bolt to clean them out. Keep shooting (or casting) through the grating, firing in an arc and listening for the sound of skeletons being hit or dropping. Move along the grating, trying different positions to shoot (cast) from. If you get lucky, you’ll activate Leoric, and he’ll come to the grating. Just continue to shoot him, and any archers he resurrects, till he’s dead. After he’s dead, or when nothing happens after a bunch of shots, go back to your main weapon and start clearing out the two side rooms.

Now, put yourself in the place of your character, facing the grating. You’ve got a door to your left and one to your right. Open the one to your right, clear out that room, throw the lever in there. Another room becomes accessible off the one you just cleared, clear this one too. If Leoric is still alive, cast a Town Portal in this room. Now, go to the other room and clear it out. When you throw this lever, the grating you had been firing through goes away.

If Leoric is still alive, go through the opening where the grating used to be and try to get far enough in to just activate Leoric. Once he starts moving, lead him back to the doorway to the room where your Town Portal is. Don’t worry about killing any of his hordes yet. Once you get him in that doorway, go toe-to-toe with him, drinking a pot as necessary. If you run out of pots on your belt, cut for the portal, get some more, and go back to try again. A rogue with a bow, warrior with a blunt weapon, or mage with holy bolt should be able to take him down without refilling supplies.

The longer you take to kill Leoric, the more of his archers he resurrects and the harder it is to get anywhere. The inner door gives you the best defensive position that I’ve found on this level.

After Leoric is done, the rest of his minions are just plain skeletons and should give you no trouble. Be sure to hit all four of the crucified skeletons. And the crown Leoric drops is probably the best headgear you’re going to find for a while, especially for the warrior who will probably not need another pot of health till level 10 or so of the dungeons.

BTW, If you save your game before going down to Leoric’s, and you find that you just can’t beat him, try clearing level 4 (for the experience and gear) and then coming back.

For both the rogue and mage, the trick to killing Leoric for a low-level character is to hit without being hit. A rogue needs her bow, a mage needs holy bolt. If you’re playing a mage and don’t have holy bolt, then I’d suggest that you either skip level 3 (just find the stairs to level 4 and play there), or start new games after finishing level 2 till you get it.

OK, what you need is a big open space. One of those rooms with four pillars is good, a couple of them connected by short passages is better. Clear them out before activating Leoric (if you can’t find rooms like that, or have already activated Leoric before you find them, I’d suggest starting a new game). After you’ve activated Leoric, draw him off to the big room. A few of his buddies might come along, but that’s OK. Just dodge Leoric and get his minions till it’s just the two of you. This takes a little footwork, but Leoric pauses often, so you’ll have some time.

Once it’s down to you and Leoric, just dance around and avoid him. But keep him on your screen. Whenever he pauses, shoot him or cast holy bolt depending on your class. Don’t bother to try to hit him when he’s moving, you’ll just waste arrows or mana. It’ll take a while, but eventually he’ll die.

The best bet for a warrior is to use Holy Bolt if you have a decent level HB (about 4 should do). Warriors don’t do too well with spells, so an alternative is to use the best blunt weapon you can find or buy (swords do half damage to undead, so even bare hands can be better). If you are going to go the blunt weapon route, be sure to have a full belt of full heals, and put some more on the dungeon floor where you can pick them up fast. Best bet is to try to get Leoric as he’s coming through a door. Beat on him, drinking potions as needed. When you get down to your last potion, go to your cache and pick up eight more. Repeat till done — it may take a while.

Of course, high level characters will have a lot of other options, most of them faster than this tactic. But for a low-level character this will work, although it is boring.

Leoric has a substantial life-stealing bonus in multiplayer (but not in single-player, where his special ability is to raise skeletons). His life steal is basically 100%. He adds the entire damage of his hits to his hit points, and he can actually exceed his full health by whacking you.

This underlines the importance of the “don’t get hit” strategy very clearly. If your new character is dealing 10 points of damage and Leoric hits you for 6-16, he can easily heal more back per hit than you’re dealing to him. Even if you’re not in danger of dying from his blows, you’re allowing him to extend the fight with every hit he lands.