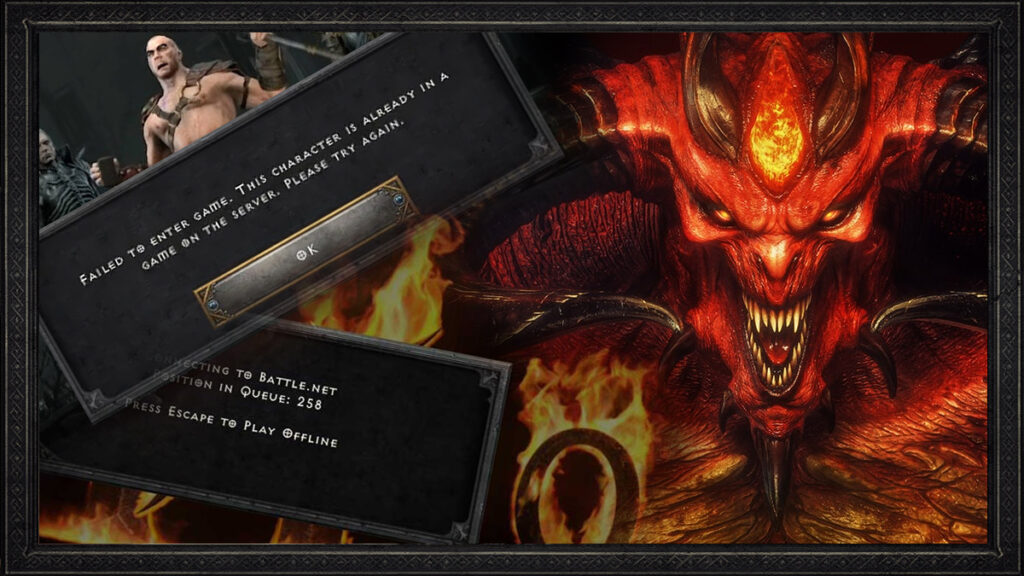 September 23rd seemed to take forever to arrive after the open and closed beta tests. It finally arrived and everyone jumped into the game, some for the first time. So what is the Diablo 2 Resurrected status one month after release?

The game launch actually went reasonably well for about an hour before things started to get troublesome with players having connection problems and lag. To be fair, this was to be expected, it’s a Blizzard game and there are not many Blizzard games that launch without a hitch.

Despite fixes going in place within around 7 hours, the next issue was players getting stuck in games and unable to join new ones. All this was within 48 hours of launch which at the time was a little worrying.

Since the second day of launch, it’s been problem after problem with server connection issues. Blizzard’s first statement regarding the cause of these problems explained a little about what was going on. They probably didn’t realise what was coming down the road as they tackled the characters being locked out issues. 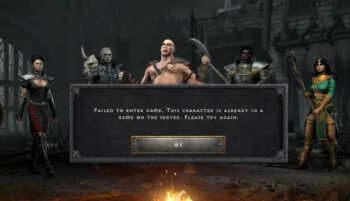 It wasn’t until 14 October we finally got the more detailed explanation update and I’m sure there’s been a lot of server firefighting going on between launch and then. That said, somehow they didn’t know how players actually played Diablo 2 for some baffling reason. You would think after 20 years of the game being actively played someone sitting around the table would have explained Pindleskin runs. Lots of players connecting to the servers time and time again. It was always going to be an issue.

Communication from Blizzard has not been brilliant as far as explaining what’s happening via CS messages pushed onto Twitter and that’s frustrated players. I’ve certainly noticed console players have been quite vocal about connection problems and perhaps that’s because they run into these kinds of problems slightly less than PC players when picking up new games.

With that frustration comes calls for refunds. That won’t be happening so you may as well forget that now. It is interesting though that a game such as Cyberpunk 2077, which had a terrible launch if you were a console player, was pulled from the PSN and Xbox stores. It was playable, but it was a mess and glitchy. The saving grace for Blizzard is that the single-player game is perfectly fine, it’s BattleNet that’s the problem.

We’re now one month and there are still problems being ironed out when it comes to playing online. The interim fix of queues to create games has become really frustrating, almost to the point where it’s just not worth it. Last weekend saw wait times of around 30 minutes. As someone who would usually play multiplayer on LAN, the fact LAN has been removed makes it even more annoying.

Considering there are a lot of us who are now a lot older and have other commitments, gaming time is harder to find. For Blizzard, the queues are a problem because older gamers are their core audience for Diablo 2 Resurrected. We’re the gamers encouraging the younger generation to try it. We’re the ones explaining why Diablo 2 was such as landmark game. We’re the ones who understand how to play the game and then pass that knowledge on.

Patience is going to be the key to Diablo 2 Resurrected. It’s now apparent it’s going to take time to get these issues ironed out, issues that should have been anticipated and dealt with during a longer and larger beta test. Blizzard knows this but they also have to try and learn from these mistakes. Whether they will or not remains to be seen but being underprepared seems to be Blizzard’s Achilles heel.

We’ve been playing the game on and off for the past two decades and will continue to do so. Waiting for these problems to be finally resolved is not much of a hardship. For the younger more impatient gamer, they want things fixed yesterday or they’ll move on to the next big release if the problems are not fixed soon. The user Metacritic score highlights the frustration of players as it’s currently sitting at 3/10. That score would probably look very different if it wasn’t for the online technical difficulties.

There’s no doubt this has been another botched Blizzard game launch and I have huge amounts of sympathy for the Vicarious Visions developers who have been let down by the online tech.  As a remastered game, it’s pretty solid. Finding that perfect balance between simple changes while keeping true to the original experience is what the community wanted.  Be patient and have a little faith, these problems are not going to be here forever.

The most rewarding aspect of the Diablo 2 Resurrected launch has been the community. When we started on this journey in the late nineties, we had no idea how the community would evolve. What’s been striking this time is the number of players from the old days that have come back to join us.

The forum has seen quite a lot of reintroduction posts from community members we’ve not seen for years.  We remember nearly everyone that has resurfaced because at some point we will have interacted with most of them. It’s been great to see so many familiar names.

When we launched this site last year after taking some time out, we had no idea how things would go. We’ve spent many months compiling resources, weeding out less important information, and focusing on the important content players really need. This process has been interesting from a re-learning point of view. There’s so much that we had forgotten too. 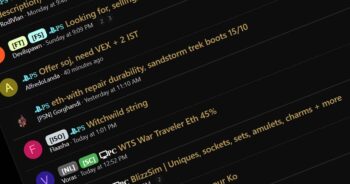 Resetting up the Trading Marketplace has been great fun. We took what worked well back in the old days of trading and applied it to the new systems. Trading platforms went through numerous iterations in the early 2000s until we settled on a system that is similar to what we have now. It’s also going to take time for the market to settle, there are still so many new players trying to get to grips with the economy. The good news is, trading is proving as popular as ever and I want to thank Nokk for all his help in making trading here a solid experience. Let’s not forget his price guide too which has proved extremely popular.

Guides have been really helping new players get to grips with the game and the Guides section has been really helpful. Digging out the older more useful guides from old HDs was a task in itself. It was also important there were new guides and the guide author team did a fantastic job at getting guides online in time for launch with that the project being led by Maxicek. Just about everything in Diablo 2 has been covered over the years but you never know, someone somewhere may come up with some crazy build idea. Thanks to all the new guide authors for their input and wisdom.

A huge shout out to all the PurePremium supporters who for the past year have been chipping in to help us keep the Purediablo ship afloat. Without contributions from the community, it would make this whole project almost impossible. We all have jobs and this is by no means a full-time gig for any of us. It has to be funded somehow whether it’s for hosting or updating scripts that keep PureDiablo running so every penny matters.

It may seem odd that we’re still thinking about future plans on the site for a game that’s so old. We are however always looking at improving the site by adding new things to help the community. For example, we never thought too much about an in-game overlay app but we thought, well, why not? Nekro has been instrumental in helping with that and this project was another example of how we hope the community will become involved with what we do on the site in the months and years ahead. This is a site primarily for the community.

There is of course Diablo IV still to come so we’ll keep building on the site and supporting that as the game continues to be developed. There’s still plenty more Diablo to come. PureDiablo is a passion project and we always have ideas on how the community can be better served. We’re always working on something in the background. More on all of that in time.

This shows how I should not even look at Metacritic scores, ever. This is (at least) one of the best games I ever played. Maybe the best, but top 3 definitely. A few weeks of minor issues, while annoying when they happen to you, aren't going to affect that.
I do wish LAN was back, I may not even play Bnet anymore. It would also provide means to continue playing if Blizz shuts down the service, but hopefully that is going to be very far in the future.

I think the online issues are going to kill any life out of this game. Old timers like myself might still keep playing a bit but if you have to wait 20min on consoles, where the game isn't even that popular and has serious lobby and chat shortcomings, it is hard to keep doing that.

I think they seriously need to nerf teleport and people creating numerous games within a minute. I have a feeling they won't be able to fix the game without doing that. The game was never intended like that anyway.

Overall, the underlying mechanics of the game is great and remains true to original. There is aton of depth if you don't play the Uber characters (cold sorc, hammerdin, etc.) Graphics are also good. Too bad the online features which are also important are very bad.

Teleport works as intended for the past 20 years.
What needs fixing is their network backend.

Teleport works as intended for the past 20 years.
What needs fixing is their network backend.

I don't think the game has seen anything like what is happening now with possibly tens of thousands of games created within a few minutes solely for farming. I wasn't around all these years like some of you but earlier on people who farmed actually played the game. Now there is little interest in playing the game (just look at all the Xbox threads on their gamecard and it's all about rushing to hell, speedrunning and farming all the time. No idea which region is overloading their servers but if it is Asia, it wouldn't surprise me majority are creating so many games each minute.

This is not a new release so it probably hasn't sold much and I doubt Blizzard can afford to spend too much to upgrade their systems just for this (hence no response when asked about console lobbies/chat/etc, NintendoSwitch issues, etc.) So they only solution i see is to restrict teleport (which results in games being under a minute) or restricting extreme-farming which results in same issue. People questing won't be impacted and they rarely create games every minute.

I don't play offline but from what I understand those players are having issues too (crashes arising from patches for online issues it seems??). Without major financial investment, I just don't see issues being fixed.

498 queue at the moment
Blizzard needs to fix this asap