I’m assuming a newbie player and a low level (around 6) character, either single mode or normal solo-multi. Higher level characters should have this figured out 😉

Make sure you have levels 1 and 2 completely cleared out (except for the Butcher, of course) for the experience points, equipment, and, on level 2, room to maneuver. Then there are four tactics you can use:

The Purist (a.k.a. Suicide) 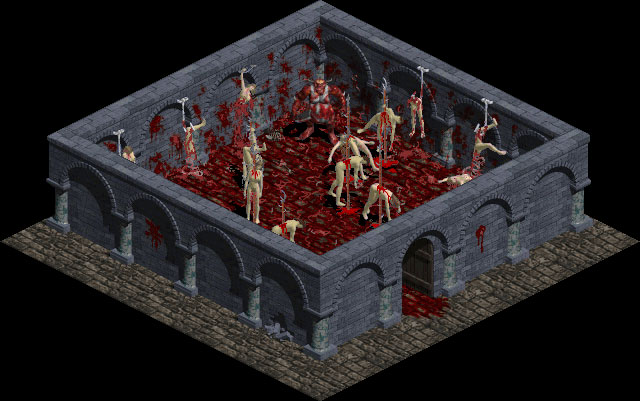 If you’re a warrior, start hacking. Watch your health, and guzzle a pot as needed. Odds are you’ll run out of pots before you run out of Butcher. Click on one of the pots you dropped earlier. As soon as you get to it, click on another. The idea is to pick up the pots as you run from the Butcher. When you’ve got about four on your belt, let him catch up (won’t take long 😀 ) and go back to hacking him. Repeat as needed. If you run out of pots (or nerve) use the Town Portal to bail out.

For the mage or rogue, things are a little easier. Shoot or cast a couple of times as soon as you’ve opened the door. Then start retreating around the Butcher’s room. The technique is run, shoot/cast, run, shoot/cast, etc. The mage will probably have to guzzle all his pots and pick some up (like the warrior). The rogue may not even need one if she does a good job of staying ahead. The Town Portal is your parachute, use it as needed, but remember that the Butcher will be partially or totally healed when you get back. An aside for the mage: the Butcher is not undead, so Holy Bolt does nothing to him. Hot key Firebolt and Heal, toggle as needed. For the rogue: stay off the shift key, it slows down target acquisition. Just make sure you’ve got the Butcher targeted when you click his way.

Even for an experienced player, these methods sometimes fail in single and usually fail in multi. About the only plus is that you get some practice in playing your character and even the most rabid anti-cheater will admit these are *fully* legal <g>.

Boots questioned if this method was possible since the Butcher moves as fast as your character. I hadn’t used this method in quite some time, so I went back and re-tested it. The warrior was able to kill the Butcher easily (less than a belt of reds). The rogue was able to do it, but not nearly as easily, and it took quite a while. I tried about four or five games with a mage, and I was not able to do it at all — ran out of blues and money before I ran out of Butcher <grin>.

While it is true that the Butcher moves as fast as your character in an open space, you can get ahead of him by going around objects (pillars, etc.) or around corners. Also, when the Butcher gets adjacent to your character, he stops to take a swing at you. If he misses because you are moving away, you open a one space lead. With some nimble mouse work, you can shoot/cast, move, repeat. Expect to get hit a fair number of times. After all, this method is “a.k.a. Suicide”.

This tactic, and the next, work because the Butcher can’t open doors. Find or buy a scroll (two would be better in multi) or staff of Firewall. Stand right in front of the Butcher’s door. Open the door, cast Firewall right inside the door, then close the door. Wait for the death scream.

You have just enough time to do this before the Butcher gets to the door. If he gets there before you close the door, you’ll have to fall back on one of the other methods, so it pays to have Plan B ready. Also, if your coordination is like mine, you might want to find another door someplace and practice a bit till the “left click (open), right click (cast), left click (close)” is fast, smooth, and the door closes every time.

One Firewall has always been enough for me in single mode. In muti, sometimes the Butcher outlasts the fire. In this case, you have to open the door to finish him off. You can fall back to Plan B, or you can cast another Firewall right where he’s standing and go toe-to-toe with him. Since he’s already been hit pretty hard by the first Firewall, and he’s picking up more damage from the second, he isn’t going to last long, and a few pots of health should see you through.

A really quick person might be able to cast two Firewalls before closing the door the first time. This would double the damage the Butcher takes and should guarantee a kill in multi. I’ve never been fast enough to do it though : (

For this one, you need to find a door next to a grating. The door must not be blocked (be sure to check this). Preferably, the rooms on either side should be pretty large (more on this later), but take what you get.

As usual, start by opening the Butcher’s door. When you get the “Fresh meat”, start heading to your selected door. The timing here is a little tricky. The idea is for you to get through the door and close it with the Butcher on the other side. If you get too far ahead, especially if you go around a few corners, you’ll lose the Butcher and will have to go back and get him. If you let him get too close, you won’t be able to close the door when you get through it. If this happens and the room behind the door is big enough, you can lead him on another chase and try again. If the room is too small, figure on getting hit bad.

When you’ve gotten yourself on one side and the Butcher on the other, you can cut him down with a ranged attack. For the rogue, this means a bow. For the mage, cast your best spell (most damage per mana). The warrior can use either or a combination of both. The Butcher will constantly move from side to side, so expect to miss a lot. Extra pots of mana for the mage, an extra bow for the rogue, a couple of extra bows and the repair skill for the warrior are probably going to be called for. (I’ve never tried Firewall through a grating. If it works, it should be ideal since the Butcher will just walk in it. But if you’re going to use Firewall anyway, just use the Butcher Bake method).

I’ve seen a variation on this tactic posted, but it will not work in single mode. Basically, find your door with a grating. Go into the room, drop all your gear, cast a town portal, leave the room and shut the door behind you. Now go open the Butcher’s door and lead him to just outside your chosen room. Let him kill you, restart in town, then down the portal. You and your gear are on one side of the grating, the Butcher is on the other. This eliminates the tricky timing of getting the door shut. Never tried it myself, but it should work just fine.

Other suggestions I’ve seen were to open the Butcher’s door with Telekinesis and/or get into your room with Teleport. I’ve never tried either of these, don’t think any of my low level characters ever had the ability.

Apollon posted that it’s not necessary to close the door. Just move down a ways from the door, the Butcher moves back and forth about one square. If the door is not within a square of where you are, the Butcher does not get to you. I haven’t tried this out, but I suspect that it is true — that’s how the U trap works.

A slightly more involved method utilizes a town portal. Before you open the Butcher’s block, find a room with a grating by the door elsewhere on level 2. Cast a town portal in the room, somewhere in sight of the door. When you free the Butcher, lead him to the room, let him follow you inside, close the door behind him, and exit through the town portal. He’ll get in a few hits during this process, so be ready to heal.

Now you’re safely in town and the Butcher is trapped in the room with your town portal. You need simply walk down through dungeon level 1, head through 2 back to the trapped Butcher, and dispense with him through he grate in whatever method you think best.

Besides not being able to open doors, the Butcher has another major weakness. He will not move away from you to get around an obstacle. So, if you can get him into a U shaped obstacle, with you standing outside the base of the U, he will just stand there and stare at you. I’ve done this a few times when I’ve found a bunch of barrels that I could “sculpt” into a U. But there’s a built in U in every game, the stairs leading down to level 3.

As usual, start by opening his door. Lead him to the U, then run in a tight circle around the U till he gets trapped. I found that it’s better to click on the next corner of the U than it is to try to drag the mouse pointer around it, but your mileage may vary. Once he’s safely trapped, use a ranged attack as described for the Grilled Butcher.

This method has some advantages over the others. It doesn’t depend on close timing. And the trapped Butcher stands still, so the number of hits you get on him goes way up. Some “purists” claim that this method is cheating. I don’t understand their reasoning, since this method just takes advantage of the Butcher’s limitations, not of some bug in the game. And the “in real life, he would have gone down the stairs” argument can best be answered with “in real life, I can’t cast a Firebolt!” (And if we could move barrels, instead of just bashing them, we wouldn’t need the stairs).

Except as noted, I’ve used all these tactics successfully in single and solo-multi games with low level characters. Other ideas I’ve seen posted are to use Stone Curse, Golem, and/or Guardian spells. Any of these would probably work, but I’ve taken about 50 or 60 characters past the Butcher and I think that none of them ever had those spells at these levels.