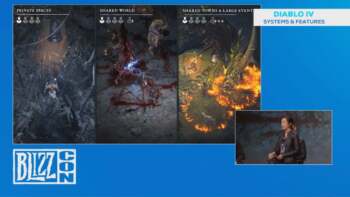 Members of the Diablo 4 development team discuss plans and ideas for game features. Read the full transcript of the event.

The Diablo 4 reveal panel with the development team discusses the features players can expect when the game releases. This is a full transctipt.

Blizzard Entertainment’s online game service, Battle.net, continues to gain momentum as the world’s largest Internet playing venue. Since the beginning of the year, the number of active users has surged to more than 2.1 million and usage has increased by 50 percent. The worldwide dominance of Battle.net was recently highlighted by a weekend of record-breaking … Read more

ATLANTA, May 28 1998 — At the Electronic Entertainment Expo starting today, Blizzard Entertainment previewed for the first time Diablo II, the sequel to last year’s runaway hit Diablo.  The real-time game is currently slated for release next year. In Diablo II, players return to a dark world plagued by evil forces.  After possessing the … Read more

There are going to be “significant” changes when Season 3 kicks off.