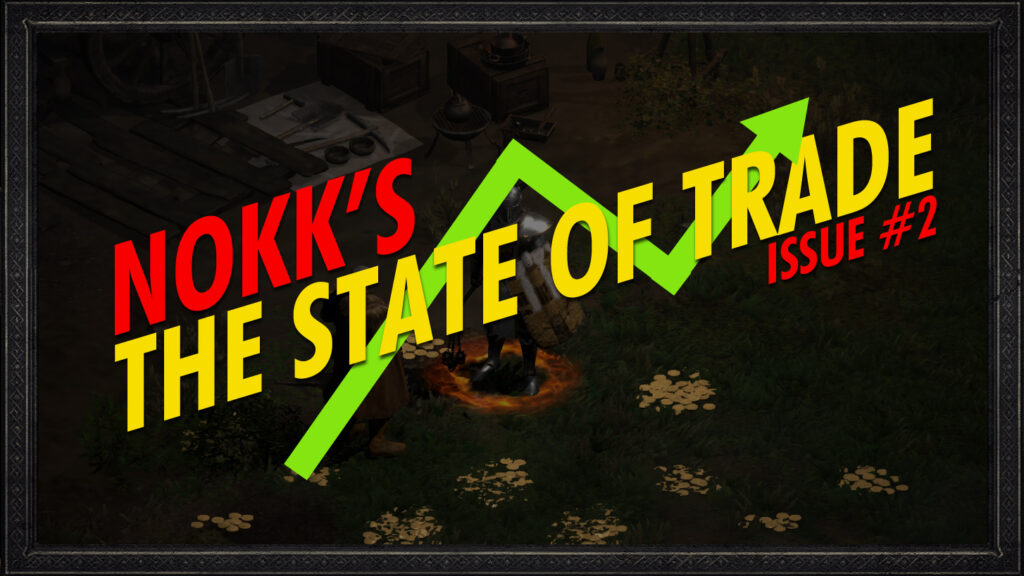 Welcome to the second installment of the State of Trade in the D2R economy. With the launch of Ladder just around the corner / recently announced, let’s take a look at the changes that have taken place in the current economy and look towards how the Ladder economy will shape up.

Short term: We’ve seen it in our price check data and I know that I’ve cut my prices personally across the board. If an item is worth under an Ist rune, it has now settled to what we’d term the price floor. Looking at the legacy pricing data, there is a price point that every item settles into and will remain at indefinitely. When you look at something like Shako, you can see this in action: a week after release they were selling for Vex, held steady at Ist for a bit, dropped down to Mal and have finally settled at Um. Will it drop to Pul? I doubt it, because the price floor is based on the item’s value and rarity – so other traders will buy your Shako for a Pul and then sell it for an Um.

Items that were marginal or a niche case will no longer be worth keeping unless they happen to have perfect stats or something notable like the ethereal quality. PGems will become much more widely traded for, and I’ll cover this with the long term outlook, so be willing to sell for those later or liquidate everything now while it still holds some rune value.

Mid term: As Ladder either winds down or as players migrate back to Non-Ladder, we will see some movement in the economy from this activity. Some players may have liquidated their characters and need to gear back up. Others may try Ladder and decide to go back to their old characters. A large minority will begin to PVP as they have long since reached the endgame with their PVM characters. Stocking up on staples like Jalal’s, Titan’s, HoZ, etc will be worth your time because these items are eternally useful – at least for patch 2.4. Returning players who need to re-equip or those who are trying out new classes will need those items and will keep that market stable.

The PVP market is going to become much more active as Ladder progresses. Expect players to want to break up the Ladder grind with a little bit of PK. This market has sustained Diablo 2 for years beyond its original life span, so the rules that applied then will begin to apply now. Charms, jewels, LLD gear and certain magic items will become much more valuable because of the increased demand and the lack of supply. Keep an eye out for these items and if you aren’t sure what is worth seeking out we have a guide or two for that purpose.

Long term: When Ladder ends, look for an infusion of wealth into the economy as all the Ladder characters become Non-Ladder characters. Like we saw in the medium term, the demand for ‘trophy items’ will continue to drive the Non Ladder market. However, with this massive influx of new wealth it will create excess surplus (so common items are worth less) and it will dump that excess currency onto the market (meaning your runes will buy you much less than before). I fully expect that as currency runes fall: PGems and crafting runes like Ral will become much more valuable – since established characters no longer wish to farm for those. This will help out new players, since they can reasonably farm up these items and get fantastic deals on gear sets for a deep discount.

For established players with endgame accounts, inflation and excess surplus sound like bad things – but it can benefit them. Using your wealth to craft Godly amulets, gamble GG circlets or MF the level 85 areas for ultra rare uniques like Griffon’s Eye will net you even more of those coveted high runes then you could ever need. So turning Vex into HoTO, Ohm into CTA and Lo into Grief until you find a perfect one is possible now – who wouldn’t want a set of perfect runewords? Speaking of perfection, now is also the time to farm for perfect stat gear, it can be worth ungodly sums at this point and will likely be the demand that keeps the Non-Ladder economy humming for years.

Short tem: If you played at release and were successful in building your wealth, then you won’t need much advice from me. If you struggled with getting your gear or you are a new player, this will be of interest to you. Ladder ‘reset’ becomes an extremely lucrative time to trade and find unique items. Laying down the groundwork in the first few days of the ladder release will determine how high of a trajectory you will eventually reach. MF gear is worth its weight in gold, along with gear for popular classes like pally and sorceress. However, you also need to trade it straight away to get the most value.

My suggestion is to find the best class for MFing that you know well and get to hunting. As soon as you find something, try to post it for trade ASAP – I’ve written a guide dedicated to trading that might help. Then you need to graduate to the next step, making your wealth work for you. You should become a crafter, start rolling runewords from high runes for resale, or become a key farmer / uber hunter – don’t miss Vang’s guide to Ladder reset for a detailed rundown. This will quickly get the best gear for your character and open up other options like rushing folks, helping low level players, or simply racing to 99 – that’s the point of ladder, isn’t it?

Mid term: So I’ll be honest, I’m not really sure what to put here. Well, I know what I would like to see, but it’s pure speculation at this point. I’m talking about the builds, the mercs, the runewords and the new cube recipes. We don’t really know how things are going to shake out and I really would love to say that I can say where things will fall, but your guess is as good as mine. These changes are going to make things very interesting for the mid-term Ladder picture, that’s something I do know for sure.

Of course, I have to speculate, right? One thing I know for sure, I will be making an Insight bow for an A1 Merc – it is so nice to have that aura on a merc that won’t just charge into combat to get slaughtered. Expect Insight runes (Ral+Tir+Tal+Sol) and 4os Superior Diamond/Shadow Bows (which the Rogue merc uses) to be trading quite well as people re-roll their Insights to get the most damage from this merc. Also, it is safe to say: Sorceress and Paladin will still be the top dogs in terms of power and popularity. Don’t expect any discounts for your Hammerdin or Blizz Sorc gear. Plus Holy Fire and Hydra changes should make their gear choices valuable now.

Be sure to check back for the next installment of the State of Trade where I will track these changes for you.

Long term: No matter which way things shape up, hopefully, you are able to build a nice stash up before Ladder ends. We’ve talked about how that wealth will impact the non-Ladder economy, so let’s talk about preparing yourself for that transition. The first thing is you will probably be limited in space to what you can move over to non-Ladder – so slim that stash down as much as possible. Even if Blizzard does get wise and add a currency tab 🙏 – you don’t want to have work to manage all that stuff. This means trade, trade, trade. You want to turn your stashed uniques into currency, and you want to turn that currency into high runes.

Now that you’ve streamlined, you want to look for items that will be valuable to PVP’ers or other endgame gear. Some players will be aware of the impending reset and act accordingly, like yourselves – but most will not. So watch for trade listings offering charms/jewels/rares and trade aggressively to snatch them up. Once you transfer to non-Ladder those GG items will be worth significantly more currency than what you paid for it – since there is just so much more currency floating around. The last step is to keep hunting for those same items that are still valuable in non-Ladder, so crafting mats, perfect bases and GG uniques. Avoid key running, torch hunting or rune finding – all those items will have become significantly cheaper than Ladder prices.

That’s it for this installment, and I know I’m really looking forward to the changes the devs have made for the 2.4 patch. I hope you are too and I wish you the best of luck in the new Ladder. I’ll be racing to 99 along with all of you, let’s see who gets their first!

Thanks again for all your feedback, and I always get excited when I see your responses to my work. Or just simply let me know what you really are looking forward to doing when Ladder resets. And of course, thanks to the Purediablo team for their continued work to make this the best source for D2R info!

Make sure you check the Diablo 2 Pricecheck section for prices and trade in the Trading Marketplace. If you have not upgraded to D2R it has also been discounted 25% on Blizzard’s store.

Welcome to the second installment of the State of Trade in the D2R economy. With the launch of Ladder just around the corner / recently announced, let’s take a look at the changes that have taken place in the current economy and look towards how the Ladder economy will shape up. 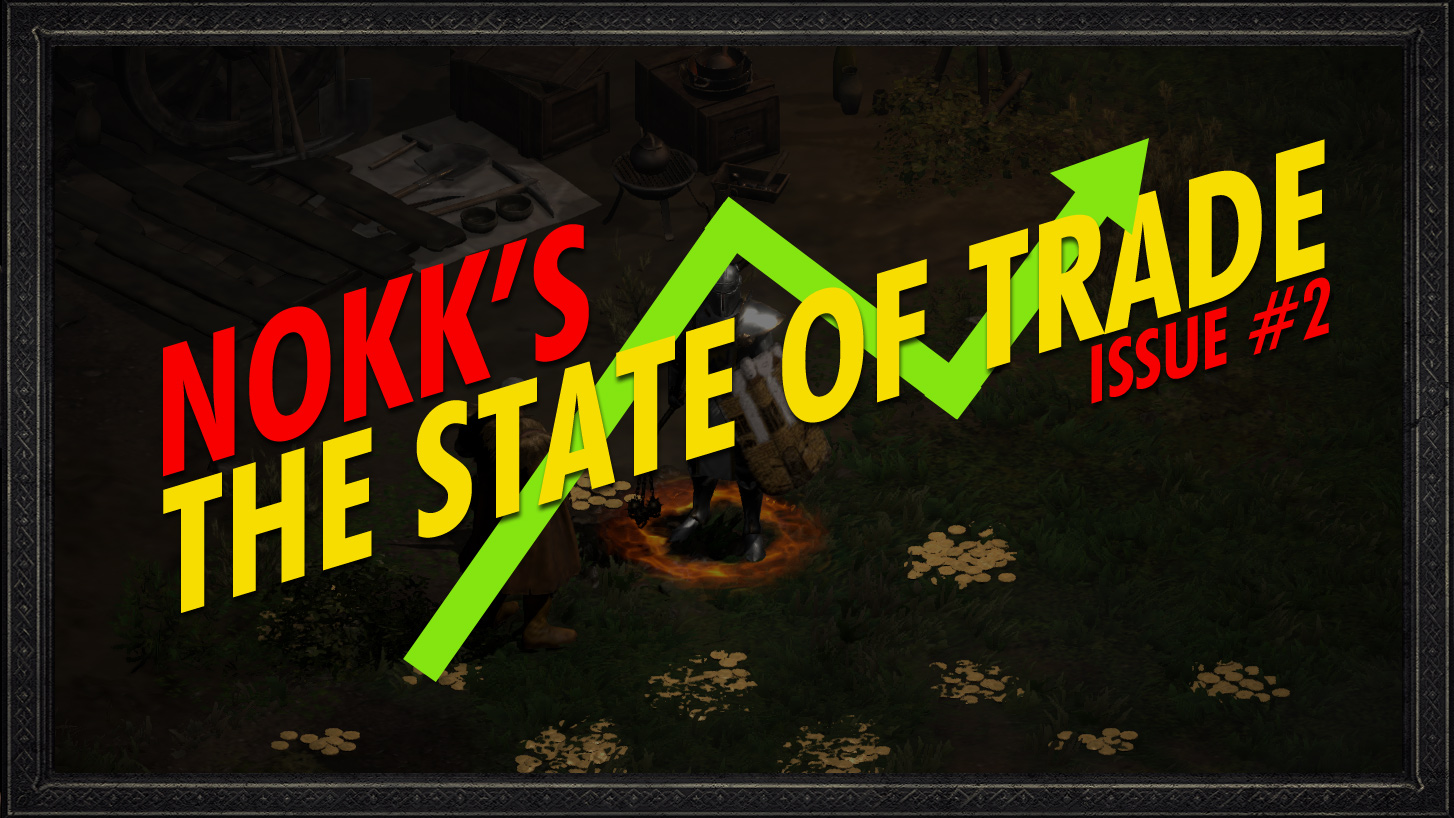 
Nook takes a look at the state of DIablo 2 Resurrected trading as we approach the ladder season.