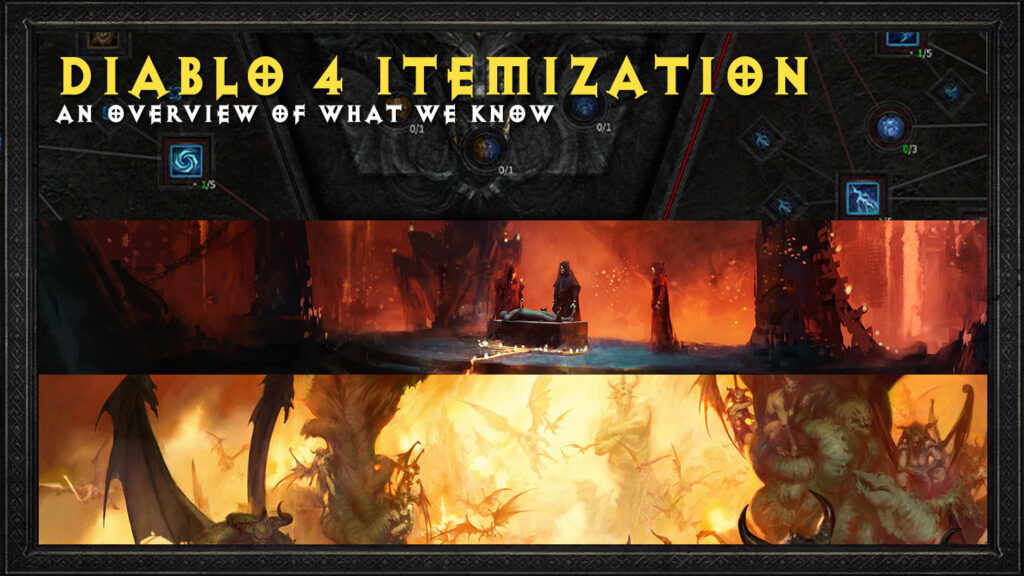 Following along with my last review of the December update on paragon levels, we are diving into what we know about itemization in Diablo IV thus far.

In the first item previews shown in the June 2020 Quarterly update we got two images unveiled:

In this first image previewed we have a few tidbits of information:  The theme of a great war and alignment system placed on items. The 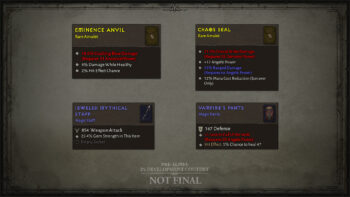 items shown have either an Angelic, Demonic, or Ancestral Power requirement to gain certain stat bonuses.

We also notice that the Staff has Weapon Attack while the pants have the Defense stat on them.  Along with this, we get +1 rank to call of the wild requiring 25 Angelic Power.  Kind of odd for a rank to be listed since they confirmed it in the most recent update that bonuses to skills (ranks) would be implemented.  A big thing I see is no level or stat requirements listed on items in this update. 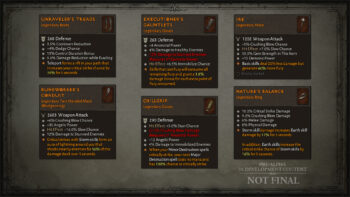 The next image shown has a plethora of Legendary items showing off a variety of modifiers that are in both Diablo II and Diablo III.  This includes:

The first image is pretty much what we saw in the last update showcasing a normal, magical, and rare item.  We see weapons now show an attack speed rating that wasn’t listed in the June 2020 update.  This was detailed in the quarterly update that weapon attack speeds are all the same.  Items also were showcased to show they have inherent characteristics like how blunt weapons in Diablo II have 50% enhanced damage to undead always.

stats as quality level increases.  The Weapon Attack does not change, which I think is great as Diablo II did this by having a base value that was improved only if the increased damage prefix was present. 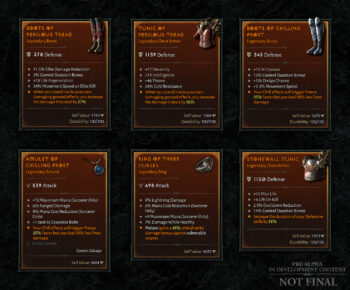 The third image is full of Legendary items again like the second image unveiled from the June 2020 update.  The biggest change we see is that Rings and presumably Amulets

both got an Attack Rating added to them.  Looking more closely we notice that the four main stats (Strength, Dexterity, Intelligence, and Willpower) got added to items as well.  Are you ready for an Obsidian Ring of the Zodiac?

The last image we have previewed in December 2020 shows off 3 Unique items.  The items have the normal mods from other items as well as unique abilities on them.  We also notice a couple other things when looking below the flavor text: 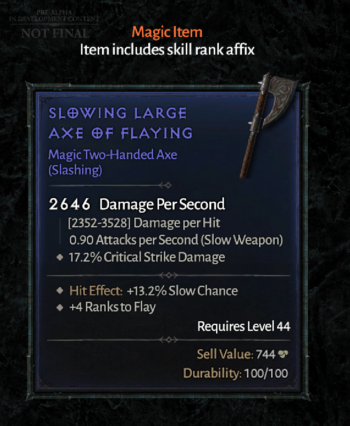 Damage Per Second was added to an item as well as the Damage dealt and attack per second like is present in Diablo 3.  Level requirements also were displayed.  This item they also confirmed the +Individual Ranks (skills) even though they were on items as early as the June 2020 update.

The second and third image is showing the essence system to extract a legendary ability.  You then can apply that essence to a different item gaining that specific legendary essence’s effect. 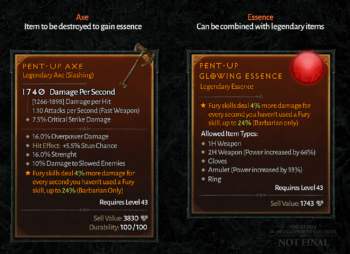 Interesting to note that it cannot be placed into a unique item. This could provide a huge boost to players seeking rare or magical quality items that push the boundaries of great stats for a character.

Overview of what we know and my thoughts on it: 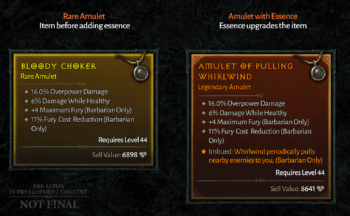 detailed in hunting for items portion of the December 2021 update.  This adds a bit of cool farming mechanic to the game that is similar to treasure class drops in Diablo II.  This is a great feature that hopefully is implemented correctly that it is just a better chance in that area and items can still be found off anything that meets its level requirement to drop.

I’m happy that the Angelic, Demonic, and Ancestral power is being removed, but do hope it finds a way to come back.  Maybe an alternate advancement line in addition to the paragon board.  Character alignment would thematically fit in an RPG and Diablo’s storyline.  Origin traits if you will.

The biggest thing I saw that I liked thus far: The essence from Legendaries being able to be placed in good non-unique stuff.  This opens a ton of doors for itemization, and I love turning powerful magical items into even better ones (+3 skilltab/+suffix for circlets with 2os for example).  A lot of good information, but still just surface-level details until we see more and get our hands on the game.

At the same time, this could all become too much like Diablo 3.  A couple of mods (Critical Damage, Critical Chance, Attack Speed) as primary and everything else is just increased damage by massive numbers with the others not doing much.  I’ve noticed a lack of resistance on items as well overall with the one exception being the Tunic of Perilous tread as it offers 24% Cold Resistance on them.

Until knowing the inner mechanics, I’m going to be optimistic in the itemization of Diablo IV and hope they get it right by leaning on what is found in Diablo II as the route to success.  From what I read and reviewed; it appears that Blizzard’s development team are adhering generally to that measuring stick with some QOL touchups to better represent a future Non-LCS.

OK, so this shall be my A Bit Too Little Condensed Weekend Post™ due to ⭐ SPARE TIME ⭐ (say what?!) so prepare yourselves mortals. 😂

My six greatest issues with Diablo 3 items are:

I wouldn't mind removing critical damage altogether. I don't understand the role that sometimes hitting things for triple damage plays in terms of fun. Let's say a weapon sweep hits five enemies. Then there's a chance that, say, two of those will lose more life than the others because they were critically hit. OK? Is that fun? Over time as you boost it, it'll get mighty influental and overshadow cool skill effects, so it better be fun!

I think they need to weigh the gameplay issues of powers overshadowing others against their actual gameplay value. Critical damage is an automatically activated feature with no real interactive input or skill needed from the player. It just happens every now and then in the background. I think it's boring and should be removed.

But Blizzard won't remove it so next best thing something like capping it at 50% and always do +100% damage. Something nice to have and work for but soon overtaken by other mechanics, character, and gamer skills.

Skill damage is based on weapon damage

In Diablo 3, skill damage is usually based on weapon damage which leads to quirks like when still levelling, a Wizard using a Maul rather than a Staff can be a great idea! Not because the Maul had something on it, but because it was a heavy hitter. Hm. This doesn't jive well with the RPG backdrop and disrupts immersion to me. Only when you get to Legendaries and Sets, you return to fantasy themes, but this only due to unique and powerful mechanics that these items provide.

So, I hope skill damage will only be based on weapon damage when it makes sense. Like an Enchant skill empowering a weapon. Not a Lighting Nova.

When in doubt, pump the primary attribute! It improves a bunch of stuff your character needs! I think this is too dumbed down in Diablo 3 and should probably be reworked. First and foremost, I'd like every attribute to be fixed in purpose regardless class. Dexterity always helping with Dodge and Defense, never with Damage. Strength renamed to something like Offense and helping with Damage for all classes, including spell damage for Wizards. And so on. Rename or fix things to not need the crutches like in Diablo 3 of varying use depending on class. Not sure where Diablo 4 is headed here to be honest.

Chances are you don't even know which elemental damage your current Diablo 3 weapon does. Was it Fire, or maybe it was Holy...? Who cares, it doesn't really matter to anything anyway in any noticeable way! This should be completely reversed and matter a lot more. Make elemental damage fun again! It's not fun to have Immunities like in Diablo 2 so some may shy away from a greater role here, but I'm thinking of giving damage types various additional properties.

I do think Diablo 4 is on a good path here, at least last I heard. Cold damage slowing and freezing, and the new rune system triggering on maybe chilled monsters. Other effects should be poisoned and burning. Make fun things trigger on burning enemies. Maybe a skill that is like pouring gasoline on them.

In Diablo 3, you need resists. But they're half auto-raised and half raised basically all together from gear and you often really don't care much for the details. I definitely think that you need to be better protected against fire when fighting demons and that bonuses to all resists (from items or attributes) should be less common. Remember how valuable that was in Diablo 1 and 2?! For good reason! It makes item choices and gameplay more strategic.

Damage inflation compounded with what I call damage cliffs

I keep being confused over whether this is going to be fixed in Diablo 4 or not. Sometimes it's like Blizzard is aware, other times not. The damage numbers instantly got to the thousands in the pre-alpha screenshots rather than be tighter together and allowing smaller numbers. On the other hand, I think they are aware of the damage cliff from Set Items and doing something about those.

I think large numbers are not only a numerological detail but especially an indicator of steep damage scaling, which in turn is an indicator of overdependence on damage alone rather than applying effects (elemental, curses/hexes, other debuffs) on monsters, strategic player positioning and skills helping with that, etc. Steep scaling also makes items "must haves" and this can cause needlessly early and important grind. Just look at 6P sets of Diablo 3 for an example. You're nothing if you don't wear a complete one or use the special case Legacy of Nightmare to flip the "on" switch (???) to make Legendary builds end-game viable.

Unfortunately, with the latest updates on these topics from Blizzard, I think it's steering too much towards Diablo 3. It's as if they are worried gamers who grew up with Diablo 3 won't recognize more strategic gameplay. Blizzard has said that they're still working on this and reminds us itemization is still in alpha, but they need at least a year of work on this stuff which I hope they are aware of. It's not anything that should need to come as an afterthought in patches. If the atmosphere is the soul of a Diablo game, I think items are the heart.