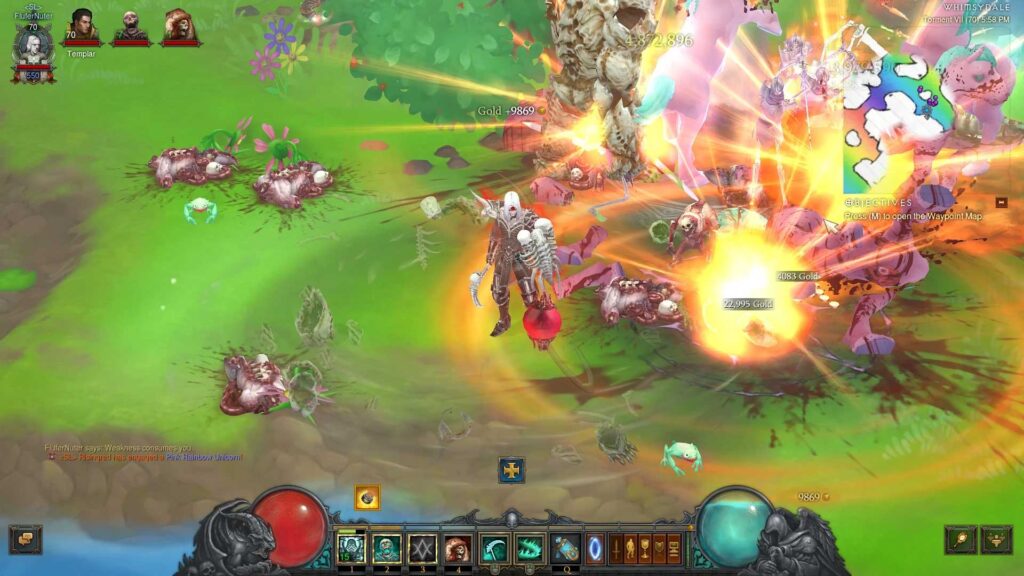 Whimsyshire is the Diablo III Secret Level, a humorous area that’s a direct homage to the Diablo II Secret Cow Level. It requires the Staff of Herding to enter, a special object that can only be assembled from multiple legendary materials and a special crafting recipe.

Patch 2.1 (February 2014) for the PC/Mac and Ultimate Evil Edition added rare rainbow goblins who appear randomly throughout the game and when in the throes of death will sometimes open a portal to “Whimsydale.” This area is identical to Whimsyshire, with a different name for technical reasons. This makes the rainbow special land more accessible for players who can’t be bothered to farm up the required legendary materials, such as Seasonal characters.

The secret level is a fully-playable area of the game. There are monsters (cute ones), gold and item drops, health orbs (which look like giant pink cupcakes), random Elites and purple Unique monsters, and even an amazing, baby’s-blanket looking minimap.

Though the area is accessed through Act One, prior to the difficulty scaling introduced in D3 v2, the difficulty of Whimsyshire was equivalent to late Act Four, and players were initially able to use it for end game farming.

This secret level was a popular farming target early in Diablo 3 vanilla, leading the developers to nerf it in terms of rewards. They wanted Whimsyshire to be a fun place to visit once in a while, but not a major farming goal, as Diablo 2’s Secret Cow Level was.

This area was a complete secret during Diablo 3’s development, though fans were not that surprised to see it when it was first found shortly after the Diablo 3 launch, since it was clearly evolved from the Diablo 2 secret cow level + the Diablo 3 “too colorful” art controversy.

It is also possible to get the Whimsyshire layout in a Rift, with normal monsters from elsewhere in the game. They tend to look very odd on the cartoonish rainbow level, if it spawns without a palette-shift.

Patch 2.1 increased access to this secret level with the introduction of rare Rainbow Treasure Goblins who sometimes open up portals to Whimsydale.

To gain access to Whimsyshire in the PC/Mac version requires five special ingredients, and a Plan (AKA Designs or Recipes) to teach the Blacksmith how to craft them into the Staff of Herding. Once players have created a Staff of Herding they must carry it in their inventory to the Cow King’s Ghost, who rises up from a cow skeleton found on the Old Tristram Road, near the pit glowing with a mysterious red light.

After the Cow King’s Ghost conversation, the glow from the pit changes to a rainbow color and it becomes a clickable dungeon entrance. As was the case with the Diablo II Secret Cow Level, characters must have defeated that difficulty level to enter the secret level.

In D3 there were four types of Staff of Herding, corresponding to Normal, Nightmare, Hell, and Inferno difficulty levels. That system was simplified in D3 v2 and currently, there is only one Staff of Herding, with the monsters in Whimsyshire scaling to the player’s level, as do all other monsters in the game.

Patch 2.1 added special ultra-rare Rainbow Goblins, who will sometimes leave a rainbow portal open when they die. Players can use this to enter Whimsydale, even if they have never crafted a Staff of Herding.

Whimsyshire works just the same for the Diablo 3 console, but the materials required to gain entrance are different. Leoric’s Shinbone and the Liquid Rainbow are not found in the console version and are not required to create the Staff of Herding.

Players must assemble the five ingredients and the Staff of Herding plan to enter the level.

Monsters in the secret level drop just like any other monsters in the game. Prior to the difficulty-scaling added in D3v2 (February 2014 with Patch 2.0.1) the monsters in Whimsydale were equivalent to Act Four, making them considerably higher level than any enemies in Act One.

There are a number of special features and visuals in Whimsyshire, most of them clickbles:

There are several special monster types found in Whimsyshire that never appear elsewhere in the game (except randomly and rarely in Rifts). They are appropriately cute and cuddly in appearance, but fight like any other deadly enemy and can be quite dangerous. They also have especially gory and bloody death animations, to contrast humorously with their cute appearance.

All these… horrors can spawn in elite packs. There are a few special unique bosses that can spawn that are similar in function to most other random purple-named monsters in the game.