The Horadric Cube is a needed quest item in Act 2 and 3, as you must put together a number of quest items into a new item in able to finish the acts. The Cube’s functions go well beyond those two quests, though. You can use it over and over, and you will do so. It is useful for storage, as it takes up 2×2 spaces in your inventory, but opens up to 4×3. Most players use this extra space to carry back useful or expensive items to sell.

How to get the Horadric Cube

The Horadric Cube is found in Act Two in the Halls of the Dead, a tomb under the Dry Hills, one of the early surface areas. You want it, so go get it as soon as you have the chance. Once you have it, the fun begins. 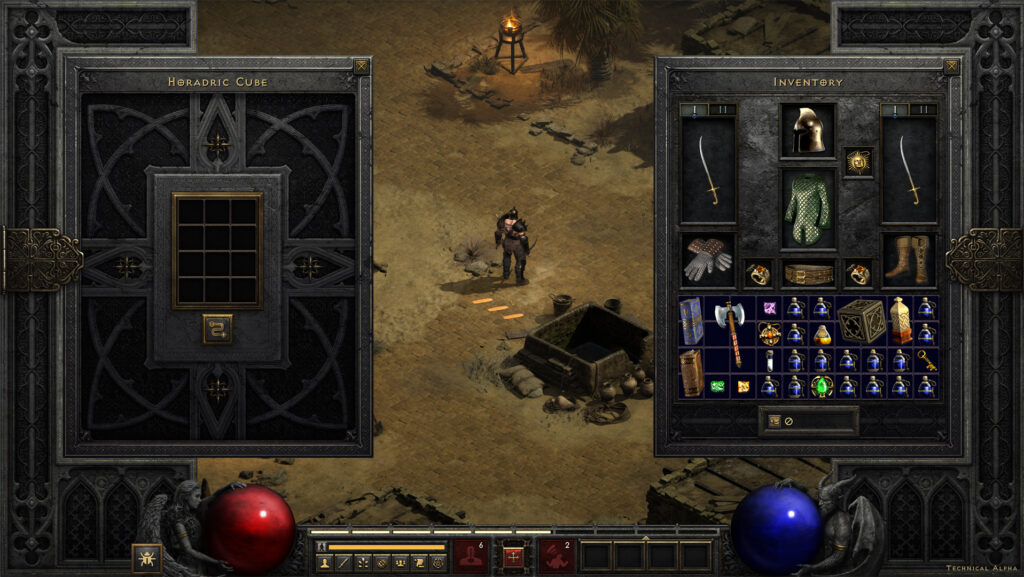 In Act Two you use the Cube to combine the two parts of the Horadric Staff (each part you must find at the bottom of a dungeon) in the Cube, then Transmute them into a whole staff, which is later used to open the way down to the Act boss monster.

But as Cain tells you then, there are other uses to it. His speech at the time reads as follows:

“You have quite a treasure there in that Horadric Cube. According to the Horadric lore, the Cube can restore a Horadric Staff.

To do it – use the Cube as you would a scroll. When the Cube opens, place both pieces of the Staff into it and use the Cube’s transmute power. You’ll be pleased to know that the Cube has other alchemical uses as well…

In Act 3 you will have to find four items, rather than just the two in Act Two. The body parts of the last true priest who battled against the corruption of the Act 3 boss was Khalim. He was murdered and then butchered, with various portions of his body hidden in strongholds across the land.

You must gather them all and then combine them with the Horadric Cube. You need to gather Khalim’s Flail, along with his heart, eye, and brain, and then click the Transmute button, which makes a pretty little graphical effect, and leaves you with just Khalim’s Will, which is slightly altered in appearance. It’s quite a useful weapon, but you can’t use it for long, since you need to destroy it when you smash the Compelling Orb, breaking the spell that has the enemy Zakarum on the surface attacking you. The destruction of Khalim’s Will is also required to open the stairway down to the Durance of Hate, where you must go to finish Act Three.

Aside from the Quest uses, the Cube is a lot of fun to play around with in other ways. There are tons of things you can combine with the cube, taking useless items and turning them into stuff that’s hopefully better for you. Upgrading gems, making rejuvenation potions, adding magical properties to weapons, and more that has yet to be discovered, the Horadric Cube is a very cool toy. More information can be found on the Cube Recipes page.