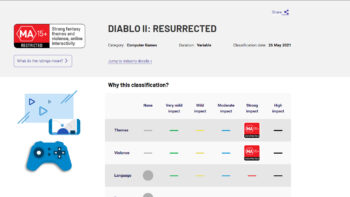 Diablo 2 Resurrected rated in Australian is a headline worth noting as it means we are getting closer to release later this year.

The rating has been awarded this week in Oz and it’s been rated MA 15+. This means that if you’re 15 or over you can slay Diablo and the demons of Sanctuary. It’s a weird rating because if you are under 15 you can still watch, buy or hire a game if accompanied by an adult.

So what does this mean for a final release? Well, it means we are getting closer and we know it’s unlikely to slip into next year as Blizzard stated. It could also mean that a larger beta test is on the horizon.

I’m not entirely sure if a game needs a rating for a beta test but it might be the case in some regions such as Korea. If that is the case, perhaps the next multiplayer test is not too far in the future. Fingers crossed that the next test, which is the multiplayer test, will be with us over the summer.

What is this travesty! Anything below X rated won't do! :D