Diablo III was heavily criticised for its itemisation which was eventually improved with the changes made in the Loot 2.0 update. Players can expect some changes with Diablo 4 items which will be welcomed. However, it’s worth keeping in mind that the item system is likely to change throughout the game’s development and only as we get closer to release will things start to get fully nailed down.

Diablo 4 will introduce instanced loot which means that when loot drops, only you can see your Diablo 4 items. Other players will only see it once you have picked it up and then dropped it.

Diablo players will be familiar with the types of equipable items.

The top tier items are Mythic Items and only one can be equipped with four Legendary powers per item. Legendaries are being designed to offer customised skills beyond the skill system.

Legendary items are coloured orange as they were in Diablo 3. Most characters will end up wearing legendary and other items as they level up. Once a player hits the endgame in Diablo IV, players will be striving for the new Mythic tier of items which are one step up from Legendary.

In Diablo IV, some Legendary items will also be able to modify skills adding more diversity to character builds.

Set items could also hold equivalent power to Legendary items. How your character diversifies will depend on how you use these latter tiers of items with your character build.

Diablo IV will dispense with Ancient Legendaries as highlighted in the Systems Design update. The changes are described as follows and note that they are being replaced by a “new types of consumable item”.

We will be introducing a new type of consumable item (which we haven’t yet named). This item would be earned by killing monsters, just like other items. It would have one random Legendary affix on it, drops only in the late endgame, and can be used to apply that affix to any non-Legendary item.

This means a few things:

There have already been changes made since the BlizzCon reveal to add the following three affixes as an example. These changes were revealed in the Systems Design Update – Part 2 post.

Here are the changes we’re considering:

These new stats can appear as affixes, such as +15 Angelic Power. In addition to providing the above-stated benefit, Blizzard wants these new stats to also act as prerequisites for empowering certain other affixes. If you don’t have enough of a specific power, you can still equip the item, but you may not benefit from an affix linked to that power.

These additions are an example of how Blizzard is fine-tuning the items and affixes so that players have to decide whether a particular item is best suited to your build.

We do know some of the affixes that appeared in the BlizzCon 2019 demo and these are a good indication of what to expect.

Runewords proved highly popular in Diablo II. Runewords were a way for players to combine runes with items to give an item exceptional attributes. In Diablo II there was a total of 78 different runewords that could be used on basic grey items. Blizzard had planned for runewords in Diablo III but the idea was dropped during development at the time citing that “led to a lack of equipment variety”. Blizzard is now bringing them back to Diablo IV. 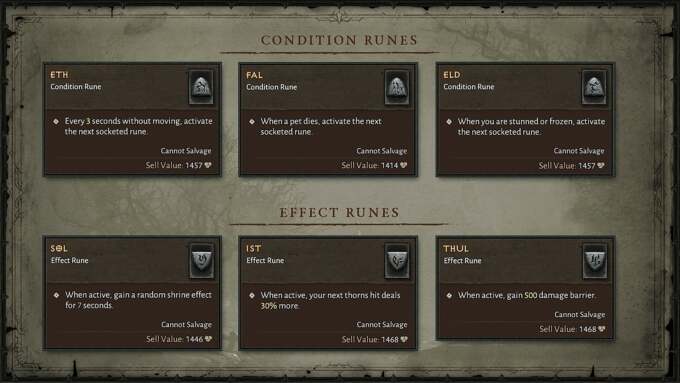 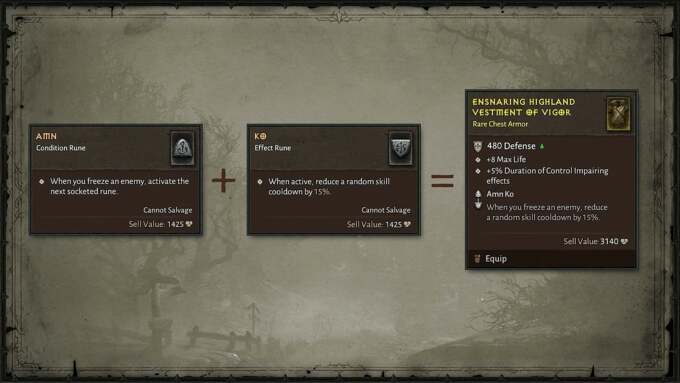 Crafting will once again play its part in Diablo 4 which means collecting crafting materials for creating weapons and upgrades. Materials can be collected by killing enemies, undertaking quests, and inside objects such as chests.

Blizzard has not said much about crafting materials but we do know that they will play an integral part in item trading in Diablo 4.

Mythic items were removed from the development build in December 2020. Prior to their removal, they could contain 4 Legendary affixes