Scosglen is a region in the northern part of the Eastern Continent of Sanctuary.

The climate there is probably cold, judging from how far north it is (like the Barbarian Highlands). The region shares a border with the Dry Steppes to the south. Scosglen is also home to the ancient Druids, and their largest Druid College, Túr Dúlra is located here.

Scosgeln according to the Diablo 4 art team

During the March 2022 quarterly development update, the Art team shared their vision for Scosglen and its coastline.

For the Scosglen coast the Environment Art team set out to tell the story of untamed, wild shorelines and headlands. As you transition toward the shores from inland, the coastal biome is first evidenced by the longer, more directional grasses that react to the driving offshore winds. The beaches are bleak and littered with seaweed, kelp and rotting carcasses. Rugged clifftops ascend high whilst promontories are carved by the continual pounding of waves below. Through the process of creating our biomes, the Environment Art team has set out to communicate that this coastline is rife with peril.

For the main settlements along the coast, it is important to us that they feel woven deep into the fabric of the coastline. Dwellings with deep-rooted foundations skirt the clifftops. In a futile attempt to withstand the harsh elements, these structures are comprised of whatever materials the locals could lay their hands on and are in various forms of disrepair. Stone walls, salvaged wood, and thatch for the roofs. A place of consolation for the brave fishermen that trawl these treacherous seas.

Fishing plays a significant part in the day-to-day life of these weary locals, so we’ve latched on to that idea and placed emphasis on these villages being centered around fishing. By adding supporting elements like rudimentary docks and slipways, it really helps set the stage for the Interactives team to come in and layer on their culture kit throughout the area.

Many of the props here are dynamic. The ships swaying in the ocean waves, the fish mongers’ nets hanging to dry in the marketplace. Our main purpose here is to breathe life into the awesome architecture and terrain work. Our props and culture kits help provide that tangible real-world scale that the Diablo world represents.

The Drowned culture kit here is all interactable or breakable. When we set up these props, we push ourselves in terms of destruction. We use a constraint system to hinge specific pieces together. This allows us to orchestrate distinct, realistic and variable types of destruction.

We do our best to tell the story of what has happened here. The drowned dredging with them hoards from beneath the sea, littering their conquest with relics of long-lost cultures as they raid across the beaches of Sanctuary.

History of Scosglen and the Druids

In the ancient tome of the Druids, the Scéal Fada (“Long Story”), it is written that Bul-Kathos, the great and ancient king of the Barbarian tribes, had a mysterious but trusted confidant, who was only referred to as Fiacla-Géar (“Sharp-Tooth”). This man is sometimes described as Bul-Kathos’s close friend, and at other times, he is referred to as his brother. Whatever the source of their relationship, their bond was strong, and together they shared the secrets of the ancients: of the mysteries below the peaks of Mt. Arreat, of the venerated task put to their people to protect those mysteries, and of the prophecies regarding the dark times ahead. They both agreed that, in order to fulfill their sacred trust, their people must devote themselves to nothing save that charge. However, they disagreed on exactly how the people could best do this. Bul-Kathos believed that only by bringing the tribes together and training them in strict martial discipline could the tribes faithfully concentrate on their goal for generations to come.

Fiacla-Géar, on the other hand, believed that only through obtaining a spiritual oneness with the land they had sworn to protect could the people truly appreciate the importance of their role. Both agreed the other’s philosophy had merit, and so around the time Bul-Kathos united the tribes, Fiacla-Géar gathered together a small group consisting of the tribes’ greatest warrior-poets and shamans and mysteriously retreated into the forests surrounding the area known as Scosglen. There he and his people created the first of the Druid Colleges, huge mortar-less stone towers, covered in vines and safely hidden beneath the leafy canopies of the dense forests. They have dwelt there ever since, forging a new way of life for themselves. They created a new culture and language, cutting themselves off from their Barbarian cousins and their ways, vowing not to return to the Steppes of Mt. Arreat until the time of the Uileloscadh Mór, (“Great Holocaust”) between the men of the world and the demons of the Burning Hells. 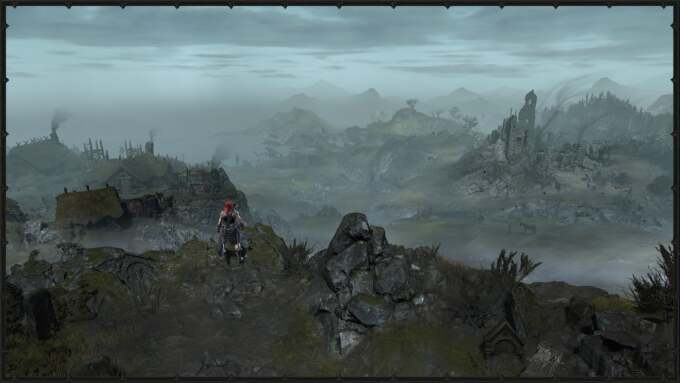 Here, in preparation for the impending conflict, he taught his people the Caoi Dúlra (“Way of Nature”), a harmony with the natural elements of the world, its plants and animals, as the heart of its most intrinsic beliefs, for they are the personification of the very world that the Druids have sworn to protect. Not only was Caoi Dúlra the basis for their system of values, but through its study and practice, the Druids learned to bond with the natural entities of Sanctuary. This bonding was so absolute that eventually they discovered how to talk to the plants and animals, and these beings taught them all the secrets of the natural world. They taught them methods to call animals from far away, how to summon sentient plants from the earth, ways to change their own forms to share the strengths of their animal cousins, even, to a limited extent, techniques to control the weather.

At the Túr Dúlra (“Tower of Nature”), the greatest of the Druid Colleges, stands a great tree Glór-an-Fháidha (“Glory of the Oak”). This tree is the most revered source of the Druids guidance and teachings. Under its branches, for centuries, the Druids of Scosglen have been honing not only their powerful arsenal of natural magic, but also the martial skills they have retained from their Barbarian forefathers. They have done this because they believe themselves to be the world’s last line of defense when the time of the great conflict comes, a time they believe is at hand. Lashing out in fury at the recent insurgence of denizens of the Burning Hells, and at the Leathdhiabhala (“Half-Demons”), demonic corruptions of the very creatures they have vowed to defend, the Druids have, at last, emerged from their forests, marching toward their final stand against the minions of Chaos. – Compiled by Flux

Scosglen is the home region of the Druids.