You are using an out of date browser. It may not display this or other websites correctly.
You should upgrade or use an alternative browser.
J

Nice one for LLD. 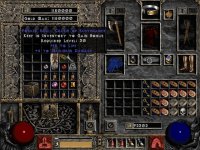 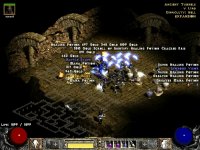 Always worth popping those chests
Reactions: d2lover, John Remedy, Zyr and 11 others

Freezing arrow Assassin would be cool. Lvl req is kinda steep though.. (it's actually lower for an Amazon) 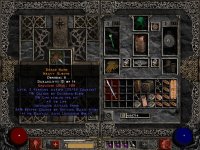 Reactions: d2lover, Zyr, Jocular and 6 others

Out of Sydney, Into California

I was just clearing around Rakanishu and noticed the orange 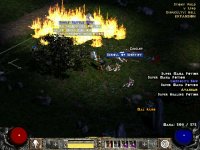 I found this belt. I thought it was pretty cute. No idea on what character i would use it on though.

Could be useful on a Zon using upped Buriza since you need +str and don't need razortail. And resists are always in short supply for a bowzon.

After a brief return to Baal I decided that I would be unable to handle the decreased xp efficiency and so it looks like my 1.11b Hammerdin will be doing the second half of clvl 98 the same way I did the first half: Chaos Sanctuary. The complete failure to find a single unique TC 87 during the two months that it took me to go from clvl 98 to clvl 98.5 had me a bit discouraged about continuing with the Chaos Sanctuary but the xp efficiency was too great to ignore and so I decided ... I'd just hope for a change of item finding luck . That's not much of a 'plan' but hey, it seems to have worked! In the last week I ended my TC 87 dry streak and found some nice goodies around the edges!

First, my third Gul Rune found while leveling through clvl 98: 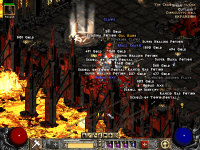 Next I stopped off to bop a random unique monster I spotted along my way. The unique didn't drop anything interesting but one of his comrades most certainly did: 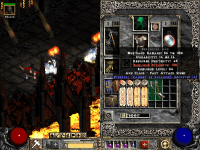 This is only the fourth eth Berserker Axe I've found since my July restart. The first three were without sockets and cubed in order to four, one, and three sockets. So after failing to get usable cube rolls on my last two eth Berserker Axes it was nice to find one that's good to go from the start. Now that I have two four socket eth Berserker Axes I'm really hoping to find/roll a five socket one as I've got a Vex and now three Guls burning a hole in my rune stash. Are there better weapons in which I could make 'Death' ... probably, but I've always had a real Berserker Axe fetish. Why? The name just looks so cool. The graphic has always appealed to me (I can't wait for the matching appearance in my characters hand in D2R). And then there's the scarcity. Berserker Axes are rare, and eth Berserker Axes are really really rare. There's just something so satisfying about finding these. During my last round of SP play (2009-2014) I bypassed the rarity issue and in a single evening went and racked a whole bunch of eth Berserker Axes in 1.07 and then went and made all manner of 1.10+ runewords in them (ATMA haxing included). It was fun for a while but ultimately turned sour ... where's the triumph in beating up on monsters with weapons that were never meant to exist (both the ATMA haxing ... but also the 1.10+ runewords in 1.07 bases). Anyhow, this time around I think I've got things right. When I get around to making an Oath in this Berserker Axe it's stats won't be as good as one made in a 1.07 base but the triumph will feel much greater!

And speaking of Berserker Axes, here's the TC 87 that ended my Chaos Sanctuary dry streak: 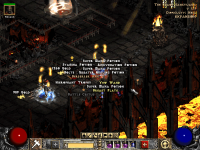 Despite my Berserker Axe fetish, I've never used a Death Cleaver. I suppose it's stats are nice enough, but I can't see a scenario where an eth Oath Berserker Axe wouldn't be better ...

And then there were a few other random items:

And speaking of level requirements, none is nice:

What a surprise to get a rare jewel from Hell Diablo that rolls with four mods that don't have a level requirement! I really like this jewel but can't quite decide what to do with it. My standard twinking plan at clvl 2 is Rixot's and Arctic Furs. Then Biggin's Bonnet and full Hsarus at clvl 3, and switching from Rixot's to a crystal sword with six +4 to Minimum Damage jewels a.s.a.p. None of those items that can be socketed would benefit from lower requirements ... hmm ...
Reactions: d2lover, Zyr, maxicek and 6 others

First Countess kill in NM on p1 with untwinked Assassin ... 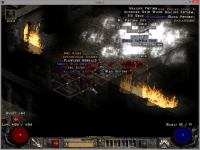 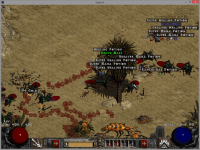 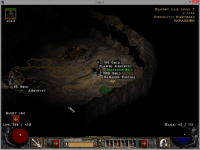 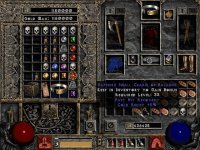 @D2DC, just saw this thread. Congratulations! A Lancer's +3 J&S jav stack would be more meaningful to me than any unique in the game.


I built Toxic_Shaka to wield a rare +2/+2 stack presented by Anya to one of my Passivezons. She was so much fun that I recreated her in a pure-Vitality incarnation as Dexless.
If toxicity doesn't appeal to you, I recently made what's probably the closest I'll ever come to a pure Lightning Javazon (maxed CS, LS, LF, and Decoy). With Titan's, "Spirit," Lancer's gloves, +2 hat and ammy, four skillers, Tgod's, and a 15% LDam Ormus' Robes (Thunderstorm), she has level 40 LF and LS and level 37 CS (before Battle Command). I take great pleasure in doing full clears of the Arcane Sanctuary with her. It's easier for me to insure that all the Specters die over the path with CS than with my Blova Sorc's Nova. No HRs yet, but she has found many good charms and brings home LOTS of gems for charm-cubing.
Reactions: PhineasB and D2DC

@Zyr - Yeah, my LF Zon has already retired, but I think those are deserving of another build (or three). Others have suggested using CS for Baal runs or Chaos Sanctuary clears. Poison Zon will surely be next on the to-do list!
J

Print it out and hang it up on your refrigerator.
Reactions: maxicek, D2DC and Swamigoon 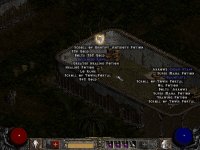 What do you do with a 1.07 Lo? Is there anything besides try for another and make beta bramble?

jimsfriend said:
What do you do with a 1.07 Lo? Is there anything besides try for another and make beta bramble?
Click to expand...

Code:
I think I prefer the Beta Bramble route though.
Reactions: art_vandelay, Skezla and Jocular

Sure it doesn't look like much at first but wait there's more! That's right, a hidden seventh mod! 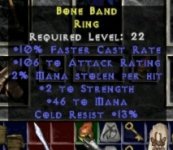 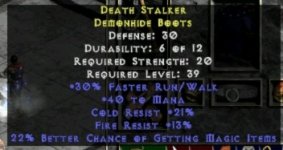 And after watching this very interesting video about Zeal Enchantress, I decided to try rolling a few Passion Phase Blades. Got this on my first try: 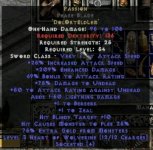 Seems like I don't have a choice in the matter, D2 is telling me it's time to make a Zeal sorc!
Reactions: d2lover, PhineasB, D2DC and 2 others

RoF was generous this morning. 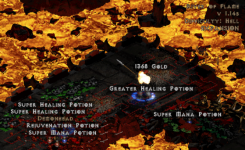 Out of Sydney, Into California

Genuinely one of the best 3OS Druid Helms I've seen... That being said, my knowledge of Druidy things is fairly limited - what do you fine folks think?

P§ÝÇHÕ said:
Genuinely one of the best 3OS Druid Helms I've seen... That being said, my knowledge of Druidy things is fairly limited - what do you fine folks think?
Click to expand...

It is quite nice, but Jalal's has +4Shapeshift and a mountain of nice mods. Plus, for better or worse shapeshift ias breakpoints are only minorly affected by off-weapon IAS, so this helm wouldn't be the best candidate for IAS/RES or IAS/ED% jewels.
You must log in or register to reply here.
Share:
Facebook Twitter Reddit Pinterest Tumblr WhatsApp Email Share Link
Remove ads & support the site - Get PurePremium
Top Bottom