Do you use Anya's reward to personalize an item?
I am trying to complete characters from all perspectives and it bugs me that this quest is unfinished in nearly all of my toons.

I could simply start personalizing random stuff but then again I am not quite sure how this would affect it's trade value.

I thought about personalizing runeword bases, but only if they have %edmg

If I ever find something like... super amazing, then yeah, I'd personalize that item. I'd even make a character named Kinkara so the personalization is perfect. Otherwise I don't see the point, really.

It'd be interesting to find an item you traded in bnet, for example. Then the personalization starts to make sense a little.
Reactions: Excalibur

I do, on all completed characters since completion to me means all quests and wps (minus Halls of Pain).

Items that I personalize though, tend to be common and something I know the character won't swap out of.

Canvass through all my characters and you can find tons of personalized LoHs, Gfaces, Razortails etc.
Reactions: Swamigoon, Excalibur and Luhkoh

I tend to skip personalizing to keep pindle in H and forget about the rest of the quest in previous difficulties altogether. Anya shop without the red portal in front of it feels wrong.

Out of curiosity, does anyone happen to know the item description character limits? It would be interesting challenge to create the most mouthful item
Reactions: Excalibur
M

I always personalize once I've found an item that is good enough and characteristic enough for the character (like a sorceress' Frostburn or a snipers Buriza-Do Kyanon). 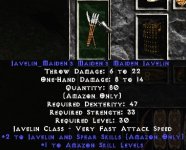 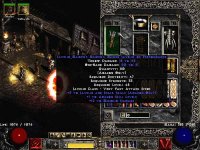 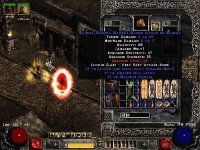 hmm... question is, you created the characters before or after finding those javelins

I don't personalize anything for aesthetic reasons. Adding the character's name to the item name makes that top line way too long.
Reactions: maxicek and Luhkoh

For those who trade, would it be a reason not to trade such an item even if you were badly needing it?

@Excalibur For me I would be unlikely to trade for a personalised item. Not out of the question, but it definitely makes it less interesting.

I have personalised a few things, but not many. I think all were 2h swords from my septs.
Reactions: Excalibur

Excalibur said:
For those who trade, would it be a reason not to trade such an item even if you were badly needing it?
Click to expand...

If I had two offers of identical items, one personalized and one that wasn't, I would always choose the non-personalized item.

I personalized in 2019 for the MFO team, rushing a character with the team name, and gave personalized trophies (Bloodletters' swords) to team members

I would do so again this year probably ;-)

I personalized most of my Set character items:

So, considering this is quite a weak reward, it becomes even more useless when used.

I think this quest needs some kind of a project / Tournament.
If only someone could suggest and host something interesting!

On the trading thing, I typically would devalue an item personalized, unless it was so awesome I just didn't care (a perfect runeword roll, or !!JACKPOT!!-tier rare/craft spring to mind) or if the personalization was in fact what I was after... an old MFO trophy, or something from a char I thought was awesome... Gripphon's Griffin's Eye & WoRG's Wolfhowl spring directly to mind for the former, AnnaGoAnna's Cracked Sash being the ultimate for the latter. I have some odd collection's, to be sure...


On the old forum, quite some time ago, there was just such a tourney, with the simple goal of being the best joke, as voted by the rest of the SPF via a poll... unfortunately the squid ate it before I even joined and I only know it through a "Remember that tourney?" thread. I would have loved to have seen the entire thread, but there were several forumites who posted screenies of thier entry, including the two winning items (also unfortunately, I did save them, but that HD burned out couple years back, and they were low priority for recovery...)

Michael Jackson's the Face of Horror


Hmm... that second one may not have aged as well, but still hilarious, imo.
Reactions: Excalibur and maxicek

Not gonna lie, this had me
Reactions: maxicek and zemaj

TopHatCat64 said:
Not gonna lie, this had me
Click to expand...

The 'survivors' I saw were all pretty good... actually, do you remember that, THC? I was trying to think of who else that's still around had been there before me, and @Helvete and @maxicek were the only two I could say for 100% predated my own membership, but now that I think of it, you could fit in that group as well.

The 'survivors' I saw were all pretty good... actually, do you remember that, THC? I was trying to think of who else that's still around had been there before me, and @Helvete and @maxicek were the only two I could say for 100% predated my own membership, but now that I think of it, you could fit in that group as well.
Click to expand...

I vaguely remember the tournament, but not the actual entries. I was active on the diabloii.net forums before Diablo 2 even officially launched back in 2000, but my first post in the SPF wasn't until 2008. I had started playing SP with my brother a little after I graduated college, and I gravitated towards the legit play and the SPF's welcoming embrace to all the weird and wonderful things you can do in D2.
Reactions: zemaj
You must log in or register to reply here.
Share:
Facebook Twitter Reddit Pinterest Tumblr WhatsApp Email Share Link
Remove ads & support the site - Get PurePremium
Top Bottom