Bobo spawned for the first time sometime around November of 2019. Having only the most basic and mundane battling equipment and no memory of how he got there, Bobo started his journey from the Rogue Encampment to his city of origin, Harrogath. Through many adverse situations he persevered finally reaching his destination, where he learnt what his destiny was: to reach the highest status any mortal can wish for, that of a Hero; which he did today, on the 13th of December. 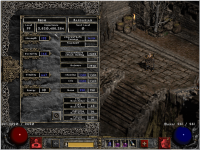 Through sheer willpower and perseverance he made his way to fame and is now waiting for Harrogath's officials to decide if he decerves a place as the 4th Ancient guarding the Arreat Summit. We'll see if that ever happens as we all know how tedious bureaucracy can be

On a serious note, I really don't remember in detail how the journey developed but, long story short: I kind of used speedrun strats untill Hell LK (lvl 80-ish) and there I farmed almost every rune I needed and then from there I respec'd to WW and started running Mephisto for the rest of the gear I'd need to kill Baal and his minions over and over again. By the time I reached Baal I was already lvl 90 from all the Mephisto/Council/Andariel/Others kills and the only thing left to do was to start the real grind. By the time I reached lvl98 I had hoped I'd drop a Ber rune to roll a Beast, respec to Conc and start Nihlarunning, but that didn't happen so I went back to LK to farm some more. The Nihla thing doesn't need much of a description, but I had never done it before, so I had at least that going for me haha.
Extra info I have been remembering: In the 8 levels I spent visiting Baal I died 5 or 6 times, once per level for the first 5 or 6 levels and during the Nihla grind I died only once, about two ticks into the level and I didn't recover my body. Thankfully that never happened again. Also between those two visits to LK I had to do during this project I spent over a month just opening chests, which led me to find the gear you'll see below.

Acknowledgments: I want to convey my gratitude to everyone who followed this little project, specialy @Luhkoh , @Bewitch , @ResTTe and Glenn who inspired me to join the SPF and also some people outside the forums who also gave me lots of support like hellojoe, unsullied13 and Jymnasium. Love you all!

I don't want to make this any longer. If I think of anything else I'll edit this opening post.

Thank you very much for reading!!!

I will repeat the congrats here . . . Congrats! That time in LK paid off: quite a charm collection on Bobo! I was wondering how his vita is so high, but then got to the readouts and was, like, oh. Quite the feat, and I'll just say it, definitely time to start the necro
Reactions: Kinkara

@PhineasB Thank you! And I forgot to add it, but I spent a month in LK until I dropped that last Sur for Enigma, so that netted me a considerable ammount of nice charms haha

@saracen85 Thank you! The drops look impressive now that they're compiled alltogether, but they sure don't feel that amazing considering all the hours I put in haha although they might be above average, I really don't know
Reactions: PhineasB

Hi, how many PGems did you collect?

On what did you spend your socket quests and how did you farm a 5s Phaseblade?

@d2lover The grief bases I farmed them in the Cow lvl on /p1 with two oaths (one in an axe and one in a sword lol)
The quests were used for Ruby Jewel of Fervor in a Reaper's and a Cham in a Guilliame's for the merc. The GFace wasn't really used since I decided that Kira's was much better for Baal runs. I still have one socket quest left to use.
O

Congrats on the end of the long grind!
Reactions: Kinkara

Would you next time save the ancient quest for 98?
Reactions: Kinkara

Of course there were mass vipers on what should have been the last run, congrats

@Ohomemgrande Thank you very much! I knew it was gonna be long from the start, but I never expected it to be that long. I took a lot of breaks as well, specially during the last lvl.

@d2lover For some reason I don't think running CS with WW Barb is a goos idea. I feel I'd encounter difficult situations more often than what I did with Baal and that alone would have made the leveling process much harder since it was really difficult to stack resistaces on this guy. And also it was my first time doing something like this so I just wanted to go for the most secure strat. But if it ended up being viable to do seal runs or something, it'd have been really nice to have the Ancients quest ready for those last 40mil exp

@Albatross Thank you Lookign back at the video I don't think they would have been able to kill me, but since I don't record any gameplay ever, I wasn't about to start by recording a death in the supposed last run... better safe than sorry, as they say. Also the 8% leech I had on the ring saved many many runs for me taking me back to full life in 2 or 3 hits so I usually felt comfortable dealing with vipers most of the time.

Here is the Reaper's drop... Reaper's and a little bonus double drop haha (one if the best drops I've had, if I'm being honest): 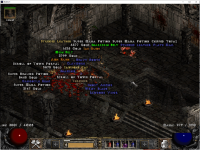 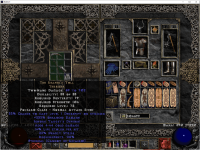 Congrats! Great job and nice video. Next one when?
Reactions: Kinkara

The long awaited day has come! You are now a man Kinkara ^^
Huge congrants on finishing this project and on the drops you got! That reaper's is sweet and that 40/15 was well-spent imo. I like that 2 shrine setup you got at nihla and how you were executing it.
Also that 5,2k life after putting the last points into vita, so satisfying XD
Reactions: Swamigoon, Luhkoh and Kinkara

@Pb_pal Thanks I don't know when the next one will be!!! I need to seriously think how much I want to do this again XD

@ResTTe Yeeesss!!! And it was an extra long wait for those like yourself who were there from the start haha! There was a third shrine a little bit out of the way so I had to teleport a bit to the left and then straight to the entrance of HoV if I wanted to check it. I was checking all three shrines but I stopped for the last 2-3% of the level because I didn't care any more haha, but that also meant I was still not really used to the simpler route. You can see it in the second run of the video where my mouse just goes all over the place and I got lost for a second.
Reactions: ResTTe

Congratulations. Just over a year for the journey is very impressive.
Reactions: Kinkara

@Luhkoh I am, aren't I? Now I have to figure out how to make this thread look nice in my signature "Oh, signature expert, Luhkoh" *bows*

@maxicek I feel it was pretty sloppy, but I had a good team of advisors helping me from behind the scenes haha. They made it easy for me
Reactions: ResTTe, Luhkoh and maxicek

Still waiting for that nice signature . Also I remember you mentioning AT barb simulator, and I said talk to me when you get 99... Ummm... need a new excuse...

@Luhkoh I was just thinking about that. I respec'd following some posts from @ffs in the Finding the Balance Tournament and made some gear choices. I'm just learning to play the char and the skill rotation is a little annoying, but it's so much fun I think I can master him. It'd be very interesting to find the best way to distribute the skills for this build. I definitelly want to discuss this with you.