You are using an out of date browser. It may not display this or other websites correctly.
You should upgrade or use an alternative browser.
F

We've all been at that crossroads and it's a bit of a gamble either way. Do you have an Infinity base yet, and what S&Us are you missing?

If you have most S&Us you can skip Meph, otherwise that's what I'd do next. Personally I always ran him at least until I had Shako, Arach, Andy's.

When missing a base on top of Infinity runes, I'd also consider Cows as there's a good chance you'll find both within a reasonable time frame. Assassin with DS/FB build is one of the best builds for it, too. In case you get the runes before the base, you can also roll maps and check Act 3 areas for elite polearm racks. It can take a few hours to roll the map but once you have a rack it's basically done. That's what I did on my Sorc.

The bigger gamble is to run the Pit, the advantage over cows being XP gain and a decent shot at some more S&Us. Here you could get everything you need, or you could run 50+ hours and come up empty handed on all fronts.
Reactions: Pb_pal and PhineasB
F

Thanks to both of you, @WoRG and @Pb_pal - I'm glad to see that I wasn't just imagining things! Your points about the spawn locations are well taken. That map I was referencing was decent in terms of dual campfires, but it could have been better (the campfires were adjacent, but not next to the waypoint). I could have lived with it if it was more "comfortable" in terms of monster density (as @Pb_pal put it so aptly), but that was not the case in this instance as I was regularly getting multiple monster pack spawns between the two campfires (probably averaging two per run, with many hitting 3-4 packs per run). To make matters worse, those spawns felt like they were frequently apes that were getting Might auras and Extra Fast. Running a hardcore Amazon that has no crowd control skills like Howl or Terror, and is charm-poor as well as item-poor, made for frequent runs that looked like the closing credits of a Benny Hill episode.

And I can also confirm the impression of LK huts. I’ve definitely noticed some maps with much greater spawn frequency in one or more hit. Some maps have none and I’ve commented on how much safer some maps are across my 99er updates. Even without scientific testing, I feel very comfortable saying it’s a thing enough to support rerolling a map myself if as described by @Foghorn Leghorn
Click to expand...

Thanks, @PhineasB . I felt the same way last night, that it was a thing enough to support rerolling, so I spent about an hour rerolling and testing maps. I finally landed on a map that is much safer - sure, it still has boss packs now and then, but not with nearly the same frequency as the previous map - and the layout is much more efficient as well, both in terms of location and in terms of general flow and run path. Now I just need to work on my RNG luck....

I really appreciate the insights, lads. Thanks a bunch! And fantastic jobs by both @Pb_pal and @PhineasB as they close in on 99!!!
Reactions: Pb_pal and PhineasB

@ffs Everything I still need I can get from Meph. Ideal gear would be Stormlash too, but I think that is too rare to bother targeting. The Astreons I found in the BtF tournament is quite nice anyway, with 33% CB and 25% slow. Andariel could also be a target too for some items.

I have a 4os Eth Thresher waiting, I had a semi stable rack on the first LK map I ran.

I think I will stay in LK for a bit, as Infinity will make all the other runs much easier. If I get too frustrated I will change and re-roll the map. Hopefully the worst is behind me and it won't be 9000 runs for the runes I need....

Quick update on Fiona, who is doing LK at players 7 and is in a similar spot as maxicek.

The most likely approach will be to continue running LK until I can make my first ever Infinity. Then doing Baal and hoping for Enigma runes along the way.

Last but not least the best find today was Fionas first skiller. Very happy about that! 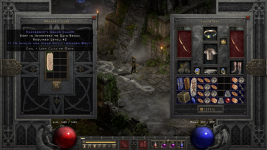 This has been going on for years, but just wanted to say that running LK for Enigma, with a non-teleporting character, that's just mental.
Reactions: Pb_pal, Grisu, Irenicus and 1 other person

nepeta said:
This has been going on for years, but just wanted to say that running LK for Enigma, with a non-teleporting character, that's just mental.
Click to expand...

I find running LK for Enigma with a teleporting character to be even more mental...

maxicek said:
Time for an update.

Balancing the Finds Pindle runs took me up to level 89. I'm now at just under 11000 LK runs, but the good news is I finally have Enigma and Fortitude done. I still need 2x Ber for Infinity and I would really like to get a +6 CtA still.

So I am at a bit of a crossroads. I could take a break from LK and start running for Keys and Meph / The Pit for the other items I need and hope for a lucky rune drop. Or I could stay on my current path and keep my nice LK map and run (or rather finally tele) for more runes.

@Nona The plan is to do something like ths:

Meet the Olympians threads are for showing off your character from the corresponding MFO. You can include whatever details you want; it's a chance to brag on your runner or just to show them off. 2021 Summer MFO sign up and progress thread is here, and the results thread is here. (Sorry for...

Obvious the Stormlash is not going to be easy to find, I'm planning on using Astreon's at the moment.

I will probably use at least three builds though.
- 20 DT for levelling
- A 20 Fade 20 DT build for Ubers
- This build for Baaling.
Reactions: PhineasB

PS: I am actually not sure, if the JMOD will be usefull for an untwinked Java. Any input on that? So far I have only one lightning Facet (I believe 3/5) and multiple plain 15 IAS jewels.
Reactions: Jpy

maxicek said:
@Nona The plan is to do something like ths:

Meet the Olympians threads are for showing off your character from the corresponding MFO. You can include whatever details you want; it's a chance to brag on your runner or just to show them off. 2021 Summer MFO sign up and progress thread is here, and the results thread is here. (Sorry for...

Obvious the Stormlash is not going to be easy to find, I'm planning on using Astreon's at the moment.

I will probably use at least three builds though.
- 20 DT for levelling
- A 20 Fade 20 DT build for Ubers
- This build for Baaling.
Click to expand...

Great, thanks for insights…is it possible to save the ancients with this character and run other areas or is baaling really the best route?

Based on my experience running multiple twinked Assassins to 95, Baal runs are very safe and easy. After level 90 much quicker than alvl85, if you have the right gear.

So my plan is to take my time gearing up, to make the final push easier. This may not be the most efficient way of doing it, but I'm not really bothered about that.

Assassins can level in The Pit to about 95, but that is much slower than Baal. CS I never found pleasant to run with a trapper, even with Infinity. Without any -ELR for traps, LIs are still hard to kill.

So I don't think there is really any point in saving the Ancients. Kill them whenever you are ready
Reactions: Irenicus and Pb_pal

Next quick update after 1500 LK runs.

Notable finds in the last 500 runs were Um, Vex, Fire-Skiller and a Shako. Overall this was the worst stretch so far. Hopefully the big runes will start dropping soon.

Ran from 90-92 in Pits, still no 5 os Ethereal weapon. Going to run LK until I get a rack now that spawns them. Hit one around 90, but it wouldnt spawn again even after 15 runs. Hopefully I'll find one that sticks by casting BOS before hit a rack. 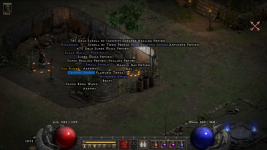 First one in D2R!

Well….I never officially added my character to the list, I was going to wait until guardian when it got down to crunch time, but I deeded her yesterday :-(. Like most deeds it was a careless mistake. I think I was level 74. Lost some nice gear but nothing I won’t find again except for a “unique” (triple durability) circlet that was 30% run/walk, 4%ML, and 30+ resist to fire and lightning I got of NM mephy. I loved that thing. I really hadn’t quested an assassin before and they are so fun to play! When I got back to my other character I was like why are you so slow??! I’ll probably start another one eventually but switched my attention to a sorc I’ve been meaning to guardian as it was a little painful to think about starting over. Good luck everyone!
Reactions: Foghorn Leghorn, maxicek and PhineasB

So I started another assassin up, I just find her so much fun to play and liked the untwinked aspect. I'll try to be safer this time. About two minutes in and the game was telling me to rethink my decision... 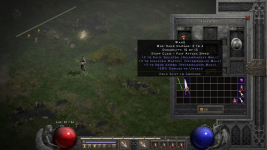 Doesn't get much better for an untwinked skellymancer...but alas we are going forward with Nona reincarnated . I'll wait to add her to the tables until she gets a little closer to 99 than single-digit levels....
Reactions: Freuga, ulof, Swamigoon and 5 others
Y

Hopefully this works properly, if someone can tell me what E/S & S/U mean that would be amazing.

I've been playing Diablo 2 for a long time, currently I stream most of my play on this Sin! ggDispo96 if you want to follow, I'm good at chatting but bad at talking about gameplay haha.

I tried to get through hell dozens, maybe even hundreds of other times, have lots of threads on the old forum (same username I believe), even had people tell me I should quit but I never did! And now here we are.

It was a wild ride and now I'm starting to hit my stride and really having fun, currently farming LK/Pindle/E&S/Pits, trying to grind runes for infinity (found a sur) and shako/hoto/travs/cta ect haha, only playing P1 still, clear fast but until I have more life or more damage I don't feel good moving to P3+, I do switch to P8 for LK however.

Of course I am very happy with the results and "only" a Ber away from my first ever Infinity. I am pretty sure, that I will leave LK after making that and not go for Enigma + Infinity. Doing LK almost exclusively is quite a challange.

Happy running everyone!
Reactions: Freuga, ulof, Jpy and 1 other person

@Nona that's an absolutely amazing wand! It's a shame wands can only get 1 socket... a White runeword in that would have been truly beautiful