Making a blue-themed Paladin w/o it? Blasphemy!

I think you should have to park him after finishing NM, and make him wait on the armor he was destined to wear!

That may give me a chance of finishing Pando project before you..
Reactions: PhineasB and Pb_pal

@Pb_pal said he was using items colored lblu and cblu for Blue...Tyreal's is dblu, so it would have to wait for Indigo

LoL, while looking through the uniques file for coloring, I noticed the property 'hit blinds target' is internally labeled as 'stupidity'

WoRG said:
@Pb_palTyreal's is dblu, so it would have to wait for Indigo
Click to expand...

As long as one of his chars has to wait on Tyreals. Thats what is important! XD
Reactions: Pb_pal

That's a lot of ground to cover, especially at 3x the characters!
Reactions: Pb_pal and D2DC

WoRG said:
LoL, while looking through the uniques file for coloring, I noticed the property 'hit blinds target' is internally labeled as 'stupidity'
Click to expand...

@D2DC - Tell you what, if I finish Indigo before I find a Tyrael's, I'll remake her again once I do find one. You can consider the sept technically incomplete until then.
Reactions: D2DC

@Pb_pal do you mind if I add in color themed chars to this thread? You may be done before I get around to them tho.. XD

The more the merrier, go for it!

Also I should mention that I've been thinking about it, and it doesn't feel right to leave the other transform colours out of it simply because we don't define them in the rainbow. Once I'm done with the original 7 characters, I'll be adding in White, Black, Grey and Gold to the mix as well.

That should give you a little bit of extra time to catch up, too.
Reactions: PhineasB, CaseyJones, Vildecor and 1 other person

I was planning on some "beyond the rainbow" colors as well. Interested in seeing what you come up with!
Reactions: Pb_pal

Hmm, I wonder how you could theme characters for infrared, ultraviolet, etc. Not visible to the naked eye, so probably wouldn't follow the color-effects on the gear you have demonstrated so far. Perhaps the invisible light spectrum categories could inspire a theme build around ethereal items. (Or has that been done before?)
Reactions: Pb_pal and D2DC

White may be hard... very few white prefixes on armor (Visionary & Faithful), and no white suffixes (well, the non-enabled 'of Teleport Shield' (think Occy))...I think the only white boots are Sigon's or a 'Faithful' boot with no coloring suffix... You may end up wearing a lot of Sigon's/Mavina's set armor peices (most white or bright white uniques are weapons)

Tried them around. It/Mavina's are a bit shinier on Sorc/Pally, and they look a bit whiter than other classes. On a Sin, they just look grey.
Reactions: Pb_pal

Yeah the displaying thing is kind of a pain. Barbs are really poor just in general for displaying colours, but that's the way it is. As WoRG said, I think I'll likely end up as a Sigons/Mavs character for that one, but that's fine too since those are very serviceable for a playthrough.

I'm sure a few inventory slots here and there will end up empty on some chars, but they will mostly be rings/amulets if I'm too lazy to gamble for the right affixes. As long as they are on non-displaying slots, I don't mind too much.

Procrastinating the RFL is a helluva thing. Blue is now through NM.

Smooth sailing into Act 1, he hit level 45 in the Underground Passage and finally completed a full gear set by equipping dual Ravenfrosts. That CBF sure is nice! I also took this chance to kit him out in a full set of skillers, which ensures everything melted basically instantly.

Andy soon fell, a Might merc was hired, and basically nothing eventful transpired through to Duriel. The destruction continued through the jungles (jeez this guy is overpowered at this stage!) and Meph joined his siblings easily at level 61 (the ring was Manald Heal, btw). In Act 4 things started finally happening again gear-wise as he got Laying of Hands once he hit 63, maxed out Salvation to finish off HF synergies, and will now start pumping Zeal.

The Forge was a Fal, and he hit 65 while clearing seals, allowing him to equip the Credendum belt, and go on to kill Diablo with ease. 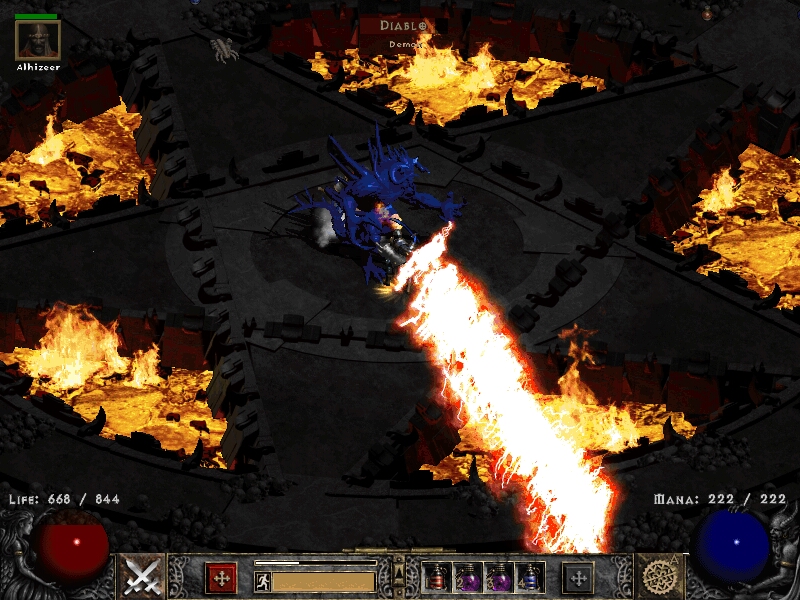 Act 5 had some more significant gear upgrades. He ran Eldritch until 67 to get Nightwings, finally replacing his chipped-sapphire hel from a1 normal. Then it was quickly through to Frozenstein, who the merc handled well since he's CI. Anya was saved, Nihlathak killed, and the Ancients absolutely obliterated as the duo pushed through the WSK where Blue hit level 70 and got his final gear upgrade. 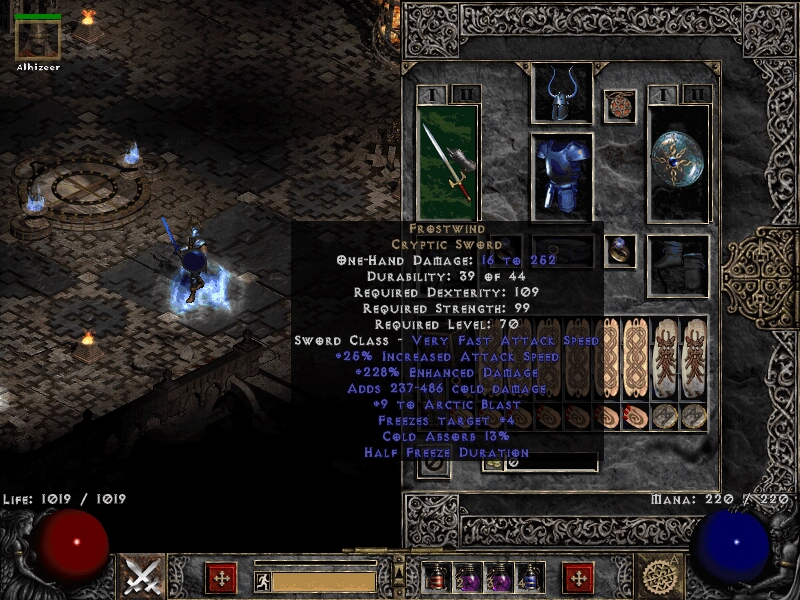 That looks AWESOME! I took this chance to deck out the merc in Infinity/CoH/Crown of Thieves(which will be swapped to Delerium once he has enough dex). The rest of the act flew, and Baal fell with Blue just shy of 72. 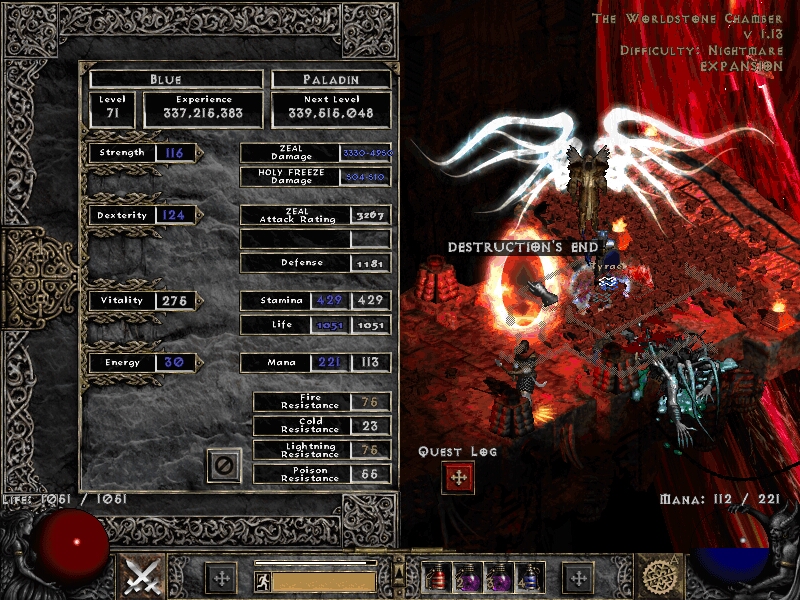 Man, Nightmare was quick with him. He's extremely powerful, and very safe so far too. I know that will change a bit in Hell but it felt good to just cruise right through an entire difficulty.

You just dont see themes this good. Perhaps once in a blue moon..
Reactions: Swamigoon, Vildecor and Pb_pal

I thought about leveling a bit before Hell but Blue is so powerful that in the end I really didn't see the need. One final respec and some charm juggling to get him to his final state: 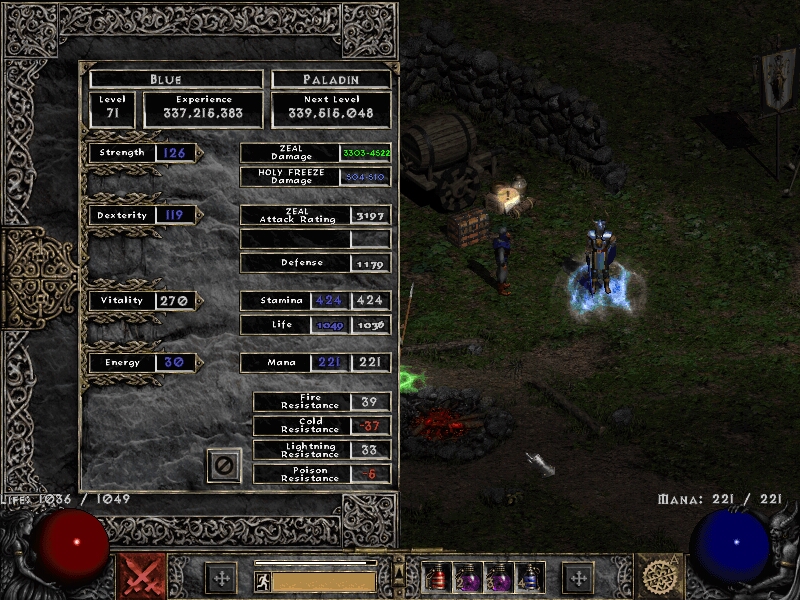 Nice. /p5 for now as I don't want to be waiting too long for the merc to kill any unbreakable CIs, and Blue is a touch fragile so I feel it's a good balance. So far so good as he easily cleared the Den, Blood Raven, and Tristram before encountering his first PICI boss he had to park. He quickly went on and killed the Countess, and then found Pluckeye for Grail-8, as well as my 2nd to last TC3 that I need (Knell Sriker remains). Things are safe enough right now but LE and FE monsters are starting to hurt, so he socketed his Nightwings with a Ral, popped an Ort in his armour, and a PDiamond in his shield. 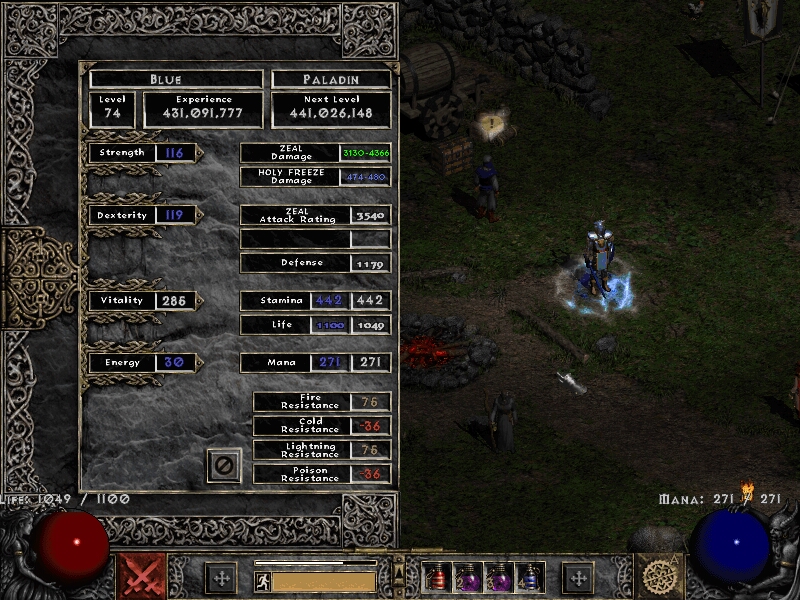 Much better (well, aside from Cold and Poison)! Quickly through now to the Malus, and then Andariel with no trouble at level 75.

Act 2 was extremely uneventful, the duo just steamrolled their way through with the merc taking CIs and Blue handling any PIs such as the ghosts. The Staff and Amulet were retrieved without incident, and the oversized insect was slain handily as well. More of the same in Act 3 through the Spider Jungle, but they got slowed down a bit in the Flayer Jungle due to all the CI flayers. The merc once again came to the rescue, and it was through to the Council before the duo just basically waltzed right up to Mephisto and killed him. Man, this guy is strong!

Fortunate monster rolls (no CI Spawners!) meant Blue absolutely tore through Act 4, reaching the Hellforge (Io) and the CS in record time. The CS itself was of course another issue since OKs are CI, and just a pain in general. Slow but sure the duo pushed through, cleared the Seals and then fought Diablo. 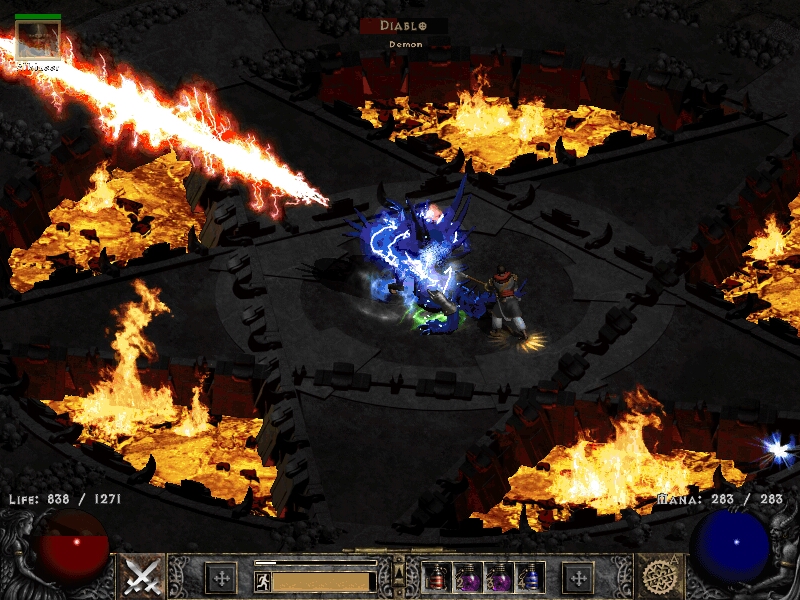 He basically only used the hose, so Blue and his merc just stood there and pummelled him. Easy enough.

Act 5 started out in the same vein, and other than having to dance around archers , progress is smooth. The power is still very real with Blue, so Shenk died quickly, Anya was rescued (without any CI problems down there, somehow!), and Nihl was (a little bit more carefully) disposed of. This is where things ground to a halt.

The Ancients were taken on /p1 for simplicity's sake. Lots and lots of running around and dodging, Blue used all his health potions before he had a chance to properly engage the trio. Madawc was separated first, and fell without too much hassle. Blue dodged Leap attacks while the merc whittled a CI Korlic, and Talic was easy enough after that (Blue just stayed out of the way). Back up to /p5 on to the WSK.

For once, the WSK proved to be the actual toughest area of the game. Level 1 was absolutely filled with CI, amp-casting Witches as well as CI Invaders so it was slow and treacherous going.

WSK2 was tricky as well, but for different reasons. Poison mages were a real nuisance, since with -26 PR the drained Blue's health bulb FAST. Normally that would be fine, but bats and Frenzied Ice Spawn were the other two rolls, and they are very quick. That can make things tricky when your health is regularly plummeting below half. They were easy enough to kill, but it felt like Blue could die at any moment. WSK was the opposite, and over in a flash.

Then, the Throne. Gloams, CI Oblivion Kinghts, and Frenzytaurs...great. COnfuse from the merc's Delerium played a huge role, and eventually it was cleared. After that, the first 4 waves basically melted. Lister's pack was Extra Fast and we got pushed right back out of the main chamber. Blue popped a TP and ran back from the WP to separate the pack. Oddly enough, Lister was the only one who chased us (and not CI!) so we got rid of him first and then dealt with the rest of the pack.

Baal was a dream on /p3. Holy Freeze kept him slowed enough to keep his attacks inert, so it was only a matter of time until Blue became Patriarch at level 84. 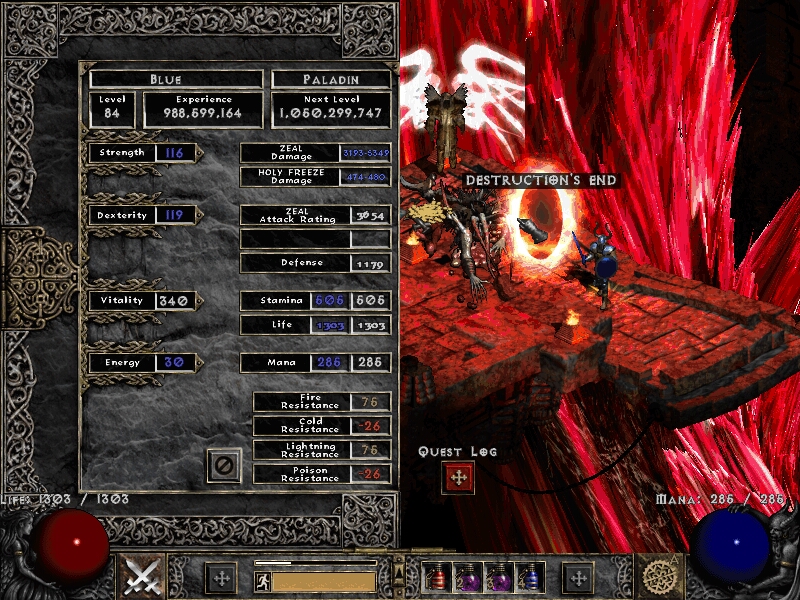 All in all a super fun character, and a really fast trip (at least for me) through all 3 difficulties.

Pat thread with some thoughts on the character is posted here.
Last edited: May 28, 2020
Reactions: Vildecor, ffs, D2DC and 2 others

Where can I start the appeals process? This character is clearly not "finished" until he dons THE blue armor!! XD
Reactions: Babyhell

D2DC said:
Where can I start the appeals process? This character is clearly not "finished" until he dons THE blue armor!! XD
Click to expand...

You're forgetting that THE blue armour is dark blue and therefore doesn't apply to this character. Your appeal is thrown out.
Reactions: ffs, Babyhell and D2DC

@Pb_pal i bet you're gonna find a dark blue build...