Nice write up @Pb_pal I hope you can find improved mods on a helm, but the character looks awesome in that last screenshot. Looking forward the journey through Hell!
Reactions: Pb_pal

I've been delayed on posting this writeup for a while due to MFO prep and the fact that I was unable to upload screenshots to imgur for some reason. Back in uploading action now, so Red has officially concluded her journey!

I spent way longer than I would have liked leveling Red up to 76, but in the end it's well worth it for Medusa's Gaze. A couple more gear upgrades as well in Dracul's Grasp, and Um in her helm to cover some resists, and I gave her some very unimpressive jewelery to cover a few deficiencies (resists, life, mana leech). One last charm swap to fill some more gaps, and here we are. 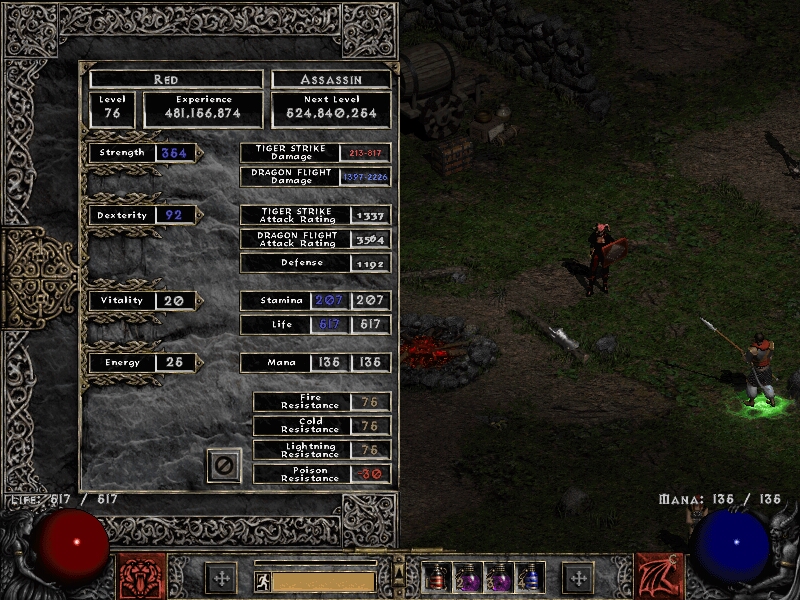 Also popped Infinity on the merc (hence the need for ML now). This is both since DTail is now the skill of choice, and also for AR help. Okay, off into Hell! Starting out on /p3, but we'll see how long that lasts with her titan fragility. Also, despite a very good suggestion of DS by @Swamigoon, I'm going to hold off on it. Partly because it doesn't feel quite right with a MA build, and partly because my memory is apparently so bad that I forgot all about it. Woops!

The skill point from the Den maxed out DFlight, so remaining points will go into.... CoS, I guess? Blood Raven down, and through to Cain, she met her first tricky PI in the Black Marsh. She made it work pretty easily though by pinning him with kicks and whittling him with CB/OW. Progress is good so far, the killing is not the problem at all but she has to be careful around groups since she's fragile as all get out (to be expected with a Titan, obviously). Her power is so good, actually, that I completely forgot until this point to upgrade her Gore Riders! So as soon as she killed the Countess, she did just that and then plowed through to Andy.

Radament was (breakable) PI, so the merc swapped in Reapers to break it and speed things up a bit. I had been carrying it along in the cube for situations like this, but since PIs are cropping uo more frequently now, the merc started wearing it full time. She collected the staff easily, and a couple conveniently-placed zombies let her DFlight up to the altar where the merc could handle Fangskin. I switched it down to /p1 for the Arcane Sanctuary in anticipation of ghosts and... that was a good idea 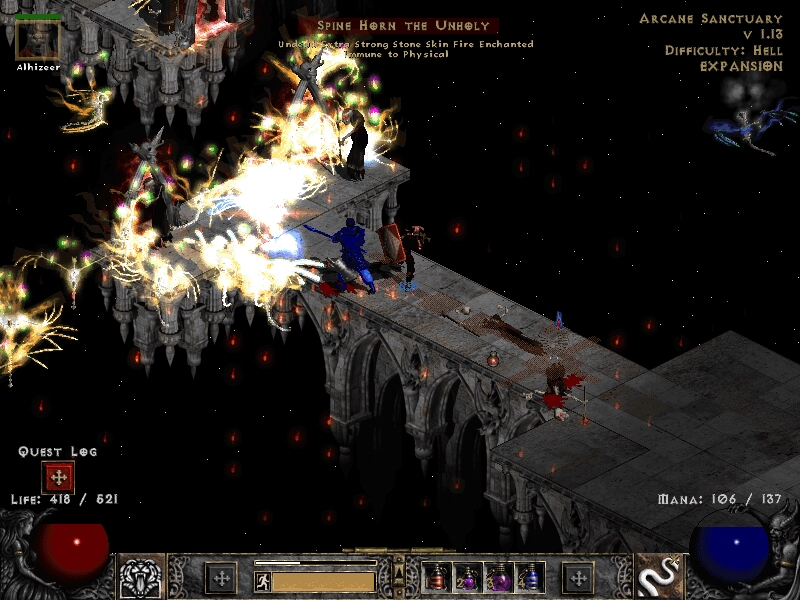 I actually decided to keep it on /p1 from this point onwards. Not because of killing power, but just to keep me from having to duck back to town every few minutes to restock potions. Things were much smoother now, so Red cruised easily to Duriel and on to A3.

Had to be quite careful to let the merc lead through the jungles. As long as she did so, the groups absolutely melted to DTail, but the risk of getting overwhelmed was constant with the quick flayer types. Even so, Sszark was soon dead, Endugu followed, and Sarina was taken out from the comfort of a doorway. A few deaths along the way, but mostly from being overly zealous while being amped. And then things ground to a halt.

The Council was separated and taken out VERY carefully, and then once she hit the Durance her squishyness-factor went up to abot a million. Very slow going through there, making sure to follow the merc at all times. Starting to really regret going titan on an already very restricted character, but I'm too damn stubborn to change it now. Meph, for some reason, decided to come join to party while we were dealing with Mr. Voidbringer. 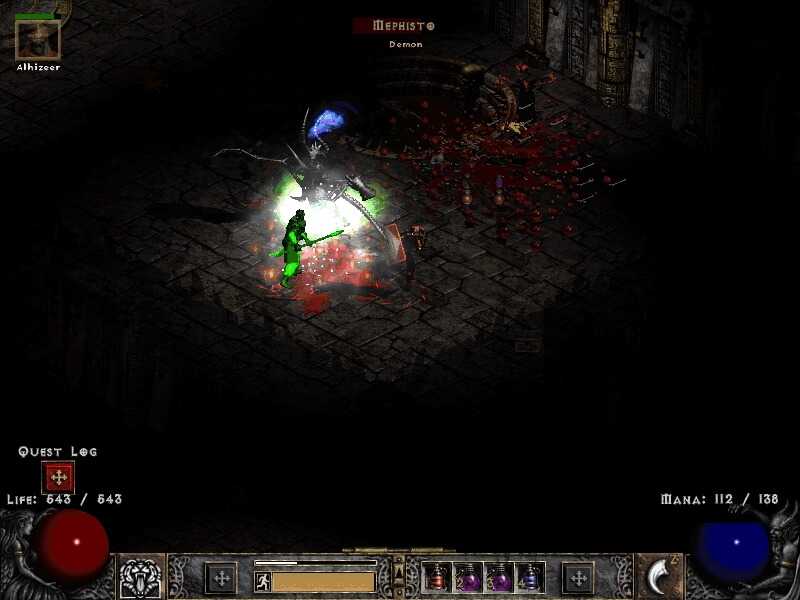 He fell with no real trouble (and no reward to speak of) and it was on to act 4. Here Red took a pretty much permanent back seat to the merc, allowing him to lead while she came in at the edges of groups to take them out in chunks. Gloams made the PoD super slow, as she can only take a couple hits before biting it. Izual fell, the Forge produced an Um, and it was on to the CS where things got even slower. Things are getting a bit painful now as the merc is beginning to die to.

Luckily, the fight with big D was predictably easy. Snugged in front of the hose, /p1 meant that DTalon could shine with her abundance of CB and OW.

The final act. Honestly, at this point I just wanted her finished. Being one hit away from death at all times can get a little bit old. Funnily enough, act 5 was actually much easier than A4 in this respect. Lower life monsters let the merc plow through more easily, and therefore make things safer for Red. Shenk fell, up through a (luckily Gloamless) Frozen River to save Anya, and soon she was facing the Ancients.

It took a few rolls, but eventually we got a favourable one, with Korlic (Spectral Hit/LE), Madawc (CE/Stone Skin) and Talic (LE/Extra Fast) falling in turn.

She then got pretty lucky with monster rolls in the WSK, and it was through to the Throne in no time. Despite Frenzytaurs being present, the Throne was finished quickly, and the waves (even Lister) were quick quick and painless. The big guy himself was of course a cakewalk with DTalon and Decrep, so it was Matriarch at 81. 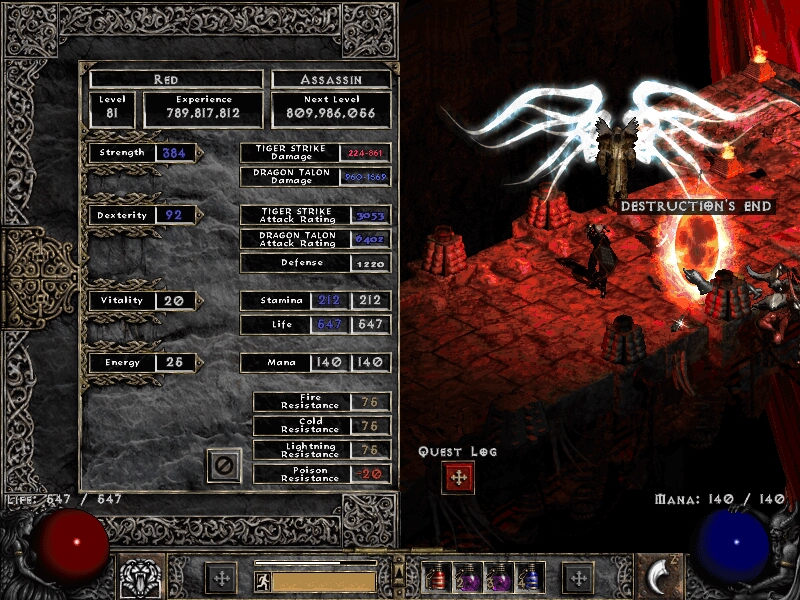 I'm glad to have her finished. The build itself was very fun, but the titan aspect made it a bit frustrating at times. More thoughts in her Mat thread, which is here.


Now those that are keeping track will note that she is the 7th character to complete the journey. Even though the sept is technically complete now, I am not finished with it yet. I referenced it back in this post but I'll take this time to officially say that I've got 4 more characters to complete for this project: White, Black, Grey and Gold. More on that after the MFO!
Reactions: PhineasB

Now that the sept is *officially* complete, it's time to dive into the non-rainbow colours (well... shades, mostly)! I've also updated the main post with the new characters respresented there, but the gear/builds will be updated for them as I go.

White is kind of a weird one. I wish it displayed better as actual white rather than a light grey, but beggars can't be choosers. 'Bright White' and 'White' both display the same as far as I can tell, so at least it gives me lots of options. Mavina's set made the choice easy, but I already did a bowazon, and it would be a shame to leave the lightning skills out of this since they are white. Bloodthief is white, so there we have it. A lightning Spearzon is born! 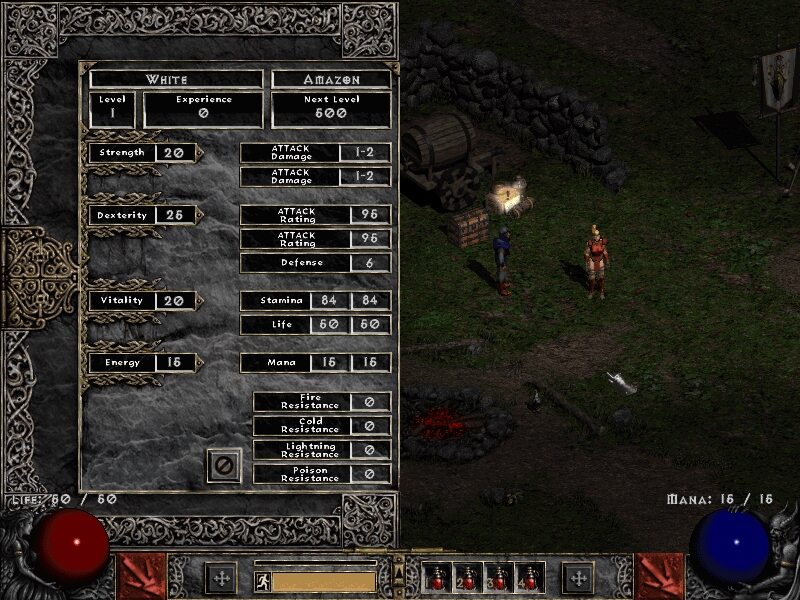 The only downside about Mav's set is that the circlet can't be used since it doesn't display graphically. Fortunately both Sigon's and Coif of Glory are both white, and display well, so we're covered for interim and final helmets anyways. Nice!

She is super straightforward gearwise. Basically the progression will be full Sigon's ASAP, then replace with Mav's as it comes up, with a couple other pieces thrown in along the way. The only unfortunate part is that she can't make use of socketing to get her there at the start since only PDiamonds display white (lesser ones display light grey). That leaves her with exactly zero options for weapons until bloodthief at 17 (there aren't even any shoppable affixes this early on), so she'll be punching her way for now.

She quickly grabbed her first S/U in Pelta Lunata and then boxed her way through the den and into the Cold PLains where (with the help of a couple XP shrines) she hit 8 and hired a merc to give her knuckles a rest. A couple levels later and the gear started becoming available. 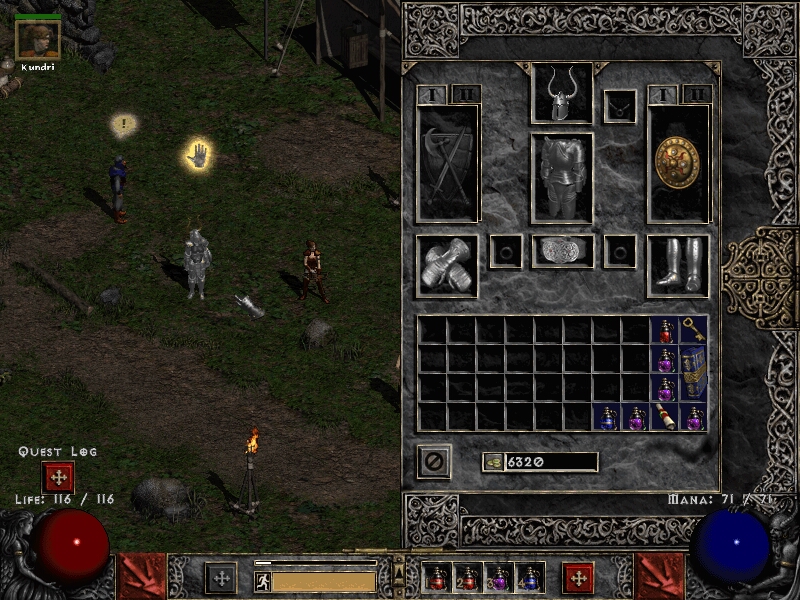 Lookin like a proper tin can now, she carried on through the act, subbing in Sigon's shield for the set bonuses, until she hit 17 and could finally get a weapon (the fire damage from the set bonuses can only take you so far...): 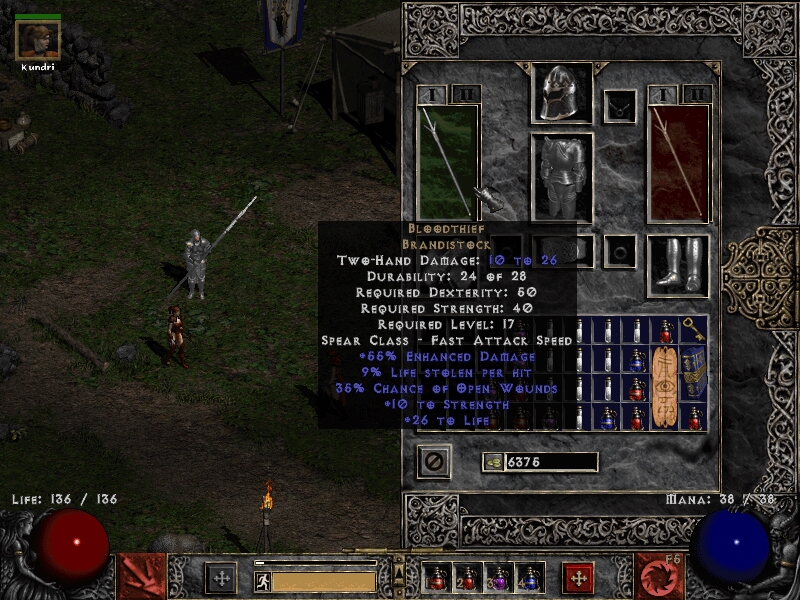 She also took the chance to swap to Coif of Glory, her end-game helm (that's right). Officially a spearzon now, she hit 18 on the way to Andy and is currently splitting her attacks between Power Strike and Charged Strike. CS did the trick on Andy super fast, and it's on to A2.

Well, with a savage polearm on the merc (later Insight) and the ever growing power of CS, it was smooth sailing until her next gear upgrade at 29 with dual-SoJ. Soon after that she made her way to and killed Diablo, and then it was time for the XP and gear-bonanza that is A5. Her first official piece of Mavs set in the gloves, and she tore through the act reaching Slayer at 43. She quickly leveled to 45 for Mav's belt before heading out into NM.

A full inventory of skillers later and the destruction continued. She is an absolute force at this stage and mowed her way easily to Andariel, hardly stopping along the way to drink a potion or two, and equip an armour upgrade with Toothrow: 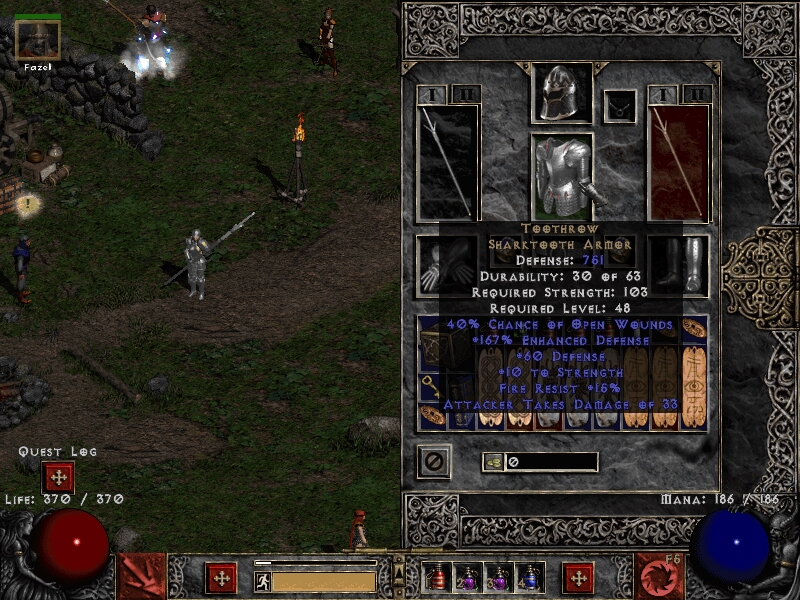 Did act 2 even happen? It must have since she now has a HF merc, an upgraded Bloodthief, an upgraded insight for the mec, and I have this screenie of her killing Duriel, but man was it fast. CS is insanely overpowered at this stage, and I'm loving it.

The small monsters of act 3 gave me a chance to try out lightning strike. It works very well against the crowds of runners and provides some nice fireworks too with 30 hits! 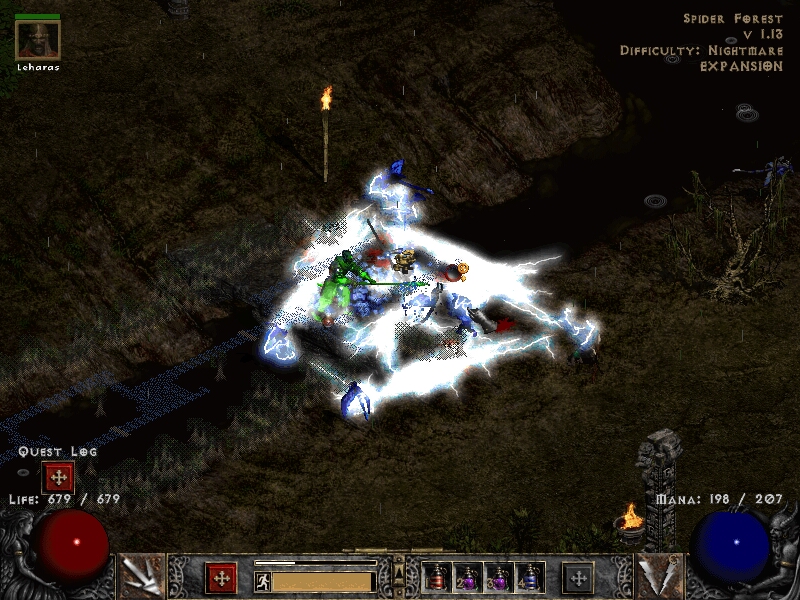 Nice! It's my first time really using it so I'll have to get used to it, but I like it so far. Easily through Szzark and Endugu, Sarina, and quite frankly, the rest of the act, and Meph went down like a pile of bricks.

Out into A4, Izual dead, HF an Um, she hit 65 for Highlords and through to Diablo in no time flat. 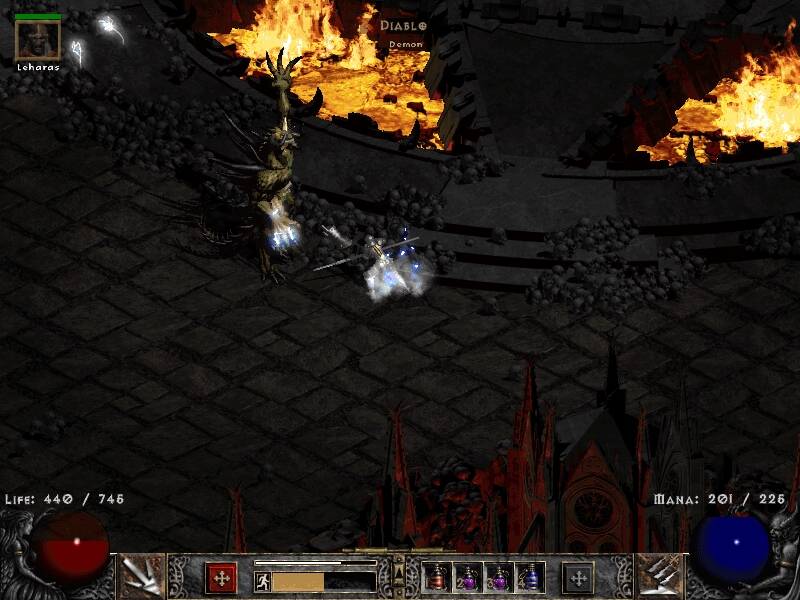 I didn't think it was possible, but A5 got even FASTER once she upgraded her Bloodthief to Mancatcher, and the merc added Delirium and Infinity. She is one-shotting pretty much everything right now, which shouldn't be a surprise. One last gear upgrade in her end-game armour (Mavina's) and it was Champion at 72. 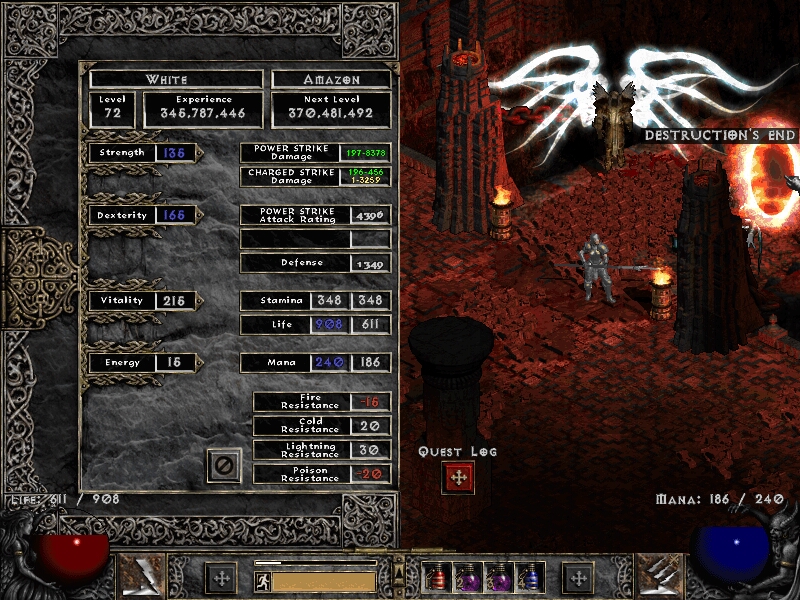 She has been super fun (and fast!) so far, I'm really looking forward to her trip through Hell.

Very nice, and really great progress. I love lighting strike if a spearazon, so hope you also enjoy.

That said, I admire your discipline, punching instead of allowing her to equip a . . . white javelin at the start
Reactions: Luhkoh and Pb_pal

PhineasB said:
That said, I admire your discipline, punching instead of allowing her to equip a . . . white javelin at the start
Click to expand...

Haha thanks! I won't lie, I definitely considered it. Punching sucks.
Reactions: PhineasB