Thank you LK, finaly i will do my hoto

I was trying to level my 95 MF Javazon and till the very end nothing worth mentioning had dropped.
I started to grumble so much until ...boom!
Now I have 4 Chams and 1 Zod. God, what am I going to do with those runes?

Also got a Sur two weeks ago from Pinddle!

My current shockwave bear found this today in the ancient tunnels.

I'm trying to remain objective given that this could simply be a case of 'latest and greatest' ... but I don't think so. This find and the manner in which it was found could truly be my greatest DII find ... ever.

A few weeks ago I got back into DII with designs for creating a fully decked out Hammerdin in 1.11b (you know, back when magic immune didn't apply to Blessed Hammer). To get things going I created my standard go to budget mfer a Frozen Orb/TK Sorceress. She bee-lined it directly to Hell Mephisto and started bashing his brains out on players 1 with about 100mf. Fast forward three weeks to last night, and I had nearly everything that I'd hoped to get from Mephisto and was starting to see some real diminishing returns on investment. So I decided that it was time for my Sorceress to enter the next phase of her farming journey ... LK. I doubled checked the forum for the player settings and drop patterns. Players 3 gives a 1:65536 chance for a Lo, Sur, and Ber so expect to need 21845 runs for the two Ber Runes, and two Sur Runes needed for Enigma. Hmm, sounds reasonable. After about an hour I found my ideal LK map (two campfire hut pairs immediately adjacent to the wp). After a bit of running I decided I'd go ahead and install the CRM and set all runes to orange as 1.13 had got me really used to orange runes and if I was going to do ~21845 LK runs I sure didn't want to miss a high rune when/if it came along. Today I installed the Advanced Run Counter and decided to get serious. 205 runs later I was getting seriously bored. After muling off a load of charms/jewels/gems/low runes I decided I'd take a quick break from LK and go do the Hellforge. Yes, the Hellforge. I'd hit Mephisto at clvl 78 and was now at clvl 90 but hadn't bothered to do anything past Mephisto except grab the quick +2 skill points from Izual. Mephisto's soulstone had been sitting in my stash for the last three weeks and for some reason now it seemed to be taking up too much space. So I relaunched the game and headed down to the River of Fire and was pleased to find that there were no cold immunes and was happily blasting easy to kill monsters at the default players 1 when this dropped:

This wildly tops my best rune drop since my restart (Lem from Mephisto) but also wildly tops my all time best rune drop from outside 1.13+ (a few Vex runes from various patches). And of course there's the delicious irony of finding what you're looking for the moment you stop looking for it. Now don't get me wrong, the path to Enigma is still going to be a long one, but stumbling blindly into a Ber Rune within 24 hours of starting the journey is pretty darn sweet! And now, back to LK! ... may I not have used up all my luck all at once ...
Reactions: Jpy, Luhkoh, d2lover and 10 others
O

Woot! First drop of the session was a grailer and it's the first one since I reinstalled. Found in AT.

Still missing:
-Sacred Armor x2
-Astreon's Iron Ward
-Darkforce Spawn
-Nightwing's Veil
-Stormlash* - technically I did find this once in a MFO a long time ago but someone kindly decided to claim it as a prize. It was my first unique Scourge. 9 Horizon's later, I'm still searching for this.

What a shame about your stormlash. Hope you find another one soon.
J

Finally muled off. Some of these maybe shouldn't have been kept idk. This is from 29 hours of running wp corpse in UK and gambling the gold from selling the item that pops out.

Reactions: teddeeboy, Yann, Helvete and 3 others

@jimsfriend so... what are you going to do with all that gold?
J

Got this orb today in Chaos: 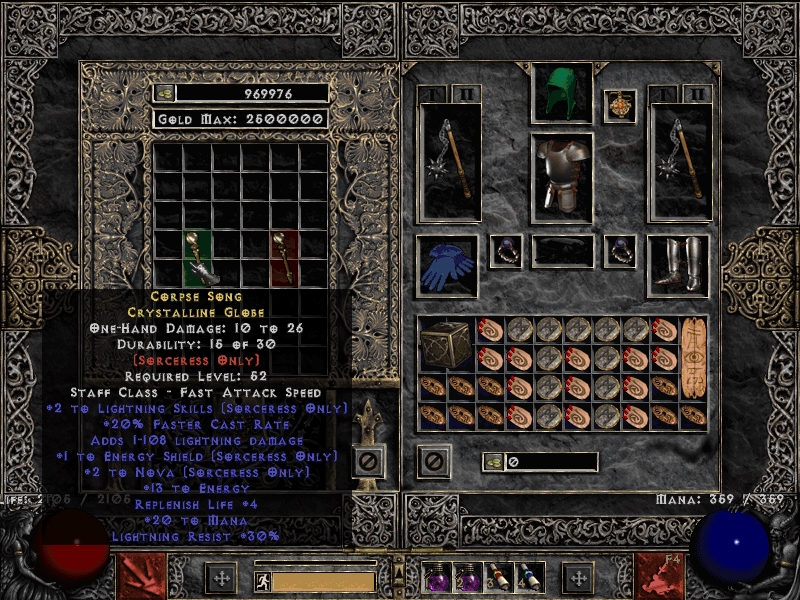 @ffs Is it better for Nova pit sorc than this and why: 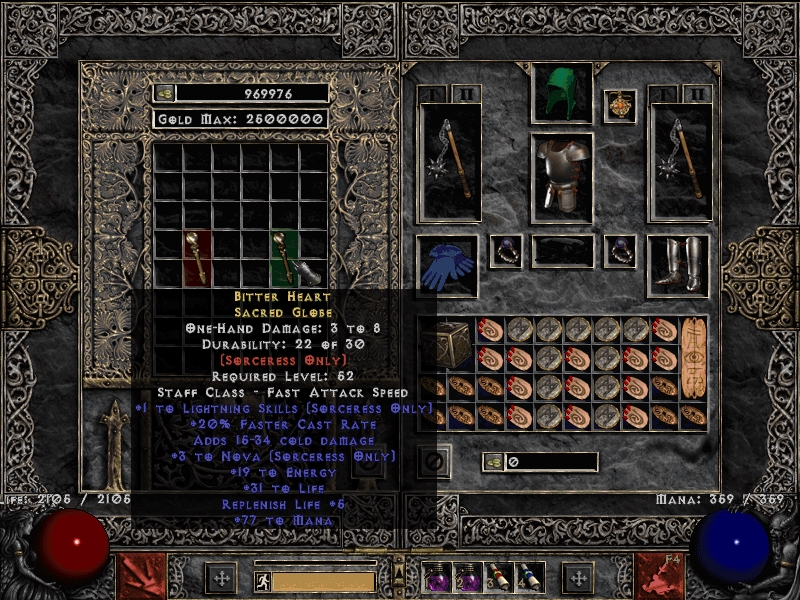 The lower one is better IMO, I have one with very similar stats and used it often. In terms of damage, a good Eschuta's will be slightly better than both, but the second one offers a juicy mana boost and some life as well. First one has some LR, but resists are not that important for ES builds, the +1 ES level is nice but less useful than life/mana I'd say. Rare orbs are cool, even though I always end up going for something else in the end. For Nova I often found myself either wanting 40 FCR from weapon slot, or not needing any FCR but preferring something else entirely (like CM for P7 or 180 MF sword for P1).
Reactions: ResTTe

I was thinking the same. Thanks for the info.

Has anyone here found a perfect Gheeds? Oh so close...

Found this morning my 4th wizard spike in 07 (i traded one for skullders already) with 20 failed set boneknifes, this equates to round about 2500 runs.

And some days ago I found this dissappointing unique after 24 set grand crowns:


Code:
The missing goldfind is really bad. And fireresists are no thing for physical chars since LoH.

but hey, I didn't search for it, so what.
Reactions: art_vandelay, Kinkara and saracen85

A classic and a grailer for me from a random monster:

Now I need just 2 more Arcaines Valors, one for a Barb and one for a Zealsorceress in 1.14d.
Was searching for a Balrogleather rack, but stopped resetting the map for a 3s eth Thresher^^
Reactions: entwilighter and art_vandelay
You must log in or register to reply here.
Share:
Facebook Twitter Reddit Pinterest Tumblr WhatsApp Email Share Link
Remove ads & support the site - Get PurePremium
Top Bottom