Triple Helix said:
When adding stat points to a character, it takes about a second to add each point. This may not seem like a big deal until you decide to respec a character -- 300 respec points would take about 5 minutes, and you have to press and hold for each individual point.
Click to expand...

I just reseted a character.
Holding Ctrl and clicking will add 5 stats. So basically that was already implemented.
And as already known Holding Shift will add all your remaining stats.

Excalibur said:
I just reseted a character.
Holding Ctrl and clicking will add 5 stats. So basically that was already implemented.
And as already known Holding Shift will add all your remaining stats.
Click to expand...

On Xbox that isn't implemented, sadly. Maybe in the next patch!
Reactions: snickersnack and Excalibur 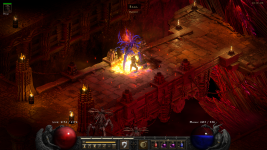 Three Baals in one Worldstone Chamber!

The clones appeared as I was running towards Baal. I kept going as I was on a mission to hit clvl 90 before bed, but, with moments left, decided it was at least worth a screenshot.

Encountered a perma-frozen act 2 merc situation today. Was questing through act 3 and my merc was hit by a cold unique pack and stayed blue. Gave him some thawing potions and after about 20 mins afk in town I realized he was still blue. Had to s/e to fix it.

Holy smokes! Patch 2.3 hit, and there is tons of stuff!
For example:

What do you miss in the patch fixes? One main bummer is that items in cube still don't get identified.
Reactions: DarkMaster and ipsilantee
P

Grisu said:
Holy smokes! Patch 2.3 hit, and there is tons of stuff!
For example:

What do you miss in the patch fixes? One main bummer is that items in cube still don't get identified.
Click to expand...

They soft AF for fixing Vipers, they were working as intended lmfao
Reactions: maxicek, Kartongen, PhineasB and 1 other person

omg they fixed auras from items from switching on/off. This is HUGE for characters wearing items that grant auras. Dual dreamers = actually functioning now. My favorite character, Magus, wearing Hand of Justice/Dragon/Dream/Dream is pounding faces full speed now. I'm so glad because while I don't mind playing in 1.14, this particular character is so fun to play with a controller. All melees are fun to play with controller but this one is my favorite melee and it's just so much better when the auras actually work at all times.

They sort of mentioned this in patch notes kind of.. but they said

UH NO dude. They were toggling on and off at all times. Luckily the fix fixes it at all times so they work fully correctly now praise tiny supple baby jesus.

Force move is in key bindings for those of you who are looking for it. Can't bind it to main click buttons unfortunately, kinda sad about that. Force move is kinda meh overall, like maybe I'll get used to it but you can't just hold it down like you can in d3 - as soon as you attack it gets reset, so you have to re-press it. Still kinda of nice not having to click everything all the time. Also with item labels always showing there's a lot less worry about accidentally picking up items. Maybe I'll figure out a control scheme I really like in the future nothing is jumping out to me right now. I'd like to use space or something for force move and just always have items showing but I'm not sure if I like that yet.

You can set default players settings in the gameplay settings as well now too, and can change them on the fly using this interface as well I guess. HOWEVER IT RESETS EVERY GAME. WHAT. How worthless. This is the worst implementation of a setting I've ever seen. Good to at least give console players the option, but why reset it every game? It's all the way at the bottom too, so if you want to set it every game, you have to go into settings and scroll AAAALL the way down to the very bottom of all the gameplay settings.

/nopickup functions with auto-gold pickup now fully correctly, and also functions correctly period when using a controller. On controller particularly this is really nice because there were times like at the throne of destruction where even when item labels were toggled off, items that you were standing on top of would show up anyways no matter what version of settings you had on. Now with /nopickup enabled, item labels will not show up unless you specifically have them toggled on or are holding down the show item button. VERY NICE. Great job!

I super enjoy push-to-cast. This is great on casters, it's great on melee, it's great for everything. pushing a button and having it cast is just like... pure bliss my guys. This one change alone is such a massive QOL that it puts the final nail in the 1.14 coffin for me personally.

IAS Cap was brought back - this change is undocumented in the patch notes. My assassin trap laying speed is back to normal I can't say I'm surprised but I can say that I am sad. It was fun while it lasted boys. Oh well, guess I can stop looking for that matriarchal bow.

Kinda sad about them removing dead mercs from showing up in town when making a new game. Was a nice little reminder to go bringem back to life.


The implications of a patch like this are pretty huge imo - It shows strongly that they likely aren't going to stop development of the game yet. We'll probably see more patches like this one! While some things are a miss for me (weird choices with players settings slider), pretty much everything else is huge overall for D2 and a big step towards making the game really feel more modern. I hope to see more of these types of options in the future. I really like that there isn't a departure from what D2 is here, it's just giving more options for interacting with the game, I'd love to see more.

Now lets get some balance changes as well for those underperforming underused skills and maybe some items as well *runs and hides*
Last edited: Dec 3, 2021
Reactions: Foghorn Leghorn, Gynli, DarkMaster and 4 others

Fully acknowledging I'm an old man telling the kids to stay off my lawn, I can't believe Blizzard "fixed" the Vipers, after the bordering-on-disdainful-to-players "working as intended" response for so many years. Nihl just got that much more attractive as a target, I think, if you are able to get manageable load times for D2R (which I am not, and therefore won't run any characters in D2R seriously any time soon).

Can someone check the first post and confirm which bugs and suggestions have been fixed/added so that they can be removed from the list? I removed some by checking your posts.

Also, whenever adding a suggestion or bug please, refer to which version it is present (PC, console etc. )

Bug fixed: Windows in the A4 Cathedral are no longer "An Evil Force" 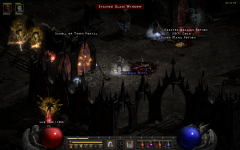 I noticed that on my first playthrough. Anyone tried getting killed by the evil forces near meph to see what they are?

What I find interesting is that they have fixed bugs that are pretty obscure and are unlikely to come from the player base complaining about it. So there must have been a backlog available at Blizzard when they started work on D2R.
Reactions: Ghonn, Foghorn Leghorn, Helvete and 1 other person

Pretty massive patch, I must say. I kinda liked the dead merc in town thing, though. Now I have to try to get used to the cast on select thing... Should be awesome for CTA, but I'm getting old and I don't take as kindly to changes as I used to

New suggestion with the new patch: Allow the mousewheel to be bound to skills. (This was possible before the patch and in Legacy and since it's also possible in D3, quickcast is not a valid excuse for the change in my opinion.)
Reactions: NorthDakota

Cattleya said:
New suggestion with the new patch: Allow the mousewheel to be bound to skills. (This was possible before the patch and in Legacy and since it's also possible in D3, quickcast is not a valid excuse for the change in my opinion.)
Click to expand...

Definitely need to bring it back. If you had it bound before, it will carry over to now, or at least it's carrying over for me. I thought maybe there'd be a work around by editing your default custom controls by editing the custom.key but I'm not sure how to edit that file (opening in a text editor poops out a garbled mess). While they're at it they should allow force move, left click interact, right click activate to be bound to other things as well. More options please!

NorthDakota said:
If you had it bound before, it will carry over to now, or at least it's carrying over for me.
Click to expand...

It didn't for me. The first thing I did was open keybindings to look for force move, and noticed my first two skill slots no longer had keybinds. At first I wondered if I just wasn't using them as there are more skill keybinds than generally needed but then I quickly noticed the skills I had bound to MWU/MWD no longer had a binding.

On the bright side, there was a tweet saying it was a bug, so hopefully it doesn't take too long for them to fix it.

Bug or Perhaps Suggestion:
Clicking Alt will not show any items when you have both the inventory and the cube screen open.

Suggestion:
Barbarian merceneries can receive some Warchies as a buff. Will make them much more useful, will create some more strategies and perhaps break the domination of Act2 Mercenaries.