Hit 96 on my AT sorc - actually went really fast which makes me question how many AT runs I've actually done total in my career. I'm here under the impression that I've done millions of runs, apparently not the case. At any rate, I'm ecstatic to hit 96 on this character with AT runs and wanted to share. I've been rerolling maps at long last after realising that my AT map wasn't actually good. The issue I was having is 1. not a lot of packs. I loved my map so much because at the very beginning there were 3 tiles and often times I'd have 4 packs spawn within 3 teleports of the entrance, sometimes as many as 6 in the first 3 tiles. But usually 6 possibly 7 was the max. The 2. issue is that my chest spawned on a tile adjacent to the entrance so there's no hope for that bonus pack? If I understand correctly? Or whatever it was, I was looking over the spawn thing and it recommended spawning the chest tile as late as possible. And most importantly issue #3 is that my spawn locations for packs were absolute garbage as far as spawning inside small hallways. One at the beginning 100% of the time spawned in a small hallway, another on one of the first three tiles spawned behind one of those awful square things, and at the end of the run I had a pack sometimes spawning in another hallway. Awful.

Sometimes though it was the god run where I had 6 packs in like 30 seconds spawn right next to the entrance which was neat. I was so hesitant to reroll this map because it felt like home to me, you know? you run a map so much that eventually it's just absolute auto pilot. The fact that all these easy packs spawned right away at the beginning, always 3 easy ones, and usually 4 easy ones, made the run so nice. But getting those last 2 or very rarely 3 packs was a pain, because although they were close, they were in awful locations.

Once I started rerolling maps and stuck to some good-looking ones (wp in good location in A1, AT entrance close to WP), I realised how absolutely awful those bad luck hallway spawn locations were for my sanity and also that they're absolutely not always a staple in AT. I'd gotten pretty good at reaching/killing those packs but it was always a pain in my ass a minor delay, which I noticed is definitely not always the case. Now I got these maps with like, packs spawning in the middle of big open hallways, it's beautiful. Trying out this one map now that I'm pretty sure is garbage but it's gonna take a lot more runs. It's fun to run though because all the pack spawn locations are realllllyy nice. Like right out in the open easy to blast.
Reactions: MizzouFTW, Pb_pal, Luhkoh and 1 other person

@NorthDakota nice work! Really fun stuff. I love thinking about and discussing this map theory type of thing. Gets really complicated. I feel sure I'm eventually going to have to make a second AT sorc so I can reroll maps without losing one, but like you're talking about, it's so much more satisfying to see lots of progress on one character instead of splitting it up. I think 96 is great work for p1! 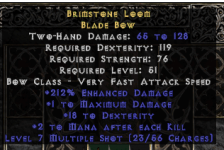 First thought that comes to mind was the relatively decent slvl multishot and amount of charges (no mana cost as well!). After double-checking on whether elemental damage transfers over all arrows, I took my Patted Firestorm Ranger out of retirement and put it to test... 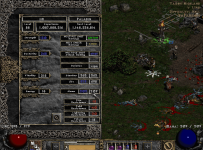 w/o Infinity (with Demon Limb Enchant. Merc with Obedience). Default gear setup prior to retirement. 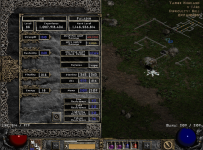 I'm surprised that this actually worked out well! Infinity setup rips mobs ofc, but the non-infinity is still pretty good. (all at /p1)

My Ranger uses 2 bows on switch; Widowmaker (Holy Shock) and Kuko (Holy Fire) and I normally resort to the latter for AoE clears. This bow opens up using HS especially in open areas and pits. Full repair is not bad either at 61k gold.

*Going back to build compilation to look for charges-based builds.
Reactions: entwilighter, Pb_pal, SirName and 3 others

After reading up on Tao of Poison...

Just to clarify, the ctc level 15 Venom from Treachery (+ Trangs Gloves) can effectively more than double the damage of a fully synergized level 30 Poison Dagger with only 0.4s added?

If this is true, I may need to reevaluate my Plagueazon. Bramble/Peace might not hold a candle to Treachery...
Last edited: Nov 14, 2020

I seem to recall something about Barb mercs and 2h swords? What is the problem, do they only do the 1h damage?
Reactions: Luhkoh

maxicek said:
I seem to recall something about Barb mercs and 2h swords? What is the problem, do they only do the 1h damage?
Click to expand...

So, I was playing my lightning sorceress yesterday. I dropped all my +vitality items to remember how many points she had spent in the stat. When I picked the items back up, she equipped the Spirit shield in the other hand. I think this is the 1st time I ever saw this happen, in so many years playing the game. Is this really how it should work or some kind of bug? hahha 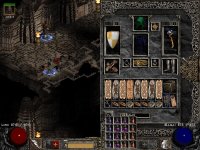 So, I was playing my lightning sorceress yesterday. I dropped all my +vitality items to remember how many points she had spent in the stat. When I picked the items back up, she equipped the Spirit shield in the other hand. I think this is the 1st time I ever saw this happen, in so many years playing the game. Is this really how it should work or some kind of bug? hahha

It's legit. For left-handers.
Reactions: Swamigoon

It's the former. Colossus Sword will still use the 2 handed damage numbers.

That's how Eth upped Headstrikers apparently beat out eBOTD CBs when it comes to the merc's raw damage.
Reactions: maxicek

Great, thanks @saracen85 . I'm more iterested fro RWs, but then for the same mods the difference won't be that large.
Reactions: PhineasB and saracen85

I see that GoMule's "Flavie Report" button produces a page that shows the treasure class (TC) number for every unique and set item.

Is there a reference somewhere that shows the quality level (qlvl) number of each S/U? I think it would be fun to find some grailers which are at their lowest possible item level, but to know these I think I would need to know their qlvl instead of their TC.

unique.txt or how it's called.

there could be some edge cases where the lowest possible ilvl is not possible because of the tc, but it should give you a start

What would you do in my position?

I have a hardcore concentrate Barbar at the beginning of nightmare(I think I will level up some more in normal) that I want to play through hell.

I want to socket some 1.07 eth Threshers, this kinda goes hand in hand with rushing the 00 chars.

So which one would you do? 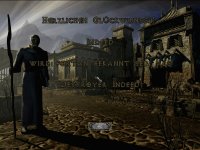 @Swamigoon I made this sheet with that info in a sortable excel list a while back.
Reactions: d2lover

Hi all, old SPF member from 2004 here. Just found this forum, I'm glad you all are still keeping the game alive.
Reactions: Kinkara, saracen85, SirName and 3 others