How should I keep track of my grail? [edited by Luhkoh]
Our primary wonderful tool is Flavie. Check the sticky at SPF for more info.
This web app is also commonly used and is convenient: LINK
There are also several spreadsheets floating around, including this one, by @TestyFish

How should I add myself to/update current tables?
The code tables editing is tricky sometimes. Hit the reply button at the last post with tables, remove quote tags and comment of the previous poster. Edit the appropriate table and add your own comment. Use the Preview post button and check if the table is right. Then submit your post.
There is no rule here when 2 or more players have the same total numbers of items left. IMHO there is no honor to add yourself above the other player if you are only tied with him.

Any other rules?
Yes, you have to use vanilla D2. That means no hacked or duped items, no drop-mods, no items you are not sure of their origin! If you use an Enigma with duped runes, you can't be honored to complete the grail quest! (And with that is said, all B-netters are out until they start a single player carrier ) You should also have the items physically in your stashes/characters.
EDIT: SPF accepted mods as RRM and RWM (or combination) are accepted, just specify them in "Type" column.
Last edited: Mar 21, 2020

Here is the latest and greatest status table:

Some history. Below are the quotes of everyone who completed their self-found grail throughout the thread's previous history.

DarkChaos said:
I am well aware this is a double post, but it's hard to think of one more justified than a completed grail. With the final item Astreon's Iron Ward in an absolutely stunning 2-day streak to find the last 2, the grail is finally complete. Check the thread for all the proper proceedings and stuff.

Corrupted said:
Done
Tyrael's dropped as my 84th TC87 unique
Only one Templar's, but twenty-three IKSC's.

It's hard to give an estimate how many runs I did, the main contributors were my 97 blizzard sorceress (Pindle) and my old 96.6 hammerdin (Pits)
Since then the finds have been scattered across my "new" 97 hammerdin (Pits/CS/WSK), a 95.8 blizzard sorceress (Pindle, AT), a 95 poison nova nec (Pits), a 92 overlord and a variety of lesser chars, mostly pitrunners, that didn't actually find any grailers IIRC.
Click to expand...

bcoe said:
Finally done. I remember my first unique was a steelclash. The last was my brand new Death's Fathom (25%) dropped by a random boss in the CS.... What a journey. I can't wait to put the new toy to use.
Click to expand...

Hrus said:
I have joined the -1 club.
With this awesome find during MFO.
I found 2 unique sacred armors during MFO, it can be either Templars or Tyraels, so I guess it's 50:50?

Hrus said:
Though I don't play D2 anymore, after a chat with Ugla, I realized I want to complete the grail before I am done with D2.

And after ~100 Andariel runs today (I run her around 500times before my hiatus), I found the last piece - Torch of Iro. Well farewell D2, welcome D3 (hopefully soon).

bassano said:
Even my grail is finally completed beacuse I found green War Hat from cows
last item I never found
I am glad that I joined so great names

Grape said:
So here I am, updating this table for the very last time for me, and joining the ranks of "Total remaining: 0". Feels good. This took a bit under 3 years, while having a little brake here and there (from an active playing at least), but quite an amount of hours was spent while chasing the most rare items...

The last item to be found was Tyrael's, which dropped week ago during the MFO.

Most of the Grail (finding the item for the first time) was found from AT with my blizz sorc (she visited some Meph and Pindle too). First char, trapper assassin found quite a bunch before that also.

My 99er Hammerdin found also some key items like Death's Web and Darkforce Spawn among others.

Javazon played a role when getting that Cow Set. Finding those boots was quite the struggle, I found 7 or 8 pairs Sander's Ripraps before the right ones. And yes, they are equally rare.

Last piece, Tyrael's, was found from the Pit with Singer Barbarian. I think that char found also my first Astreon's, so he's definitely among my MVP candidates

That's about it. Good luck with your grailing everyone!
Click to expand...

NanoMist said:
Found Steel Pillar, only Death's Fathom remain!
It's been 10 months since my last update..
Click to expand...

I found a rare Dimensional Shard about 20 minutes prior, so it was even more surprising to see the unique version drop so soon after. I had to triple check the 'Shard' part to make sure it didn't read 'Blade'.
Click to expand...

maxicek said:
Well done to all the winners, but especially @Babyhell for winning the Pindle category and for @art_vandelay taking second.

My scoring started solidly but not spectacularly with a Cerberus Bite on the first Friday, followed by Griswold’s Redemption on Saturday.

Then, after about 14 years of playing, the grail was completed in one hour of running on the first Sunday morning. I woke up early so I decided to do a power-half-hour before breakfast. Gargoyles bite dropped taking me to Grail -1. I had actually convinced myself that it was going to be my -1 item, I have seen so many gold ones before. Another half hour session later in the morning and the big one dropped - Finally I have a Death’s Web, prompting the virtual equivalent of running around screaming waving my arms in The Afterthoughts team chat. A great roll too, although after all this time looking I wasn’t going to complain about any roll. Grail completed, 1846 runs in.

My last score improvement came later in the day, about the 2000 runs mark with the second Griswold’s Redemption. 3500 runs were completed before I stopped on Friday. The last 1500 didn’t improve my score but included several TC87s and my Ber rune drought was broken, so the effort was worth it.

Albatross said:
I hereby declare that The Fetid Sprinkler is the rarest of all items.
Click to expand...

Albatross said:
I guess finding Tyrael's boosted my confidence... and resolve
The Most Fetid of Sprinklers
Click to expand...

Ok I'm done adding in the history section, everyone please feel free to post in the thread now! Hopefully some of the active members who finished the grail will post us a little retrospective, or some advice, and anyone feel free to add in some history of the people who reached grail -1, or any significant history on the "with trade" grail. I'll add my (modest) progress updates sometime soon as well! And of course tell me if anything looks off.
Reactions: Neck Romancer, Babyhell and Grisu

Code:
A new grailer from my AT Project.

Hi all, I'm going to post a recap of my posts this year from the other thread so the progress and formatting are preserved, and then I have a new update as well!

I'm finally ready to join this thread as I hope to take grailing more seriously this year and make good progress. Currently at -30. Recently found templars and death cleaver. Working on 6 ists for a phase blade .

First update. I've gotten a solid 10 off the grail since the beginning of the year. Some from nihlathak running for my utwinked 99er, some from the OBP tourney, and some others.

Code:
Link to imgur album of the drops HERE

And alright. Been playing probably too much during quarantine, but it's been super productive and lucky! I got grail -19 when I found cow kings leathers. Then this weekend I started playing a little more pitzerker. Found 2 grailers Friday and 2 today, to bring me to grail -15. Did maybe 6ish hours of magic finding. Still no griffons, fathom, or dweb, but I'm determined not to complain about that till I'm at -10 .

Found
LINK to album of all 5 drops

Code:
Now the only set item I have left is little old death's sash.

Did some Baal yesterday and today in the hopes of leveling Java quickly (yeah, didn't happen...) and farming Essences (and maybe GCs) and somehow now the game decided to reward me with two grailers, putting me at grail -5. First one I took a screenshot of because it was so random:

The second was from Baal himself, good old unique Ward, whatever , that leaves:
ordered from most to least important.

Made it to the single digits remaining! Was my goal for the year. I'm now officially complaining about not having any of griffons, fathom, or dweb. It's just time for one to drop already. Cant be too sad though with this recent drop 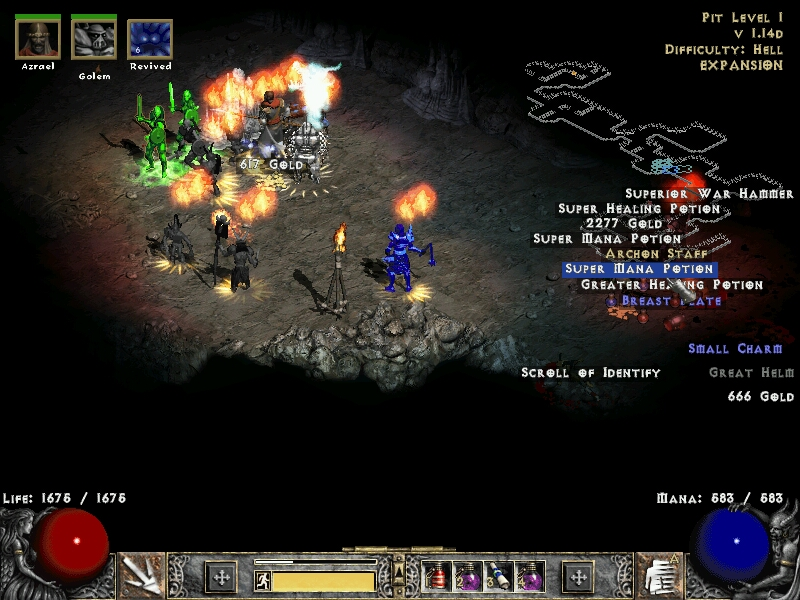 I did 1000 ancient tunnels runs with my blizz sorc for my 1kwm thread and found my last remaining exceptional item, blackhand key, as well as 2 executioner's justices. Did 1000 pit runs for the same thread with hdin and found a lot of goodies, but no grailers. During my RFL2 round in travincal, I knocked off 3 more grailers with a death's sash (last remaining set item), poison die facet, and cold die facet. Was hoping for a wisp or bk from there too, but no luck on that. For in RFL round 3, I got tired of having bad luck with my arcane sanctuary javazon, and so switched to pit necro. Was not expecting that mang songs! Also I keep finding unique spired helms, but no veil of steel's. Found my 5th nightwing's just a couple of days ago. Good stuff overall and hope it keeps up!

Unique Other
Bul-Kathos' Wedding Band, Wisp Projector, Ravenlore, Death's Fathom
EDIT: hope it's fine, but I added in the dates of grail completion for all the previous grails. I had that info in the post below the OP, but I love seeing the progression. 2019 was really a special year for spf grailing, with Grape being the only one bridging 2019 and 2012.

Luhkoh said:
I'm now officially complaining about not having any of griffons, fathom, or dweb.
Click to expand...

It's like you're deliberately avoiding the best items the game can offer. Quite the opposite of greed


Luhkoh said:
hope it's fine, but I added in the dates of grail completion for all the previous grails
Click to expand...

Not only fine, but appreciated. DarkChaos completed the grail in 2006, in HC
Reactions: Luhkoh

@Albatross haha for sure. I've been trying to be patient, but now I'm nothing but greedy . And cool! Definitely thought it was fun seeing those grail dates. And yeah DarkChaos... just absurd. His 99'ers are maybe more impressive (no RWM