Babyhell said:
So basically you just ignored PI? It is such a pain for my HC one I stopped to play him after Act 2 which exhausted me before killing him...
Click to expand...

No, decrepify broke nearly all PIs. It was just annoying to slow down and have to wait for merc to proc it. There were only two bosses I came across the entire run that didn't break immunity.
Reactions: Babyhell

Hmmm...so I was right trying to trade for one, but HC is not an active trading community - compared to SC. Well maybe I'll have to try to bring back my Zealer to work to get one!

Code:
This is what I was really after..

So, now what to use them on? Here are some of my options:
I could put together a cool Pally shield, but would they really be all that much better than HoZ (lvl 42)?
Edit: I guess the second one would be pretty good for a Tesladin. You get an extra +1 skill on Holy Shock, and would only need to use 1x Pdiamond/Um to get the resists up to +56/+59, still leaving you up to 3os for Lite Facets.. 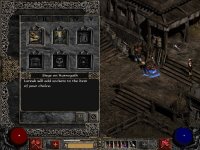 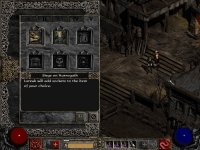 Ursprung is a Frenzy Barb, figuring that the lack of synergies wouldn't hurt him too much. May convert him to WW to run Counsel eventually. He went with 'Brand' Tusk Sword and a 1.07 Azurewrath for a while, but eventually just slapped dual Bloodletters on him. "Endgame" plan was to go with 'Crescent Moon' + Grandfather (off-hand) and a 'Delirium' Barb helm. However, GF is lvl 81 and the elite sword bases I have are all 61+. He was trudging through the levels, and I wasn't even sure if I could wait til the 60s to make a CM. Debating whether I should just make it in an exceptional base. A4/5 has gained him a few levels, and maybe I will level him up some on Shenk to see if I can hold off. I think I need an intermediate plan before GF though..

I don't really know what the heck I am doing with Senpai.. She gets a 'Deception' Cinquedeas/Fanged Knife (+199% ED, ITD, Slow target, HCMF). Trying out Tiger Strike + DTail to make use of the decent damage. Then, for the lack of better ideas I've been sinking points into Shadow Master and Death Sentry (for the CE). She is still a bit slow at the moment though. This one could be a slog through Hell. Other RW is probably gonna just be an 'Ancient's Pledge' Shield.
Last edited: Jan 9, 2021
Reactions: Pb_pal and Luhkoh

@D2DC The use of Cow King set was surprising, but inspired as a choice.

Such a great set, and I never used it for end game in my 7x7 for reasons I can’t recall. I have a Barb equipped with that set plus Beast in A1H, with the idea of an Ursine Bovine (his name). Definitely looking forward to questing him through Hell.
Reactions: D2DC

@PhineasB - It has been on my list to "use" with a sept of characters. Not necessarily "make" a sept with it (same as Hsarus' Set). They don't seem "build-worthy", but kinda nice to have for some side bonuses with a character. Also, figured that with the group, she would be pretty safe walking around with 500 def.

The CtC static was a good way for her to actually contribute to the group as well. Although it didn't seem to trigger nearly as much in the MP as when she plays solo.. strange..

Breaking the 8K barrier. Also very close to the 100 Mats & Pats.
Making interesting characters is getting more difficult now, but I still have about 12 in progress.
Reactions: Grisu, TheNix, Vildecor and 4 others

Awesome! Now just level them all to 99 and you're almost finished.
Reactions: Grisu, maxicek and Babyhell

Pb_pal said:
Awesome! Now just level them all to 99 and you're almost finished.
Click to expand... 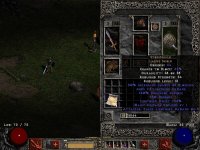 Stormrider was the whole inspiration behind this build, but... even a synergized lvl 20 CB is not very impressive. And, when I saw that I am staring down 15-17 fpa speed I began to get nauseous..

When I realized that the lvl 10 CL does okay damage, I immediately thought of Lightsabre. Only 5% CtC (attack, not striking) on there, but I am planning on pairing that with Cow King's Set and Wisp Projector. That seems like a much more palatable undertaking. Also, having a PB as a weapon will be nice symmetry with her big CtC sister who plans to use 'Crescent Moon' + dual 'Dreams'.
Reactions: PhineasB and Luhkoh

Interesting build concept @D2DC - I was looking at something similar with Last Wish or Destruction. I came up with similar issues - 14 / 15FPA with 15% ctc Nova = roughly one Nova per 3 seconds. That isn't enough to help much and it isn't like you can run away whilst waiting for them to trigger. No attacking, no novas
Reactions: Luhkoh and D2DC

@maxicek - Destruction is definitely cool for the "upper" sept. LW is out if reach for me at this moment though, and I am also trying to stick to damage dealing effects. And, for the "lower" sept I am trying to utilize some of the S/U options. Warshrikeis another to consider. 25% CtC, but only lvl 9 Nova. I may throw those on towards the end just to have a ranged option.
Last edited: Feb 5, 2021
A

Sounds like a pretty fun project. Might as well join, just to show off my number of finished characters (not a typo in the table.) I usually just play my character all the way to the stairs of Arreat Summit, before abandoning them. All in all I have 78 characters across three patches. Maybe one day I'll finish some of those "unfinished" characters.

@Apila - you have 78 characters, mostly played to Arreat Summit (hell?), but only 6 Mat/Pats?

Well, obviously to Hell yes. I used Excel to calculate all this. Out of the first 40 characters, the average level is 80.425.

I've never really seen any reason to progress past beyond the Ancients. I mean they give pretty good experience, which could be handy to some builds. I've finished the game many, many times anyway. With the modern runewords and twinking there's really not much challenge either. I have a couple of interesting builds in the works, but at the moment i'm only playing 1.07/1.00.

I guess I could always try the Tournaments, but I'm afraid my schedule can be pretty unforgiving. Not really willing to sign up for something I can't reliably finish.
Reactions: D2DC 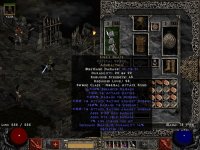 Couldn't hold out with Azurewrath until lvl 37 for Ginther's rift, so I made this one. She's been a bit slow, but fun. PLENTY of CtC effects:

@Apila But we are counting levels of Mats & Pats only.... You better get some of them to Baal
A 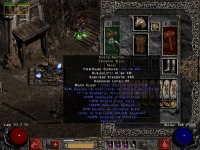 Messed up another Pat screen ... "grrrr"

Code:
Didn't really take any pics with the MP group.. We were always in a hurry, blasting our way through mobs.

Went back to claim HF quest, and got this NOICE RoF map.. may run him there a bit to see what he can get to drop. 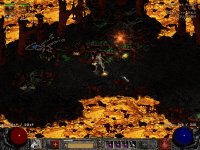 Mal is a good start. 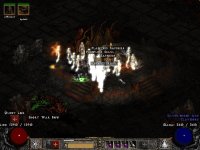 Thoughts: 4/5
2nd Class in the now-obligatory MP sept.. He played as a straight Fissure-caster all the way through NM. Started to run into some FIs in A4/5, but it wasn't too bad. Hell, he respec'd to min-points Fury wolf, leaving as many skill points as possible to boost Armageddon. Ran all of Hell with the Shape-Shifters MP group. So, needless to say, he didn't he didn't have much difficulty..

Kren-Douar was still very strong going solo though. He did run across a few FI/PI monsters that were unbreakable. Those were a no-go. Simple FIs were noticeably longer to kill, but still pretty easily manageable. Very strong and enjoyable build. If you haven't tried one of these, I highly recommend it!