@Helvete Ive read the walkthrough and I think it will help a lot ! The durimule thing is something we actually did back in the days. We called those "Gate- Chars" though.

Anyway, originally i wanted to play 1.05/1.06, but 1.00 seems more fascinating now In terms of rares: After a look on the affix-tables i could not find significant differences. So finding trires goldfind boots/belt would be possible in 1.00 too, right ?

@IQuitWoWForThis The affixes are the same in every classic patch. So yeah, you can get those boots/belts in 1.00 already.
Reactions: IQuitWoWForThis

@IQuitWoWForThis 1.00 has two enormous advantages, which is re-runnable Cow King, and Baby Maggot exp. This makes for easy items and easy exp, once properly set up. No Lances, but Whirlwind is so strong anyway that they're not needed. Also, if you so want to visit 1.05 or 1.06 later, nothing stops you from bringing characters and/or items from 1.00 - but the reverse is not allowed (and probably not possible either).
Reactions: IQuitWoWForThis

@Helvete Alright ty for info. Going P4 for a start now since im playing HC and i find those LE mobs too scary... ^^

Show me the money!

4 strong stats on this, although the -req is arguably useless on such a light armor. Still, kept it on the off chance that I'll play a twinked char, and not just rush through.

My Barb is LvL 32 now and doing CK Runs. Getting a stable King is still a pretty big mysterium to me... Anyways I still got a bunch of Uniqs from unstable Kings. No SoJ yet, though....

Diablo dropped the Gorerod for me, so I got this beauty from CK the very same day:

My favorit find in 1.00 was this, though. I had no ML at all and was like "okay, i desperately need ML and resis...." and then this amu dropped in A3 Sewers

I have to say, that i really do like 1.00 ! A lot !!! Classic always has been a thing to me, i remember playing two ladder seasons exclusively in Classic in Patch 1.13.
CK running and Maggotfarming brought yet another aspect to D2 i didnt play before ^^ Currently reading Time Travelers Guide, CK Guide, Item Guide and this thread over and over. Funny that @m4ke is also currently in this patch. I could profit a lot from his questions in this thread.

Sweet, sweet manaleech! You should have no further mana problems with the barb, at least if your mana pool is enough for a WW or two!

It is quite convenient at the moment

I got two questions though:

1) Are you getting the triple Light Plate/ Dual Warstaff every run ?? Or how much of consistence can CK get ?

2) If I get a drop like one rare item and one blue ring: Does that mean that this patern will turn into a uniq ring eventually and i just should keep running the map ?

Or is a blue ring never an indicator for a possible uniq ring drop ?
M

1) I don't know about @Helvete 's map but it is possible if CK kills are stable and CK picks a Unique drop.

2) If I've got it right the blue is just a blue. If tou get Ring as a Rare (Rare drop) then the Ring is in CK's droplist and he can drop Gold Ring as Unique drop.

1) About every 12th run, going by gut feeling. I had other drop patterns which were very similar, but not quite identical on the same map. At least one which started with a war staff, and at least two which started with a light plate. CK can be VERY consistent, and the shorter the total travel distance town - travi - CK, the more consistent it can get.

2) CK always drops one magical item (his primary drop, as an act 1 unique). Then he drops at least one, but up to five more, from his special drop. In normal, his primary drop can't upgrade to an exceptional item (which would then effect his special drop), so he is at his most consistent here. If you pay close attention, you'll notice that if he drops a blue wand, then his special drop might always be a war bow. Rare --> OK. Unique --> OK if you don't already have it. Set ---> Fail, and will drop next item, let's say crown. This will always succeed. However, if you have both the unique war bow and the unique crown, both will fail, and produce quintuple durability rares, and move on to the third item and so on.

Now, if he drops a blue ring, you would get another item as first item of his special drop; let's say a War Staff. Now, the same code runs, and if rare, OK. If set, also OK. If unique, OK as long as you don't have the unique war staff. If you do, he will drop the next item, which might be a ring. If you have all three unique rings, he will move on to item 3, which could also be a ring, etc.

You'll notice that the blue item always corresponds to his special drop. This allows you to create an excel spreadsheet where you record his blue item, then at least special item #1 with every run. There might be more than one special drop for every blue item, but not many. So if you have a short distance map, with the king not too well guarded by other cow packs, you can now use the spreadsheet to "investigate" which items will drop if you keep certain uniques. In normal, this is pretty easy, but in hell you could get 40+ different drop patterns even if you kill the king in apparently the same spot.

Anyway, there is a lot more to CK runs than meets the eye, and a lot less to it than reasonably random, like LoD

EDIT: Oh, and you don't always get 5 rares from a totally failed unique drop in NM and Hell. Pikes erroneously have their exceptional upgrade set to "Great Pilum" instead of Lance (which can't drop until 1.04). However, throwing weapons max out at superior quality, so if CK tries to upgrade, a Superior Great Pilum will drop instead. This will fail even the rare check (obviously), so he'll just move on to the next item if there is one.

My sorc has pretty low str stat, but is running cow king, so has lots of the armor pieces he can drop equipped via str bug.

Normally, actually until today, frostburns have been giving its mana bonus even if the requirements aren't met, resulting in actual mana when full being higher than max mana. Now, however, I do meet the requirements via other items (also str bugged) but sometimes the mana bonus will show, but mana regenerates slower, and stops before filling the bulb. In this situation, do NOT attempt to re-equip frostburns EVEN if your str stat is seemingly high enough. This causes frostburns to get stuck in the cursor slot, and you can no longer move, leaving S/E as only option. The bug is fixed by swapping in a +str item (in my case a +19 amulet) and swapping back.

@m4ke & @Helvete : Thanks for your info ! I was able to obtain all of the CK uniqs including 5 SoJs and a new, nice Pike 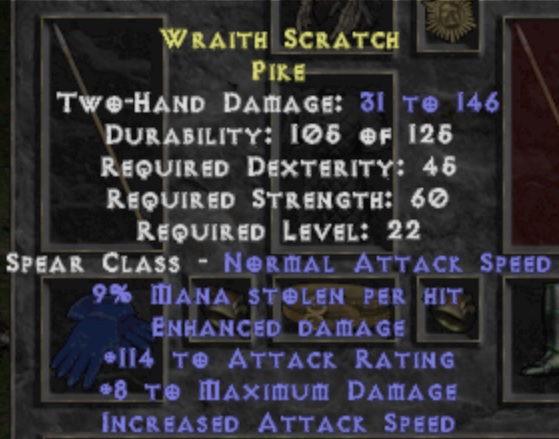 Unfortunately my mainchar (LvL 50 Barb) ripped under......mysterious circumstances.....maybe because "someone" tried to rush some chars through NM CS using Whirlwind.....

I have a LvL 30 Coldsorce and a LvL 28 Sword-Barb left and i was able to recover all of the Spearbarbs gear. Since i can only spare a minimum of time for D2 atm, the recreation of the Spear-Barb has to wait until i have more time again.
M

Ohh you play HC and you went whirling to the CS?

I die there every time I go there. It's Dep on my head that shows but somebody has casted IM aleady.. It sucks..

That's a nice stick. Good damage, and mana leech: check. Should allow for a lot of freedom when it comes to other gear slots. Might even want to use SoJs for rings if you have high life and use LL head/neck.
Reactions: IQuitWoWForThis
T

The Hell CS is just dangerous for any character. I had a L93 Necro die twice there just recently . Once to a boss group of LE OKs just at the CS entrance guarding it like disco bouncers and my Bone Spirit kept skewing to a Strangler hovering over the lava and not targeting the OKs and another time to Cursed and Teleport Infector who tele stomped my Necro. The Necros body needed the Barb to rescue it. The necro has only 632 life and no FHR as it is an MF char

However I still think the Necro is best equipped with skills to clear the CS in multi player games. The Cold Sorc is well equipped for clearing in single player but both are fragile.

If it wasn't for IM, everything in the CS except De Seis would be a cakewalk for the Barb.

What is the best pre LoD patch to run a zon in?

1.04 is the best bow patch by a long shot. Bow damage fixed, but bow skills still not nerfed. That is if you want to easymode.
Reactions: teddeeboy
T

Helvete said:
1.04 is the best bow patch by a long shot. Bow damage fixed, but bow skills still not nerfed. That is if you want to easymode.
Click to expand...

Thanks Helvete. I am thinking of taking the pskulls to that patch for rare rolling too

Hey guys, a little update from me:

I was able to rebuild my WW Pike Barb. He is king'd now and LvL 77. I did Duri in NM with LvL32 which was scary af, because the charge almost one-hitted me with active BO. The very second i had to rebo was just pure luck i didnt die..... Not very professional, but it did work out

I did the CS part (NM) this time with my LvL 34 FO Sorce which was also veery scary, because i did it on P8 to get my fillers to Hell diff..... It felt like an eternity of kiting with mana regeneration in between. Getting through hell was really okay. Did it with the barb on P8.

After that i did a ton of maggot runs. My girlfriend watched me doing it once and commented: "Omg, this is even more boring than the thing where you jump around and kick those armory stands over" (Racking)

Barb is now 77, FO Sorce 72, Sword GF Barb 71 and 1.05 LK Sorce 65. I think i rolled a pretty decent normal CK seed, which i am running atm until i obtain Rattlecage via gambling. Then i want to try out the GF Barb (its the last item missing for him).

The seed contains only 5 Patterns (the way i run it):

So it kinda drops only useful stuff for me atm, excluding War Axe and Warstaff . I realised, that sometimes dupes are created, but i couldnt find some reliable info about it in the forums. I assume, they appear just randomly ?