After ThouShallNotDie (pal) and AlreadyDead (nec), she is now the third Guardian of my HC Sept project.

Runneress of @Vang's Random Tournament 2020, her weapons were chosen in order to get some bow fun - as the title spoiled it, hopefully there were the javelin option available! For reference and all the details/theorycrafting, see her dedicated diary ;-)

As I wanted to complete a Sept of HC character at that time, she hadn't been played SP, and therefore took the time to max her resistances at LK on each difficulty - and it's a big part of her success for sure - in the end, she will find a Lo, an Ohm and two Mal in Hell LK that hadn't been used for the last stretch. Hellforge giving an Ist, it's a pretty nice collection of runes found.

The playthrough
Starting gear had been shopped, and already after getting to the Stony field AR rings had been found. Skillwise, Poison javelin was ruling the battleground, and Charged Strike was slowly unlocked.

Countess delivered her handful set of runes while grabbing the two sets of Stealth materials for Frida and her merc, and also dropped this really nice starting shield: 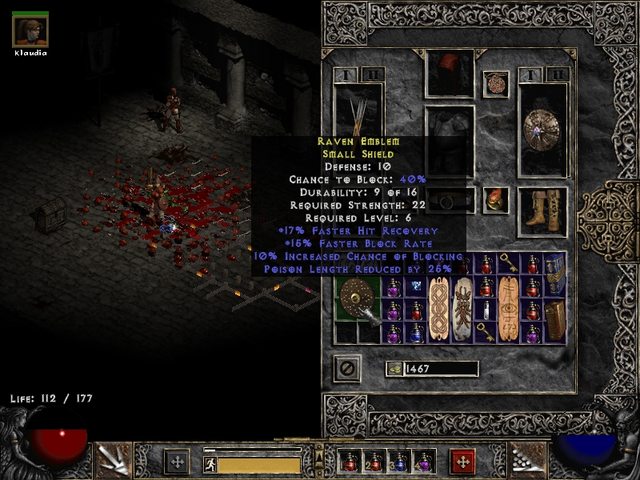 Afterwards, everything had been played on p1 for safety, and after a run-after-me-poisoned-Andy game, Act 2 was available at clvl 17.

The second and third act were kinda the same stuff, poisoning everything on p1 then p3 for most of act 3 to get done xp before act 4, with a bit of Charged Strike here or there - merc was doing big part of the killing to be honest. Major upgrade at that point was courtesy of - it doesn't happen so often - Ormus. This ring is really awesome compared to what can be dropped by him usually! 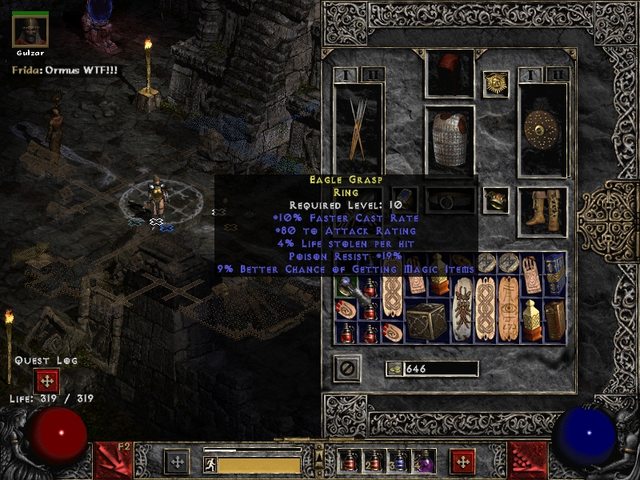 A bit of Mephisto run made him drop the first weapon upgrade, a magical maiden javelin with 17ed...not huge by itself, but in this format, quite an upgrade at that time!

Then it was time for LK running and resistances building before act 4. The best find had been this one:

Code:
Alongside, an amulet will help for the end of the Normal chapter:

Code:
After some more runs and the craft of a 38allres shield, it was time to move on.

Act 4 was p5, CS was p3. Diablo wasn't tough enough, but building up resistances had been a really good decision, lots of mana pots had been swallowed, and quite some full rejuvs too. A nice reward here, as the dropped Rockfleece was usable, and ended on the merc.

Act 5 delivered 2os Round shield (Rhyme base), Kuko Shakaku's (Thresher and Pindle dropped), that could have been interesting with Freezing Arrow, and Anya dropped the a Maiden Javelin that will be kept until a replenishable will be found: 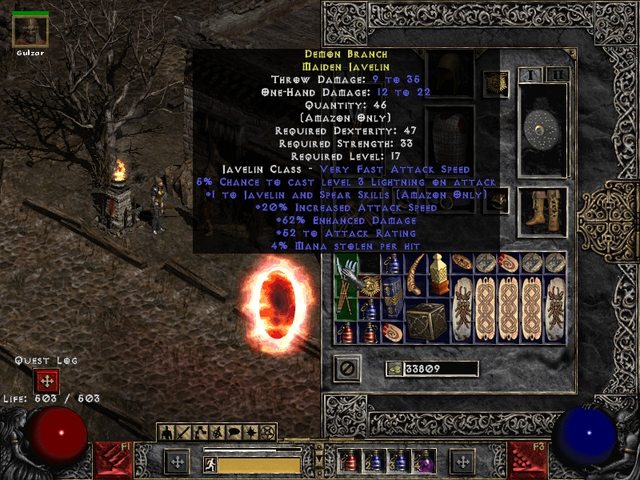 After a nice gambling session giving belt and boots upgrades, the throne room/Baal had been done on p7, she was Destroyer, and leveled up to 55 before jumping into Nightmare chapter. 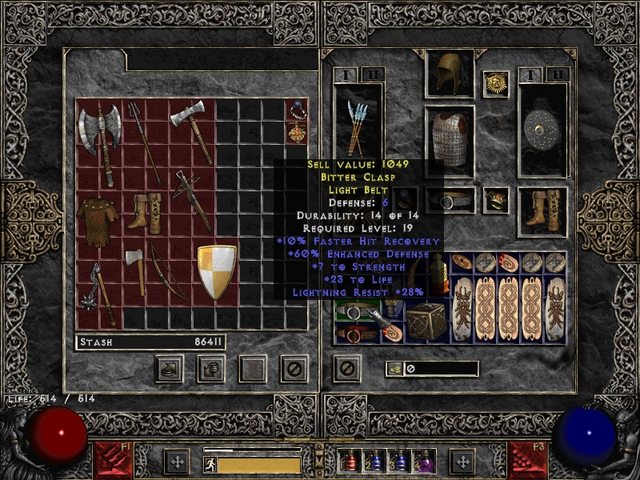 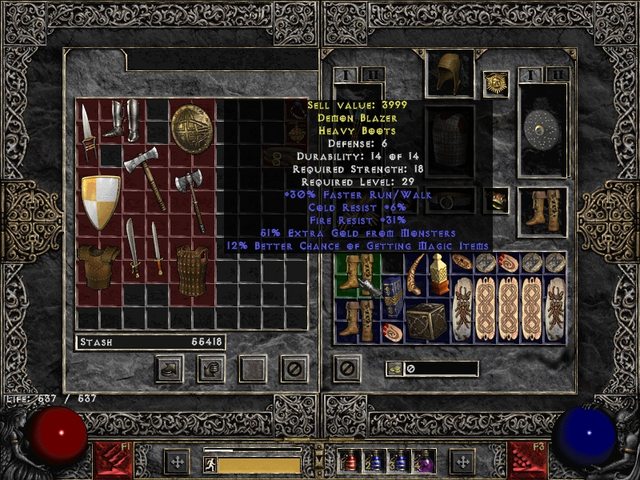 The playthrough
Given the skills, NM had been really easy...p1/p3 was the goal until act 3 where I could get back some xp due to over leveling in Act 5 Normal. The change came after Maggot's lair, when an ethereal Partizan could be created to an Insight (lvl 14 aura). Somehow funny, a Raven claw had been dropped in the Claw viper temple, and hit lvl 56 at Fangskin. 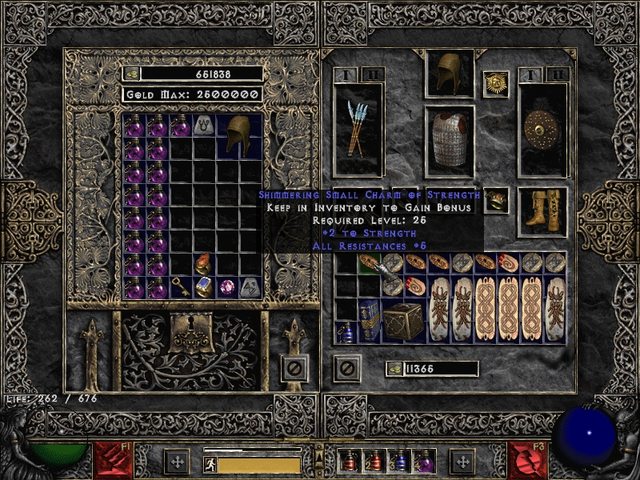 After a NDE vs Sarina, the Council had been Freezing arrow'ed, and after Mephisto, clvl was 60.

Act 4 had been an easy task, cleaning CS before seals, using Freezing arrow vs de Seis, and visiting town for mana pots vs Diablo. Act 5 had been run on p5 until Ancients (p1), p3 after them.

WSK delivered an amulet upgrade being a 10allres/33MF, and the Throne was tough starting from Lister's team, where Freezing arrow was of big use, and Baal wasn't that easy neither, hopefully only one clone had been summoned, and Frida became a Conqueror. Meanwhile armor had been upgraded for both Frida and the merc with Smoke runewords.

The playthrough
Run had been made on p1, for multiple reasons, the first one being the lightning immunes, the importance of the merc, and obviously...even at this setting the bliss was the Decoy availability!

RNG played with Frida a bit on acts 1 and 2, with the Countess room dropping an ETHEREAL razortail (a non eth one will be found after being Guardian), and two Crown of thieves were found in the Pits and in Arcane Sanctuary. The palace gave a 4 allres sc which was nice, then it was time to run a bit more of LK. In fact, those gave some charms upgrades that weren't even used (maxed thanks to the Smoke armor and NM charms), so were most of the runes found (a Lo, an Ohm, a Mal before being Guardian and another after...neither was the Ist Hellforge: untwinked, she had some options!).

Well after the craft of a eth Thresher Insight, a Stone in an ebugged Ornate plate, and Frida's amulet upgrade, I decided to make her quest again.

Code:
Diablo fight wasn't epic in any way, but seals weren't as easy... The strategy was portal oriented, went back to town at least a dozen times during this session!

Then Decoy was the absolute all around solution - scouting, tanking, everything, the most noticeable use being the Ancients...


First part had been to separate them - they all get the Stone skin mod -_- Hopefully each one his own immunity, so Frida could be useful for two of them! 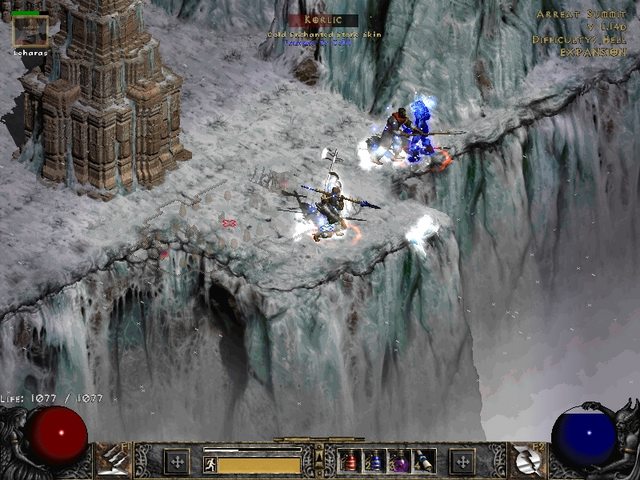 Each one his task, buddy

Madawc was the real pain... Leharas wasn't handling him at all, so it was the time for a bit of strategy! 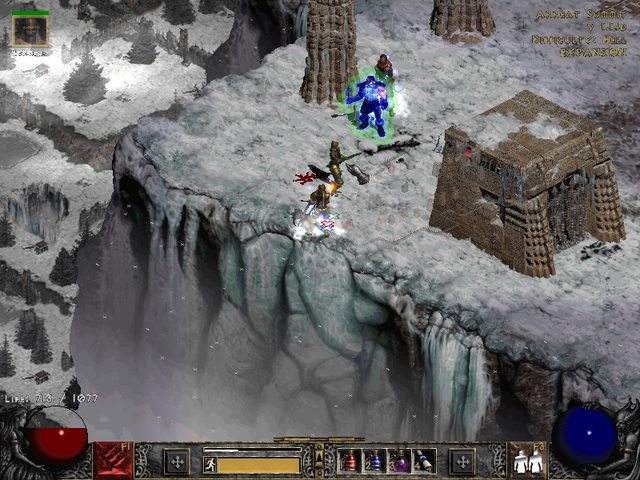 Hopefully he was stupid enough to try to shoot at me anytime... so i went with the Decoy shield!

10 minutes after, Madawc was still alive, and i had wasted all my arrows. But he ended cold shattered, it was time to submit Talic, easy task to complete the biggies: 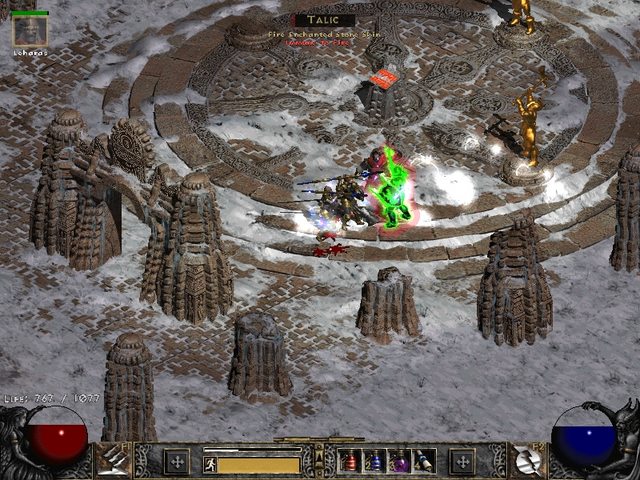 Well in fact he was Fire enchanted and that was no joke (300 hp down), hopefully i hadn't been too confident with this.
Afterwards, WSK was not that easy, but found paths really quickly, and no doom mods uniques, so it went well. The Throne was really easy using Decoy and LF, only had to resurrect Leharas twice, and vs Baal well... i didn't even needed to resurrect him, the story ended with him face down, 1M XP close to lvl 85 (that i did before updating my Murios' entry @D2DC ;-) ). 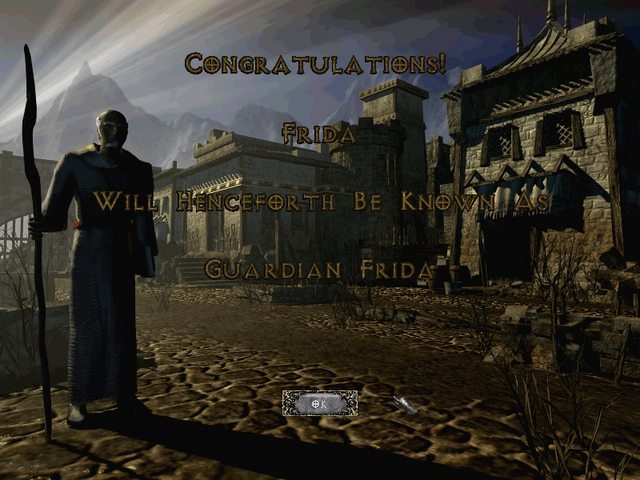 What's next? HC UT99eress!
After all of this, she completed the last 25 runs to hit the 700 Hell LK runs mark, finding her non eth razortail and a Mal on the very last run.

Thanks for reading, a special thanks to drinking @Vildecor for the rolls, and see her later for new adventures, in her dedicated thread!
Last edited: Jun 27, 2020
Reactions: Grisu, Pb_pal, saracen85 and 2 others

Great work, was a fun one to follow along with.
Reactions: Babyhell