Tournamenteress, pure Fire Meteor/Fireball with one point in static field 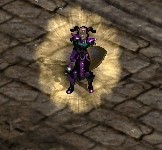 Introduction
Created SC in order to participate to @Luhkoh's Off the Beaten Path (OBP) tournament at a time I only had a HC VoR paladin, she was given that particular name, and started her career helped by some low lvl items found by the paladin and community support thanks to @drmalawi's charity project and @Gynli's leftovers, whuch allowed her to lvl using a Vipermagi and targeting a full Tal Rasha set, amongst other goodies. A big thanks to all the people that helped me at my restart, including @DiabloTwoinDC who helped with the paladin restart (this one is currently still not Guardian), therefore a bit Tournamenteress also by side effect.

So initially, the goal was to run Mausoleum for the OBP tournament, leading to a pure fire skilling. As everyone knows, it was a real difficulty for Hell questing, but it somehow was manageable thanks to patience, gold, and some mandatory skips.

Character dump at lvl 82 (one additional level after mat'ing). Note that for resistances, the full set bonus of 50 is not taken into account, in-game they are displayed at 71/75/75/75.

Ice Bolt: 0/0
Frozen Armor: 1/7
Frost Nova: 0/0
Ice Blast: 0/0
Shiver Armor: 0/0
Glacial Spike: 0/0
Blizzard: 0/0
Chilling Armor: 0/0
Frozen Orb: 0/0
Cold Mastery: 0/4
Normal run
Twinked normal run is always as easy as it can be. 5 points in fire bolt and Warmth, then Fireball and Leaf runeword, put few points in mastery asap, and when Fireball is maxed open skills to Meteor and max it before mastery. The one point wonder static field has been taken too, and later (really later, when Spirit shield had been crafted while running Baal NM) access to teleport, using an orb to unlock this skill at the beginning.

Leveling running Baal can bring us really far, in fact Tournamenteress went up to 67, so she could wear a 3 pieces Rasha setup (weapon amulet belt) for NM run through, with Shako, Lidless shield and fcr rings. For two lvls she could even use a self dropped fire skill fcr amulet, pretty nice.

Nightmare
Andy's map happened to be a nice one, so decided to try to get rings upgrade there for an hour and a half, and it was not that rewardful - nice Nagelrings nonetheless. Ironically, Viper temple dropped a real upgrade under the form of a SoJ, while questing.

First death happened on the first Council fight, and another one followed in CS, while misusing shortcuts and losing teleport.

Leveling has been done running Baal until lvl 79, then decided to open Hell's door.

Hell
Being specialized is a real pain in Hell. When facing non immune it's like flaming butter (bosses are melt really quickly), but most of the time during questing, it is a lot of teleportation go through - and that's the point in leveling as much as possible when task is easier and quest on p1 setting.

First task has been to get to Mausoleum in order to prepare OBP tournament, and on the process managed to hit lvl 80. After some runs and map rolling, as I wasn't satisfied with this play, decision was taken to unlock new areas, therefore Mat'ing Tournamenteress.

Andy and Duriel were easy or simple tasks, things started to get hard on Act 3, when I had to fight the Council - fire/physical immune and curse was the main plague, but still there is a lot of fire immune. Took quite some time to succeed, had to lock the fire/physical immune under fireball recovery - at least he wasn't attacking anymore and merc could poison kill him slowly, but path to Mephisto was opened. And this guy died so quickly in comparison! Could be a good target to run with a good map.

On act 4, CS was true hell, decided to snipe bosses to convoke Diablo. Almost easy, if it was not for Infector, that I had to bring almost alone in a corner and kill using static field and merc's tanking and weaponry. Here again, Diablo was a joke.

Act 5 was picking quests, Anya's resistances, and rolling fightable ancient's setup, who gave the lvl 81. Then it was jumping to the Throne room, skipping fire immune Lister's team (by bringing them out of Throne room and teleporting back to Baal), and playing with the body of Baal on the static field, using a meteor and a spammed bunch of fireballs to end the story.

Opened question
Decided to go full vita, but as I could face and still when cowing, Tournamenteress can be locked in hit recovery and force a quick death/S&E. Maybe using some dex instead for max block could be smoother to play? Not sure about life to be enough, as it must set her down to 650/700hp only...