[HC]BrianTribute, a Werewolf journey [in progress]

BrianTribute started his life as a Random Tournament runner, but getting no attacking skill he had to tap out vs Duriel. A S&E freed him from his limitations, will now continue twinked, as a Werewolf still! 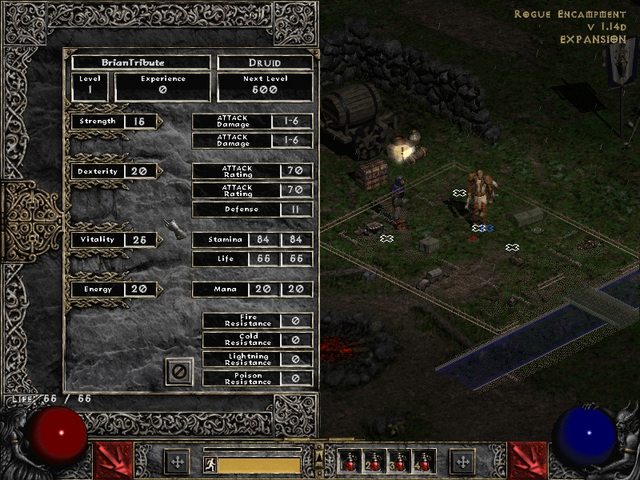 Well for normal he will be played as Werebear, as those skills are just real crap. I kept Armageddon for fun, I may put some points in by Act 4/5 Normal - if I ever get there.

The only hope is having a crazy Hell random roll including Fury (if Normal and Nightmare are conquered), and/or forget about SP, this will be so item dependent..!
The session reports
Act 1 Normal
Here is his first session run, to the Stony field!
The second one made him grab the Outer cloister waypoint, clearing everything up to the Black Marsh...mallow.
Afterwards, multiple short sessions brought Brian to clean everything up to the catacombs waypoint.
Then it was time to clean the catacombs 3 and cut Andy's head off.

Act 2 Normal
Start of act 2 is in the same post that the end of act 1... see previous link
Reclaiming the Staff session, followed by the segment until the beginning of the Arcane Sanctuary.
Radament's skillbook taken, Arcane Sanctuary not cleared but Summoner killed, ended at Canyon's waypoint.
Duriel fight made him tap out and leave the tournament on a S&E. Will have to defeat him twinked, with a respec to get attacking skill... But will stay a Werewolf druid!
Twinked career
To be written!
Last edited: Oct 12, 2020

Finding early weapons
Drop
Based upon Silospen drop calculator, it seems that in Act 1 I can only get Crystal swords, and have to wait for Act 3 for Giant swords and Poleaxes (from regular monsters at least).

Gambling
However, based upon this reddit post that seems to be valid for D2, the latter ones could be gambled at clvl 21 (the first one at clvl 11, I may try to gamble one on next session just to accelerate things vs the starter club)...