Doubted: A character born to fail, but yet somehow was like Frodo and was able to complete his quest against all odds, because the user is well um... not well versed in the virtues of patience.

Stats and skills and gear:

Act 2 defiance mercenary with an Upped Kelpie, a Duriel's Shell, and some Jank Blood helm. 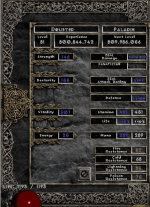 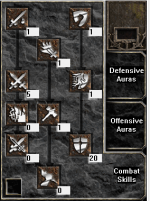 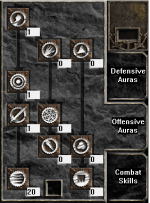 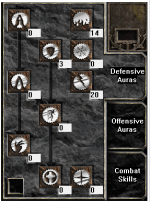 Paladins, one of my least favorite classes in the game, though if you follow my tournament journeys you would probably be under the impression I dig them the most. I dig the idea and a few unique builds with them, but frankly I suck with them in Hardcore.

Alas, I decided it was time to knock off one of my remaining two classes to guardian (other being sorceress). Leveling through NM was rushed to waypoints while chipping away levels until I finally dinged 65 to put on Baranar's Star I found a while ago, along with my Laying of Hands by Shiv, my furysin.

After doing some runs in NM Mephisto with Shiv who somehow became my mighty near 400%mf runner, a Vampire Gaze dropped giving me the last piece of gear short of a Herald of Zakarum dropping, so a Spirit in a Gilded Shield had to do with 40% All Resist as the baseline. While doing Baal runs, Atma's Scarab dropped which was a great boon for me allowing me to go without a secondary damage type other than the tri: 3-600 damage on the Star.

And now, our story continues to the non-juicy, lack of full details, and things only a lame-adin can write about:

Act1-3 was a total breeze. Nothing was challenging other than my first entrance into the real Tomb and was hit up by 3 rare mobs and minions, and I casually S&E to avoid any real work.

Act4, Gloams abound. Even with 95% resist with a maxed lightning they hurt. Slowly and surely I trampled through the areas and was granted a mighty Lum from crushing Mephisto's Soulstone. The rest of the Act provided minimal challenge with a retreat from Infector of Souls to split them up and a town portal then to waypoint from Lord De Seis as his minions were turning up massive dust coming in hot.

Act5, quite easy throughout the outdoor areas, but the Passage, Glacial Trail, and Ancient's Way proved challenging until the Ancients themselves.

They of course crumpled under my mighty Star.

The Worldstone level 1 was easy as making a chocolate mousse pie, but the rest was a time infested pull and retreat feast with a S&E once or twice to reload and a multiple of NDE's just like in the indoor other areas of Act5.

The Second spawn was brutal, as in brutally long, since I didn't have a point in redemption and the rest of the spawns took the same amount of time as it would take me to throw away a loaf of moldy bread.

Baal, took at bit as my CTH was only 60%ish but he posed no threat.

Notes: This lame-adin didn't bother saving the Princess's Bride wannabe Anya, she wasn't worth the glory, or resistance gained, though the shield may have been amazing, maybe I'll know someday.

While doing racking runs with Shiv, she fell on hard times and is dead as a door knob, but not cool like when Melvin became the Toxic Avenger, as she is just dead with no chance of her Venom resurrecting her.

Drops of note to help flesh out my someday Sorceress or other more enjoyable Druid, Assassin, Barbarian, or my Amazon I want to try:


And alas, images wrapped in a pretty spoiler: 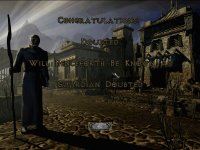 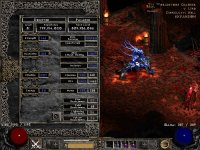 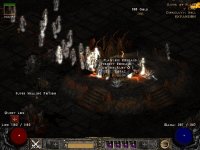 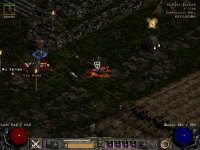 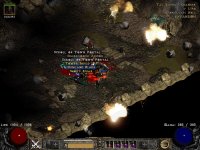 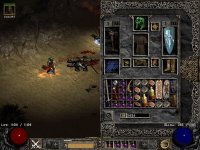 Congratulations! I don't see people using the 'Stone' armor quite enough. Did you find its golem charges useful for scouting dangerous areas?

No, I didn't even do that, but that is a pretty nifty thing to do, I'm probably going to go a High Armor route on my sorc, so I'll definitely use it then.
Reactions: Skezla

A stone-wearing Sorceress?! That sounds interesting. Will you be a traditional caster or are you thinking of going more nova/melee?

Going to sort of do what @CaseyJones did and it sounded cool to go high Def over max block. Not sure skills yet. Thinking something simple that doesn't require lots of +skills to be effective as I'll probably have near +0...

I am a fan of the nova type skills, running an ES/Nova light sorc, a PNova Necro. Not aiming is nice! Neither of these builds make good Ancient Tunnel runners so next up was to try Frost Nova I have also been pondering the benefits of the Prudence runeword and getting to use juicy EBugged armor...

Nice Guardian! I have to admit the idea of putting minimal points into Sacrifice/Zeal to improve max resists has never crossed my mind for improved HC survivability...solid decision combined with BStar's inherent 200%AR boost and 1-600 elemental damage to bolster your AR/Damage.

I've never messed around with HC Zealots much and am curious, have you ever tried out Conversion?
D

Nice job Vang, a melee Guardian is a great accomplishment. I agree that Gloams can be troublesome. One of the probs for a Zealer is the lack of crowd control. If you have a Darksight helm, problem solved. CoS shuts everything down. If not, then you can make a Nadir cap with 9 CoS charges and putting it on in those tuff areas. Good luck for your upcoming HC adventures.

Jocular said:
Nice Guardian! I have to admit the idea of putting minimal points into Sacrifice/Zeal to improve max resists has never crossed my mind for improved HC survivability...solid decision combined with BStar's inherent 200%AR boost and 1-600 elemental damage to bolster your AR/Damage.

I've never messed around with HC Zealots much and am curious, have you ever tried out Conversion?
Click to expand...

The maxed LR helped for sure as I switched to it when gloams were around and I had 3-4 on me. More than that and I had to retreat.

Conversion may have been useful in a few instances, I may try it if I continue this build. I also would have benefitted from sanctuary as well and almost used a lawbringer equipped Barbarian instead.

Congrats! Expected to see a Passion wielding barbarian who charges up frenzy and switches to Zeal.