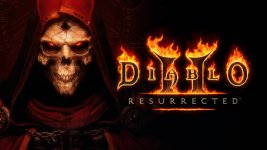 A new interview with Principal Designer Rob Gallerani and Lead Artist Chris Amaral has popped up on IGN.

In this interview, the team discuss community feedback since the technical Alpha completed, who they have approached updating the game's art, and the implementation of controller support in the remaster. Here's a quick snip:


As an example, in the original, monsters that have been slowed or frozen turn bright blue to really make their status effect obvious. In the alpha, however, that blue seemed a little muted by comparison. Was this intended? Was it about establishing a darker atmosphere? “We want everything to feel moody, but still within the realm of what Diablo II is,” Lead Artist Chris Amaral responds. “We don't want things to be too dark, we want it to be appropriately dark and match the original game. That frozen effect, that's actually something we’re currently adjusting. In fact, we adjusted it a day or two ago. Again it’s all very much a work in progress, but in going through the feedback that specific example has come up.”​
Check out the full interview on IGN.
Click to expand...