Over the past couple of weeks, we have been busy updating the Diablo 2 Resurrected section on the site to reflect the visual changes coming to the game. This includes updating all the items in the Diablo 2 section.

One of the things we were intrigued to check out was the item sets and how they look on the characters both in the menu avatar screen and in-game. Thanks to PureDiablo community moderator Dredd, we managed to add all these new visuals to the item set pages in the D2R section.

The development team appears to be keeping as many of the item sets as similar as possible to the originals which is great to see. As these images are all from the Alpha, it’s likely the look of some of these item set combos will be tweaked over time based on feedback from the community.

That said, it’s unlikely they will be drastically changed. As Dredd points out, there are some things that do not appear on the avatar screen but do show in-game. These discrepancies could be sorted once the game releases depending on whether they think it’s important the avatar screen reflects exactly what’s in-game.

For example. the aura granted by Tal Rasha’s Wrappings is missing on the avatar screen. Another example is the avatar screen does not show the vampiric form the Trang-Oul’s Avatar set grants but that’s probably to be expected.

These issues are not just confined to sets. Ethereal items such as Titan’s Revenge are not showing as transparent as they should both in-game and on the avatar screen.

There are however some nice touches applied to armors such as reflections. On M’avina’s, as can be seen on the shot on the left, the character is standing next to the blue waypoint flames which reflect off the armor.

Another example of how the team is keeping items as authentic to the originals as possible is the Hawkmail unique body armor which retains its green colour.

So as you can see, it’s not just sets that are being recreated as close to the originals as possible, all weapons and armors are being looked at quite carefully.

Below is a list of all 32 set items. Each page includes a shot that compares the avatar with the in-game look to give you an idea of how some things are currently slightly different in-game compared to the avatar.

Don’t forget to check the Diablo 2 Resurrected site here at PureDiablo for everything you need to know about Diablo 2 and the remaster.

Many thanks to Dredd for compiling all the images.

It's time to check out all the item sets in D2R. We pull on the gear for all 32 to see what they look like. Are they faithful to the originals? 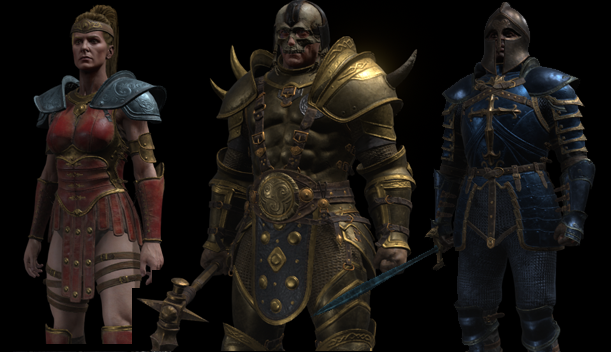 
Check out all the updated Diablo 2 Resurrected Item Set combinations in the game and their visual upgrades both on and off the characters.

Many thanks to @Dredd for his work on the images.