Welcome to a guide about what Diablo 2 Resurrected items to keep. This guide focuses on unique and set items and answers that question we’ve all had: Is this worth keeping?

The answer is not always simple, but I hope after reading this guide you will have a better grasp of these values. More importantly, I’m going through every unique and set item in the game so you can search this list and judge if that item you just found is worth stashing or if it’s safe to trash it.

Let’s quickly go over the categories of items in D2R:

Now, just because you’ve decided whether to trash it or stash it – the next step is to price it. I’d love to do that here, but these prices fluctuate rapidly. However, there is a solution. We have an entire forum devoted to price checking with fast and accurate pricing of your item. If you want to trade your treasure, then check with us first and get an up-to-date value of what it’s worth. Or just glance at my Pricing Guide if you want a fair estimate of value

We’ll be looking at items within Demand & Value categories. Each section goes over more widely used items and then drill down deeper to look at items based on more build and archetype uses

We’ll start with the High Demand / High Value category. Let’s begin with these singular items that are some of the rarest finds in the game and are also used by multiple classes. Very few of these items will last very long on the open market

Now let’s break down the HD/HV items that are either class or archetype-specific, most of which are currently Best in Slot. These items make up the handful of unique and set items that can be worth High Runes with the right rolls

The next category is our High Demand / Mid Value items. Mid Value doesn’t mean you should sell it for PGems, it just means these items will rarely be worth more then mid runes (Pul – Ist)

Next, let’s go through the High Demand gear that is used by melee builds – and can also command a decent price on the Marketplace

The last portion of our Mid Value gear is our caster and ranged items. The demand is probably a great deal lower than other High Demand items so don’t expect these items to trade quickly

This is the next to last category: Low Demand / Low Value items. We are looking at a lot of set items, budget MF gear, and superior melee / caster build choices. These are staples of the market and can be a great way to start building wealth in early Ladder reset

Let’s dive into our LD/LV gear, our set items. Keep in mind they can be worth a good bit if you can trade a complete set

Let’s go over items that work well for melee builds, but may take some time to trade after a Ladder reset

This is the last tier of MF gear and probably the lowest value of low value items. While you may be able to trade these items, they will not hold much value a few weeks after Ladder reset

Finally we arrive at the last rung of tradeable items – these are the edge cases that are just a step above Charsi Food but still No Demand / No Value. The great thing about these items: as a buyer this gear is cheap. The bad thing about these items: if you are selling, this gear is cheap. Keep them in your stash if you aren’t sure – you can always trash these when you run out of room

The very last section and we did not save the best for last. The ND/NV items are just not worth keeping. It is safe to sell these items to our favorite blacksmith – Charsi. That’s why we call these items Charsi Food.

You might say, Nokk my item is not Low Value! I agree, for your build you may love Kuko or Blackbog Sharp. That’s the great thing about D2R, there are nearly endless combinations of skills and items you can put together to make a fun character. This is just a reference for what the traders will pay in the Marketplace for your items – and trust me you can pick up a Kuko pretty cheap if you want to build that Holy Fire Ranger. 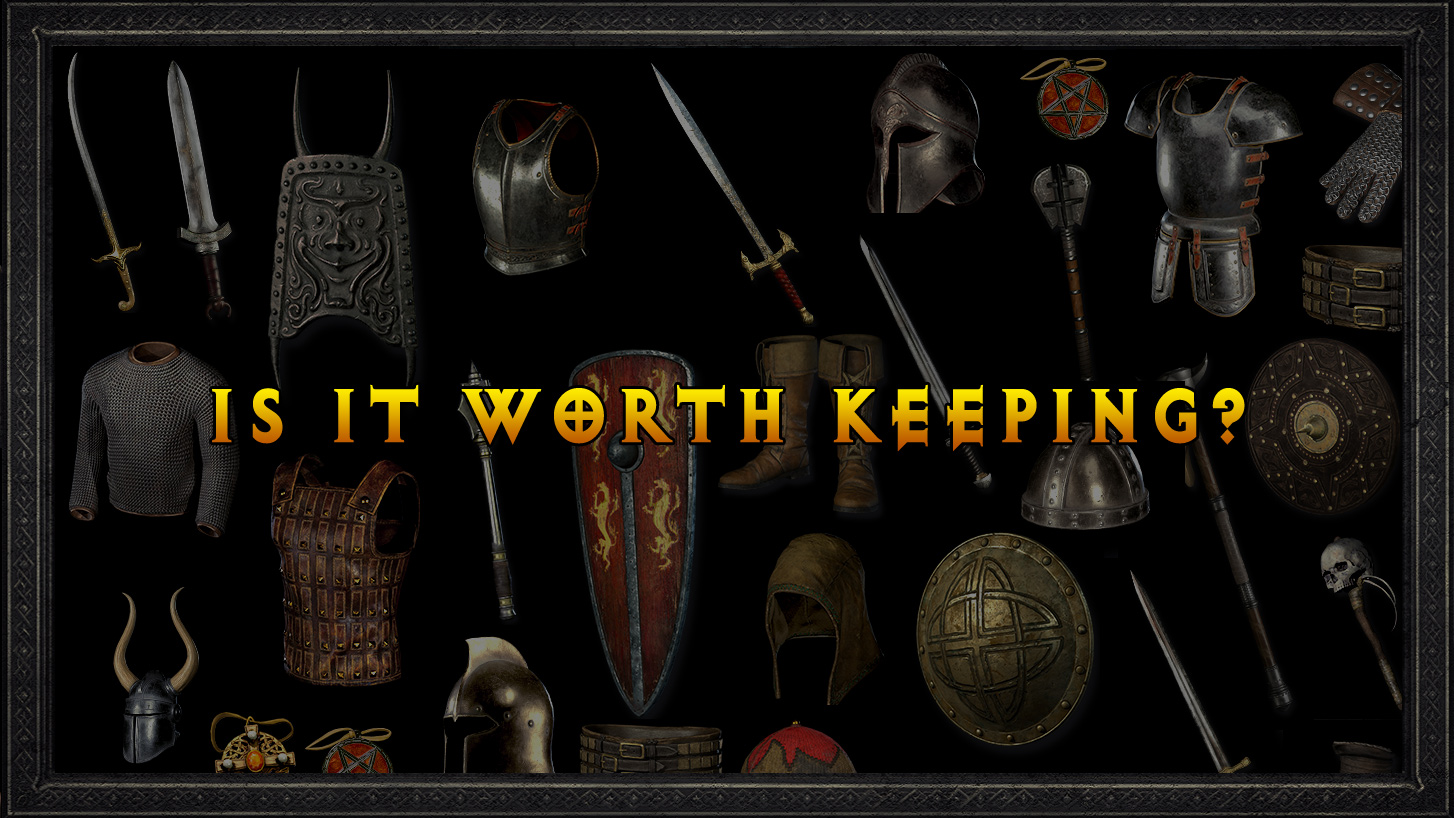 A guide to what Diablo 2 Resurrected items to keep. Detailing what items specifically should be kept for use or to sell.