Abbreviations and Acronyms used in this document: 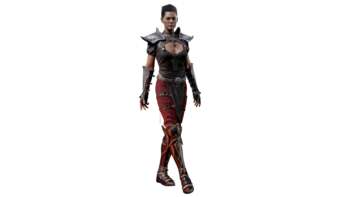 This equation needs to be worked left to right following the mathematical order of operations. Drop decimals when you get them from division.

Rather than try to explain each skill on it’s own, I’m going to just explain the damage formula. After that, I’ll move onto some skill and effect specifics. First and foremost, Your weapons ED will not affect any part of this equation. Physical weapon damage doesn’t matter when figuring kick damage.

(Str+dex-20)/4) and (str+dex-20)/3)
Indicate that for the base kick damage with no boots on str and dex have the same effect on damage. Dex, however, also boosts AR and defense. Thus, in 1.09 dex was the better choice for boosting your kick damage. This is no longer strictly true in 1.10, but the difference comes in a later part of the equation and I’ll leave the explanation for then.

(100+skill_bonus)
The skill_bonus spot is where the ED for Dtalon, TS, Dflight, and skills such as might get placed. ED on weapons does not affect kick damage at all and non-weapon ED is not counted into this total. IMPORTANT: If more than one of these sources of ED are present, they get added together and placed into this slot. Aura bonus is NOT added here. Also important: Dtail is not figured into the equation in this place, it’s actually figured using the result of the kick damage equation.

(100 + (str*StrBonus/100) + skill_bonus + non_weapon ED+Aura_bonus)
As you can see from the boot damage chart, all boots have a str bonus of 120. The skill_bonus slot is handled just as it was in the previous part of the equation. Non-weapon ED is also added to this portion of the equation. Aura_bonus is self-explanatory, it’s basically where the ED bonuses from stuff like Might, Concentration, and Fanatiscm is added. Here’s why str becomes a better choice than dex for raising kick damage in 1.10. Dex will still give AR and defense, but for pure damage increase str gets figured into the equation twice whereas dex only gets figured into the first part of the equation.

That’s the AoE damage of Dtail, to get the total damage shown on the character screen, add the damage from the kick itself and the AoE damage:

Understand that the bonus added from strength and ED from skills gets effectively reduced by this formula. Charging a level 20 TS (1440% ED) won’t up your damage by anywhere near 14 times once boot damage is counted into the equation.

Once again, weapon ED will not affect kicks. If str and dex are equal with both, you will have the same kick damage if you are using a cracked katar as you would if you’re using a cruel runic talon.

Non-weapon ED will have a much bigger impact on the damage of Dtalon and Dflight than it will with Dtail. Usually, TS is used in conjunction with Dtail and the ED from TS will vastly overshadow your non-weapon sources. With Dtalon, which isn’t normally used with TS, the ED added from the skill is much lower and you’ll see a bigger effect from non-weapon sources of ED. Dflight sits basically in the middle of the other two kicks on this issue. It will help Dflight more than Dtail, but less than Dtalon. In all cases, unless your build a variant or going all out for absolute maximum damage, non-weapon ED shouldn’t be placed ahead of other useful modifiers such as resists, stats and skills as you’ll have to make some sacrifices in those areas to obtain the ED from non-weapon sources.

I’ll mention again that Dtalon’s and Dflight’s damage bonuses are added into the kick damage equation, not multiplied by the result, as is Dtail’s. If you assign skill points so that all three have about the same listed ED, you’ll see on the character screen that Dtail lists much more actual damage due to this.

Effects and the kick skills

When using dual claws the effects of the first claw you equip will be carried, not the effects from both claws. I would suggest that you use a claw providing + skills, stats, etc. in the second position. This can get very confusing, as the game will default to the claw on the left side of the character screen if you unequip your first claw, then re-equip it. I strongly suggest that you always equip the claw whose effects you want to be transferred to your kicks first and put it in the slot on the left side of the character screen.

A change from version 1.09 is that kicks now will use the leech amounts off of your equipment and don’t require Cobra Strike to obtain life or mana leech.

Dtail carries these effects only to the release target, not in the area of effect.

Dtalon and Dflight carry elemental adders, but it is not reflected in the damage shown on the character screen.

The following effects are not carried by the kick skills:
 + Physical damage. This includes + Min damage, + Max damage, and plain + damage modifiers.
 Deadly Strike
 Critical strike
As of the writing of this, there is a problem with ED/Max damage jewels. They don’t apply the ED, just the Max damage. As kicks do not carry + Max damage modifiers, this means that an ED/Max damage jewel will not affect your kick damage at all even if the jewel is in a non-weapon socket.

Notes on the skills

TS is almost never used with talon except when talon is still at low levels. The ED added by TS is only applied to the first kick of the talon attack. Charging TS to three orbs and releasing with talon will deal less damage over time than attacking with talon alone once multiple kicks are involved.
Talon gets one additional kick every six skill levels (i.e. two kicks at level 6, three at level 12 etc.).

Talon is a great means for applying crushing blow and chance to cast on striking effects due to its multiple kicks done in a very short timeframe.
With a heavy investment in str and high damage boots talon’s damage can be very nice, but without such investment it tends to be rather low. This isn’t to say that a Dtalon build can’t obtain high damage, it just means that in order to get it you will have to focus your build around it.

When figuring damage with talon, remember to take into account the number of kicks. The damage equation gives the damage done by each kick, not all of them together.

TS is almost always used with Dtail. The TS bonus increases the physical damage done when releasing with Dtail and so greatly increases the damage available to be multiplied and converted.

Fists of Fire has a property in 1.10 that is worth mentioning in connection with Dtail. FoF now converts 3% of your physical damage to fire for every level of FoF. This conversion happens before Dtail figures its aoe damage and will reduce the physical damage done by the release thus reducing the damage done in Dtail’s aoe. FoF at level 34 and above will leave no damage done in the Dtail aoe. Using FoF and Dtail at the same time is really not recommended unless the aim is to kill a non-fire immune, physical immune enemy that Dtail itself cannot harm.

Dflight at first glance seems to provide far and away the most damage of the three kicks. Remember, however, that flight’s ED is added into the damage equation not multiplied. It also doesn’t get the boost from multiple kicks as Dtalon does. In the late game, the skill is going to be hurt by this. Here’s some approximate numbers for all three kick skills using 250 strength, 150 dexterity and myrmidon greaves to illustrate this.

I rounded the numbers to the nearest multiple of five for ease in calculation. As you can see, although the ED for Dflight is much higher than the other skills, the total damage it actually does is lower than either of the other skills.

Dflight’s casting delay has been reduced in 1.10 from 2 seconds to 1 second making it a little more pvm friendly.

Dflight has a few problems when it’s used as the main finisher for your build. First, it’s interruptible. It carries a casting hesitation before it teleports you and it can be interrupted at any point in the process. Second, it suffers from some nasty desynch issues. That basically means that it misses and misfires quite a bit. By misfiring I mean that you’ll hit the button and hear the sound Dflight makes when it teleports, but you’ll find your assassin still standing in the same place with no teleport and no kick having been done. That’s why this skill is generally left as a one pt wonder and used only for teleporting rather than as a main damage skill. This leads to a rather odd thing about Dflight. One of the most common uses for it in pvm is as a means of getting out of hot situations. Usually this means that you’re getting swamped and need to get out of the middle of a crowd. That’s exactly the type of situation in which Dflight is least effective and will show most blatantly the issues it has with missing and misfiring. Odd, but true. To avoid the issues with this skill, you need to look ahead and use it to get out of those situations before you are completely surrounded.

Dflight can be used as a main finisher, but running a build using it as such takes a lot of caution, tactics and skill with crowd control. Really not recommended for beginning players.

One large note for those wanting to use Dflight with a trapper or hybrid build. Your traps will disappear if you Dflight outside of their firing range. That’s the range that a bolt will fly when fired by the trap, not the range from the trap that a target has to be for the trap to fire.

This will be a very brief overview as the topic of attack speeds is worthy of a guide all it’s own.

Kicks have a base fpa of 12. The EIAS (Effective Increased Attack Speed) formula is:

If you are dual wielding claws, this gets a slightly complicated. Your WSM will be the average of the WSMs of both claws. However, only the ias on your main weapon (the one you equip first or the one on the left-hand side of the character screen if you’ve unequiped and re-equiped your first claw) will count towards your ias total. IAS on your off-hand weapon will not affect your kick speed. I’ll repeat something I stated in the effects portion of this guide: I strongly suggest that you always equip the claw whose effects (and IAS) you want to be transferred to your kicks first and put it in the slot on the left side of the character screen.

Ias in this equation is the total of all ias on your gear, excluding your off-hand weapon if you’re dual wielding claws. Weapon ias has no different effect than ias on gloves, helm or armor.

Skill_ias in this equation is the attack speed increase added by BoS or skills such as Fanatacism.

One other note on kick speed is that Dflight’s actual speed may be 7 frames with your gear and skills, but it still carries a casting hesitation before and after the kick so, ias and bos really don’t help it much.

For further information on what your kicking speed would be given your gear and skill levels, I’ll refer you to this calculator:

It’s in Excel 97 format. If you don’t have Excel, there’s a link to a free downloadable viewer from Microsoft on the page.