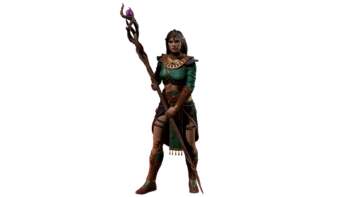 After hearing all the comments from SP’ers and BNET’ers alike, about how drastically and harshly the sorceress has been hit with the nerf stick coming 1.10, and also hearing so many questions about building a reliable mf’er in 1.10, I’ve decided to write up this little guide, based on my own experience with my level 84 FO/Meteor sorceress , Faith.

A. So what is our goal here?

We are trying to build a sorceress which is both reliable in 1.10 Hell, and which can also easily and safely run Hell Meph and Pindle for items, considering they’re the two easiest targets for a sorc.

B. Why Frozen Orb?

Frozen Orb is rather simple actually. It’s definitely the easiest to aim, most area covering, most damaging per casting and basically the most effective sorceress skill in the new patch. The way the skill works is that you cast that globe of ice which continues to release these shards of ice all over, each of the shards doing the damage that is presented in the character screen. Meph has a relatively low resistance to cold in Hell, and even though Pindle gets random immunities in Hell, he very seldom gets cold immunity.

Seeing that you’ll encounter many monsters which have cold immunity in Hell, you cannot rely on only one element to lead you to victory. I chose to go with Meteor because it has many helpful synergies and because it reaches a very respectable damage later on in the game. Of course, the fact that both these timed spells have the exact same timer and cannot be used in synchronization, but that surely is not a major problem, I will explain why later, in the strategy section.

What, two trees only?

This ain’t 1.09 folks, and tri-elemental sorceress just ain’t viable anymore. We’ll need all the synergies we can get, and for that we’ll need to only focus on two trees. We will of course use utility skills from the lightning tree, but will not use Thunder Storm for example, for the reason mentioned above.

So which skills do I use?

I decided to go with base dexterity and not to pay any attention to blocking because I think those points are much more useful for vitality and energy, since we’ll be spamming quite some spells, even if they’re timed. I certainly do not regret not having maxed blocking, and you’ll see that you don’t need maxed blocking nor Energy Shield in order to survive in 1.10 Hell, just a lot of hit points.

I may have exaggerated a bit with the energy, but then again- I don’t see where would I have placed them instead, and I really like having 1k of mana, thus allowing me to cut down on my + x% to mana, and get some more MF%.

How about some strategy tips?

First thing we’ll need to do is start investing points in Fire Ball, since it’s both very powerful at the beginning, and also because it is a synergized skill of Meteor, thus adding to it’s damage. I suggest investing into Fire Ball from level 12 (when you can use FB) to level 24 (when you can use Meteor). You won’t be wasting any skill points doing so and will have a very handy killing spell for the early stages.

Once you reach level 24, I suggest placing points into Meteor until level 30, even if Meteor will seem a lot less useful than FB at that level, and you will still be using FB exclusively.

Once you reach level 30, it’s time to start maxing FO. Nothing else can be more useful in those levels than FO, and I suggest maxing it ASAP. You can add a point into Cold Mastery if you must, but it really is alot less helpful than another point in FO itself, since monsters in normal won’t have much (if any) resistance to cold anyway.

As soon as FO is maxed, it’s time to start maxing Cold Mastery. Yes, your Meteor is still at a low level, but almost during all of NM you will mow through everything using FO alone, and CM will increase your damage output using it, so go on and max it as well!

After FO and CM are maxed you can start working on maxing Meteor first, then FM/FB later on, even though they don’t need to be maxed in order for Meteor to be able to deal with most of the CI monsters later on.

I suggest starting to run NM Mpeh as soon as you get there for most of the very useful unique/set exceptionals, including some sweet MF equipment.

As soon as you’ve reached Hell Meph, you’ve reached MF’ing heaven The guy is very easy to deal with by first using SF on him to lower his life to half, then using FO to finish him off.
I didn’t use the trick moat while running Meph, but rather sidestepped his attacks and spammed FO. Very safe, very profitable.

When you feel you’re done with Meph, or that you want to get a hold on those sweeter elite uniques (WF, GF etc.), it’s time to move on to farming Pindle.
At first I used to die quite frequently to him due to his and his minions’ fierce charge attack, but once I realized how much safer it is to use my merc as well when running him, I didn’t even die to him anymore, not unless he spawned with some really nasty mods, such as a CI and Fanaticism

Which merc do I use?

There is only one answer here, as Hazade (my merc) would say- Act2 Defiance (defensive) merc all the way baby! The aura won’t do much for your sorceress herself, but it will help keep your merc alive, and you will need your merc to tank for you in Hell, trust me.
The most important mods to have for your merc’s equipment are damage reduction, life leech and resists, in that order.

Here is some info on my own little sorc:

She is wearing the full Tal Rasha’s Set, the armor and helm both being socketed with perfect topazes, giving me a total of 363% MF with all my gear and charms on. One SOJ, one Nagelring and a Rhyme’d shield. Most of my charms are small MF ones, as well as a few +life ones and +resist all ones. My precious is a 30% MF Gheed’s Fortune ^^

My resists in Hell are as the following:

I would like to thank Nightfish for his kind and generous help he’s given me with this sorceress, items and information alike.

That’s it, not a real credits sort of guy here. I hope this guide is somewhat helpful and easy to read, considering it’s my first guide ever, and I also will be glad to hear any comments or questions on this guide