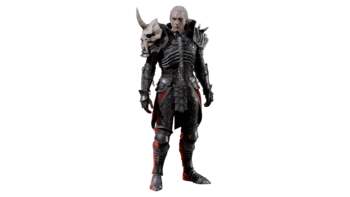 This build is unique because it allows you to play as a Meleemancer and Summoner while utilizing auras found on the new Rune Word items to maximize the killing power of both you and your minions. It is my favorite build on Diablo II so far and I can assure you that playing this build does not become a routine like many of the other builds. No more hiding behind your minions. Itâ€™s time to join them in battle.

Put 1 point into all of the Curses. The +Skills you get from items will boost these curses considerably. I will focus on a few that are more commonly used than others.

The Commandomancer uses auras activated by items that he and his mercenary wear. Here is a list of items and the auras they provide.

Sorry, but I am only giving you one choice here: Act II Nightmare Offensive
This mercenary provides the Might aura, which will increase the physical damage of you and your minions.

When in need, you can convert the Commandomancer into a Magic Find Summoner. The skeletons and mercenary will tear Mephisto apart in seconds. For faster results you may shape shift into a bear and smack Mephisto around yourself. Here is a brief overview.

1) Take the red portal in Act V to Pindleâ€™s â€œgarden.â€ There are lots of corpses on the ground. Raise as many skeletons as you desire. Kill Pindle. He probably wonâ€™t drop anything good.

2) Take the Waypoint to Durance of Hate Level 2. Teleport or run to Mephisto. Cast Amplify Damage on him and kill him.

3) From here you can go to any of these popular MF places:

TheKbob: For the idea of the Commandomancer, and the great guide which inspired me to make one.

Necrochild313: For disproving the PD bug.

Cotton: For being my Dclone hunting buddy.

Corax: For Mercenary Gear additions and his 1337 OT SPAM skills.

You: For reading my guide.