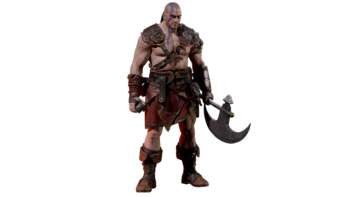 The Hellfire Barbarian has a skill called Rage. This skill is a short term buff that boosts his strength, vitality, and dexterity for 12 seconds. After that time he enters a 12 second lethargy phase, when those same attributes are reduced by the same amount. Afterwards his vitality is supposed to suffer a permanent penalty, however due to a bug in Hellfire, clicking on any item in his inventory will reset the vitality loss.

Barbarians get a special bonus to their defense, with it increasing with their character level.

The Warrior, Rogue, Sorcerer, and Bard all derive their defense from “Dex/5 + AC (items)” without any bonus for Clvl. (Monks gain nothing with Clvl, but get bonuses for going naked or in light armor, and suffer penalties for wearing medium and heavy armor.)

The Barbarian plays differently than any of the other characters in the game. He’s not that unlike the Monk, in some ways. Both are at their best when using a two handed weapon, since they can hit three targets at once. Both deal damage, and swing quite quickly. The Barbarian is very different though, in that he has vastly higher hit points than the average Monk, much higher damage, and far less magic. Barbarians have zero magic or mana to begin with, and only gain the ability to read books or cast spells from equipment that boosts those stats. They do get one mana per magic point, so a +20 zodiac ring would give them 20 mana (and 50 hit points, with the +2.5 per vit bonus).

Much like the Monk, this is what Barbarians do best. Their damage can be enormous; to compare to a warrior, the highest damage one-handed sword is a 6-15 Bastard sword. The Great Axe does 12-30, double the damage of a Bastard Sword, and when a Barbarian gets a King’s Axe Great Axe, fastest hit, and uses his inherent ability to hit up to three targets at once, he becomes an unmovable force on melee monster levels, capable of dealing up to 6x the damage of a Warrior with every swing.

Barbarians can use a sword/shield, or even a maul/shield. They even do higher damage than a Warrior in that mode, since Barbarians can wield two-handed swords and blunts in one hand. They are not meant to use shields though, and get only 50% of the Armor Class from equipped shields. Plus they can only hit one target at a time with a sword, losing their tremendous triple-hitting axe ability.

Barbarians do not get any magic from their attributes, and don’t even gain mana from leveling up. All of their magic and mana must come from equipment, and it can be a struggle for a new Barbarian to survive with nothing but healing scrolls and healing potions. Finding a book of healing won’t end your troubles either, since the cost of healing scales up with the character’s hit points, and Barbarians have a lot of hit points. It’s not uncommon for a Barbarian to level well into the 30s before he has enough +mana equipment to actually cast the healing spell. Like all spells, Healing costs less mana at higher levels, so read all the books you can.

Town Portal does not grow more expensive as the Barbarian levels up, but it’s some time before a Barbarian has enough magic to read a book, or enough mana to cast it. Carrying a town portal scroll (or 3) is mandatory for new Barbarians, for quite some time.

Eventually, higher level Barbarians should be able to accumulate enough +magic equipment to read a variety of spellbooks. Using some magic is very helpful. Being able to heal is certainly nice, and stone curse and teleport help greatly in the hell levels when witches and mages are encountered. Be sure you only buy full mana potions; partials will do almost nothing for the Barbarian.

Not a weapon the Barbarian is very skilled with. He can fumble at one in desperation at chasing monsters that flee, but it’s not a pretty picture.

Barbarians can use spells as other characters do, but barring some very specialized equipment they need to be quite stingy with their mana, since it runs out so quickly. Using offensive spells is almost out of the question, but Healing, Barrier, Stone Curse, and Teleport are all very useful.

Even more than the Warrior, life leech is of enormous help to the Barbarian. His nonexistent magic makes casting Healing an expensive proposition, and his high damage and huge life pool allow him to take a lot of damage, and refill his life very quickly when he lands some hits of his own. Using an axe of speed or haste is highly recommended, which means life leech should be obtained from a helm. (Life and mana leech only occur as suffixes on magical weapons.)

This is easy in single player, thanks to The Undead Crown that the Skeleton King drops every game. In multiplayer Diablo, the only way to get life leech, other than from a weapon, is from the ultra-rare Helm of Sprits. Good luck finding one of those.

Barbarians can achieve very high defense even without a shield, since they get a bonus to their Armor Class with every level up. They also gain 1% resistance to all three types of magic with each level up, which means a medium or high level Barbarian only needs one decent resistance item, an Obsidian ring/amulet/helm/etc, to be all but maxed out on resistance.