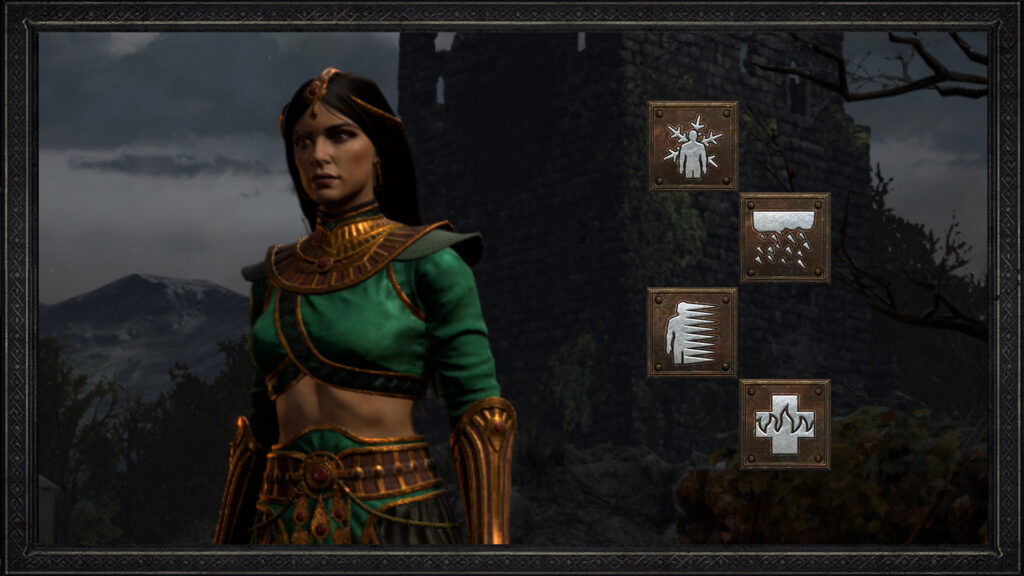 This Diablo 2 Blizzard Sorceress Guide is designed for a PvE Softcore Sorceress.

In general, the damage of Blizzard is enough to kill anything not cold-immune. So here’s how to tackle those cold immunities.

How to deal with cold-immunes

Luckily for us there are no cold-immunes that can’t be dealt with properly. The key to this build is to enable farming Mephisto Hell and later Pindleskin/Ancient Tunnels (and very later, if you want to, the Cow Level).
Just teleport away from any cold-immune monster unless it’s unskippable.

The only non skippable cold-immunes for that are:

The Travincal High Council, most of them aren’t cold-immune, but one is 100%. My suggestion is that you farm Ancient Tunnels until you get some decent mercenary weapon (even unupped Hone Sundan will do), then kill everything you can and static the last one. If your mercenary isn’t that strong, you can cast Telekinesis on the monster to stun him, so eventually, your mercenary kills him.

If you glacial spike his minions and cast blizzard upon them when he is alone, just telekinesis and watch your mercenary kill him (assuming you have a decent weapon for him), it may be slow (due to Decrepify), but not difficult.

To unlock Pindleskin you have to free Anya, the fastest way with a Blizzard Sorceress is to lure those Snow Yeti away from her with good teleports and talk to Anya +townportal and free her with the potion from Malah. Since the Snow Yeti have a stun attack, there’s no way your mercenary can defeat them.

One of them (the leap attacker) is always cold immune, but with some elite beatstick for the mercenary, he shouldn’t be a problem, just takes longer. Keep your merc alive at all costs, otherwise, you won’t beat him, or at least it takes ages. My merc setup was unique Ogre Axe (Hel’ed+noneth), Vampire Gaze (Wormskull/Undead Crown should be good as well) and Goldskin (for the 35 @).

Wave 2 in the Throneroom

Just blast those mummies with your Blizzard and let your mercenary kill all the mages. If you beat the Ancients alone, this one should be easy. You can position yourself at the stairs, so your mercenary doesn’t get Decrepify on him.

You don’t need any Respec, in my opinion, just patience. Just pump Cold Mastery (imo 20 if no great gear), Blizzard and its synergies, and put a point into Static, Teleport, and Warmth and later a point into Firemastery (depending on the switch orb) for the cold immune ancient. Max Blizzard as soon as possible, but put one point into CM if available.

1. What to aim for untwinked

max resistances (or close)
good faster cast breakpoint (63 or 105)
some +skills, even tho Blizzard is strong without any
some magic find

Items with magic find include:

For Hell, you should have at least this:

If you either play directly on the Ladder, or have Ladder runewords enabled (D2R), give your mercenary Insight as soon as possible, make yourself a ‘Spirit’-weapon and later then a ‘Spirit’-shield (requires Monarch, which only drops in Hell, afaik). Other than that all items previously mentioned are good choices for Ladder too.

The most bang for the buck that you can get in Singleplayer in terms of runes would be Lower Kurast runs.
You don’t really need anything for it except 105% faster cast, fire/lightning resistances help in case of trap-chests. This should be done on players 7.

And for anything but Cham+, Lower Kurast has an edge, even with very good gear, see this comparison: [Guide] Gripphon’s LK vs Travincal vs Cows – rune finding guide

On Battlenet you can’t really do Lower Kurast, because it will be players1 and the map always changes, so either visit the Cow Level (but don’t kill the king!) and or visit Travincal.

Since you need very good gear for Travincal, I can’t recommend it at the start of the ladder, but the Cowlevel is great, since you don’t need anything to kill the cows, just glacial spike to keep the merc alive.

In Battlenet a good setup for Cow running might be:

You could of course use your Death Fathom, but as said for 1player games almost anything goes.

On the low to average side you have hell Mephisto and Pindleskin, on both targets more mf usually means better.

Mephisto with the moat trick doesn’t even need a mercenary, but since he will probably die you shouldn’t mix Pindle + Mephisto until your mercenary can take a few hits of him.

At the mid budget side you have Ancient Tunnels with a Full Talrasha set with all available sockets filled with Ist(weapon) or perfect Topaz.

Rest of the slots will be then:

At the high budget side you have the following (credits to Dbrunski125 on Youtube):

Use the moattrick if you are undergeared, you teleport to Mephisto to get his aggro, then teleport over the river and cast blizzard upon him.
If you have good gear then just let your mercenary tank him while you cast blizzard. (If not over players 1, don’t bother to static him)

Cast Glacial Spike on his troops and then blizzard, should be really easy at least with mouse+keyboard.

Actually there are 2 reasons to do Travincal runs, one the high runes, and two gold to gamble stuff. I only covered rune finding.
The setup for gold finding is very different: 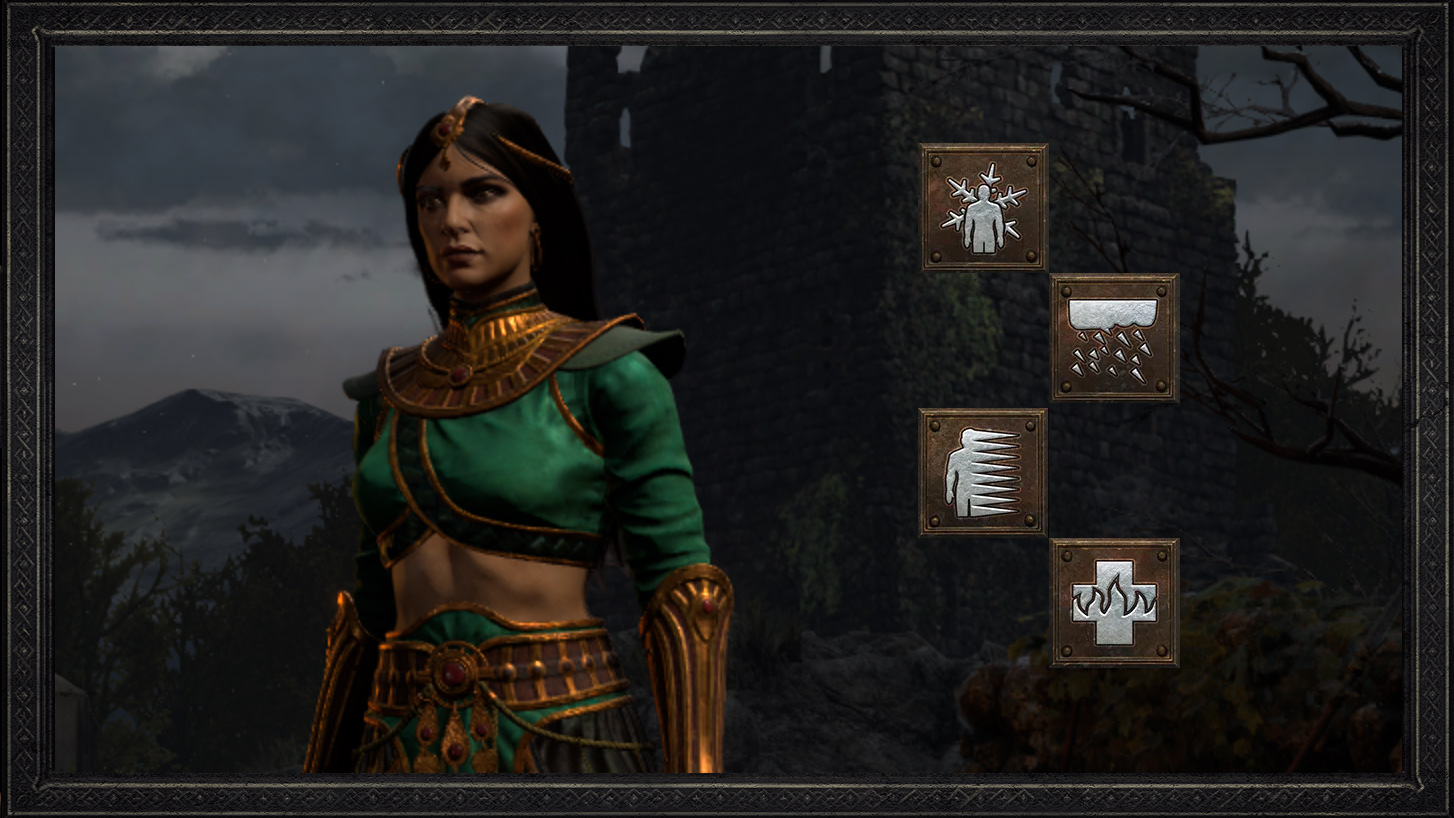 A guide to the Diablo 2 Blizzard Sorceress Guide by d2lover.