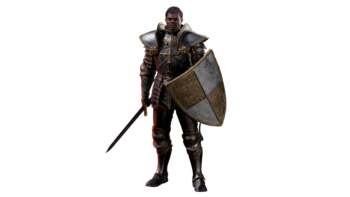 As you may know a V/T Paladin uses the Smite and Fist of the Heavens skills, and there are many different variants and ideas on stat and skill allocation. This guide is my outlook on 1.10 PvP and PvM builds featuring the V/T; I hope it helps others use this variant to their own advantage.

Str: 118 Max will be the most ever needed after gear. Adding more to this will add flexibiltiy, but you will be suprised just what you can do with this little str.

Dex: 110 Max for PvP or 135 Max for PvM after all gear. These numbers take into account final use of Holy Shield and gear. You will have 75% Block rate and ability to use just about every 1 handed weapon in the game. Adding more will only increase your AR, which would be a waste.

Vit: This is the area to put as much points as possible into. Paladins will gain 3 life per point of vitality. The low dex and str reqs on this build allow for you to have 1500+ Hp in late nightmare difficulty.

Energy: Nothing. Keep this at base. There is no need for any more ever.

This build easily can have 1800hp By level 80, and depending on some gear choices can see as much as 2100+. This is where you will be able to gain an advantage In PvM and PvP. Since under normal circumstances, smite or foh never leeches health, so having as much as possible takes precedence over other high str/dex required weapons.

The rest are used for pre-requisite skills. The Combat skills used are high, but the auras seem low; this will be explained in more depth. Having combat skill charms is reccommended. After all gear can be worn, you can expect combat skills in the mid to high 30’s, and auras in the mid 20′. Salvation is a salvation. Not having this skill would make it next to impossible to get through certain parts of the game without a party.

With these stats and skills you can deal quite high straight physical damage and have a ranged attack that can toast anything running or standing, all while you have 2k+ Hp and max resists. It also shines in PvM in parties or solo throughout all parts of hell difficulty.

Helmets: Shako without any reservation. This helm gives over 100 life, 100 mana, and skills and stats at higher levels. There is no better helm for this build for PvP and most of PvM. If you are a serious dueler I reccommend a Ber or Jah socketed Shako. Also quite efficient is Um or a resist jewel. For pure PvM Pallys, I reccommend Delirum. Though expensive, the regular bursts of confuse ensure that the enemies fight each other and leave you alone.

Weapon: Silence phase blade for smite. This weapon makes the fastest BP for smite with 20+ Fanat, which you will have. It has +75 Resists/+2 Skills/20% Fhr for PvP, and for PvM has Blindness and causes monster to flee. On a switch for FoH I use Wizzie. Mine is socketed with 7% Fhr/10% dmg to mana jewel. A resist all jewel would be good as well. I use this for the FCR and resists as well as the great mana bonus. It works great for the switch. For PvM You may want to look at a Crecent Moon phase blade or a Priests War scepter of Quickness. Both are great alternatives to Silence, but lack resists. Crecent Moon phase blade quickly acts as mass crowd hit point reduction with its CTC Static Field.

Shield: Exile Sacred Targe or other elite pally shield. I have had great success with the Exile, both in PvP and in PvM. Call it cheap, but the lifetap that it casts is almost always necessary. For Pubbie dueling, you have to prepare to be attacked by 2 or more characters at one time. If not an Exile for many reasons, a nice Ryme Sacred Targe or any +2 skills rare could be quite impressive. I stick with sacred targes b/c they have the best overall block rate. On a switch for FoH I have an HoZ socketed with Ort. The +4 to combat skills makes it the best caster shield for a pally. +50 All resists, and an additional +35% light resists make for a great FoH buster in PvP. A resist all jewel or Um is another great choice.

Armor: Guardian Angel. This will make your pallys life last a good deal longer. With the bonuses from other gear, you will have at least 90% all resists in hell. It also has a nice +1 Pally skills, and a 20%+ Chance to block. I socketed mine with Ber Rune, but Um or Jah would be a great alternative for PvP or PvM. At 118 Str req, this is the highest str req item that you will use. As an alternate PvP or PvM I use an Enigma Wire Fleece. The teleport makes for fast leveling, and Mf’ing. It works great for quick Shenk/eldrich/Threshsocket/Pindle runs. I don’t use much for PvP, so I can’t see it as necessary.

Rings: Ravenfrost. Highest dex available. The more dex on the ring, the more life you have later on. As a second ring, look for any FCR ring with good mods….any str or dex or resists are the best.

Ammulet: Maras or a rare pally ammy. +2 Skills and up to +30% resists makes for a hard to beat combo. If You can find a +2 Pally skill ammy with decent other mods like high str or dex mods and resists, it may be a better option.

Belt: Thundergods Vigor. The + Str and Vit as well as the lightening absorb make for a great survivor belt. Bad Mannered or not for PvP, you won’t be able to absorb a full synergy FoH, but it sure reduces it to a managable amount in the 75-100 range, and any other lightening casting character like sins usually will heal you. Gloams will heal you. Fear nothing electrical.

Gloves: This is the only part of the gear that I use that may interchange from time to time. I use Hellmouths for the fire absorb anytime any suspected fire sorc in the game. With their terrible one hit killer fire spells, resists and absorbs are a must. It may deal a lot less damage, but may not entirely absorb the full attack. for everything else including PvM I use Magefists for the FCR and mana regen.

Boots: Goreriders. The chance for a crushing blow or open wounds are nice mods to have for all around use. My only other choice would be War Travelers for the str and vit mod. Loss of open wounds was too much for me to turn to these boots, but others more interested in a more FoH approach to play may prefer War Travs.

Charms: I use an assortment of 8 Combat skill Grands, 2 Offensive aura Grands, and 1 +14 All resists grand and 10x 20 Life small charms. Another good choice for charms is mass resists smalls and larges.

Merc: Yes merc decision was quite important for PvM play. I went with the act 5 barbs for a few reasons. One of which is the knockback/stun attack they deal as well as their massive life and resists. I equipped mine with an etheral Crecent Moon PB, Shaftstop and Delirum. He is the whole reason I don’t need a party for any questing. He cast Static Field, Confuse, and level 17 Chain Lightning, though the -35% enemy lightning resist only works for him.

Another nice bonus to my gear was that none of it has a level req over 67. This allows for full equip in late Nightmare difficulty with ease.

After level 80, my damage was quite acceptable to me, and I began maxing Holy Shield. The overall defense bonus as well as the Smite bonus make it the final skill to max for me. If you notice none of my other skills/auras are maxed, but if you really consider the overall build, the only characters that will be dealing damage to you are melee chars, the feared bone necro, and the wind druid. Two out of the three are unavoidable and require a bit of skill to defeat. Using Enigma makes it a good deal easier, as a teleport behind them into a charge usually is enough to kill them after a few hits.

After final gear choices at level 80 give me the following stats for PvP
34 Smite
31 Holy Shield
35 FoH
22 Conviction (-130 resist is fine by me considering the Pvp penality will make -150% damage much smaller than is worth 3 more skill points.
26 Fanaticism

Overall I have 90%+ resist in Hell and a Smite dmg of 1554-2199, and FoH of 1658-1712 w/-130% resists. My hp have recently surpassed the 1800 barrier. 25k-30k Defense is quite easy to get. I only have 18% DR, but with the number of hit points I have, I’ve not died yet in hell PvM, and died very little in PvP. A Ber socketed in a Shako would greatly increase my longevity. I’ve found Mf’ing Pindle and the whole Act 5 Crew to be easy. Pindle and his minions take around 1-2 FoH bolts to stun everyone with holy bolt, than a charge into the pack with smite. Stacking lightning resists makes for less dmg versus FoH Pallys in dueling, but for PvM the gear usually gives enough resists with a switch to Salvation for the extreme tough spots.

Skills after level 75 become a matter of choice. I have for most PvP play +16 to all combat skills, which makes charge something else to use for PvP. For PvM Holy Bolt can be helpful considering the huge damage to undead; it’s worth a hotkey for certain places. Some like using Holy Freeze for all types of play or Salvation for mana/hp regeneration. I did not use Salvation at all on my final build only to save skill points. For PvM it’s a great aura to have. Otherwise, all your hp and mana needs are fulfilled by potion chugging.

Smite is my main attack. If I see any undead of any kind, I will switch to FoH + Conviction and start blasting. There are a few reasons for this behavior, the main one being Iron Maiden. The other is that FoH cast holy bolt which seeks and stuns undead. Dueling is based around Smite until the offender makes for a ranged attack or runs. This is when its time for FoH in PvP. Learning when to use which attack is a fun journey, and I reccommed trying different combos. Using all the skills at your disposal will make you a tank and a party leader.

However you finalize it, its an awesome build with great potential for hideous PvP damage and great for Mf Runs in Hell, or just questing to try a fun build. As long as your resists are maxed, and you have high amounts of life, this is a blast and an easy to use pally.