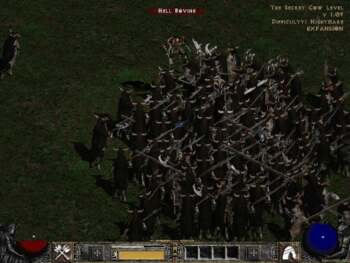 How to reach the Secret Cow Level

You must finish the game first (Kill Diablo in D2, Kill Baal in D2X), and then go back to Act I on the same difficulty level, and execute the cube recipe of Wirt’s Leg + a Town Portal Tome, while your character is standing in the Rogue Encampment. You do not need to carry around Wirt’s Leg forever; just go back to Tristram any time and click his corpse to get a new one.

As for the Cow Level itself, it’s about what you would expect. Cows and more cows, called Hell Bovines, appear in huge, almost never-ending herds. By far the most tightly-packed monsters you see anywhere in the game can be found in the Cow Level. Every cow looks the same, there is no variation in coloration or weaponry at all. They all have massive polearms, and do quite heavy damage when they strike you with their very fast attacks.

The level is all on the surface, there aren’t any sub levels or dungeon or cave areas, but there is a main wooden stockade sort of area, with walls just like those in the Rogue Encampment. It is square in shape, with openings on all sides, and a number of dead Rogues lying around, and others tied to stakes, as you often see them in Act I. It’s not a real good place to fight in, since the approaching cows can easily fill every exit and you do not want to be cornered by them. Being cornered or too surrounded will get you scenes like this, and as you can imagine, body-retrieval can be a challenge.

Somewhere inside or just outside of the “fort” as it’s called, you’ll find the Cow King. He is always Lightning Enchanted, and should be avoided if you wish to retain the ability to open the portal to the level.

You can open the Red Portal to the cow level as many times as you like, providing you don’t get credit for killing the king. Credit is given if you kill him yourself, or he dies at the hand of another player who has never killed him before, while you are in the Cow Level. Being partied or not has no effect on the credit for the quest, it only matters who actually gets the last hit on King.

The boss monster for the level is The Cow King, and he’s there every game, always spawning somewhere inside or very near the wooden fort. He has minions as well, just like any random boss in the game.

You can see full stats for the Cow King here. He doesn’t differ in appearance from the other cows in any way; no crown or different coloration or longer horns, though on hell he often is Aura Enchanted, so you’ll spot him by that. There are often random Cow Bosses and champions scattered throughout the area, and with them all identical in appearance it’s hard to tell if a monster is the king or not until you kill some to clear out the mob. The King is always Lightning Enchanted, so that’s one way to tell him immediately.

Prior to v1.08 the Cow King was a guaranteed special drop, like the Act Bosses, though only two items. Uniques and Sets were almost guaranteed from him with some Magic Find. In v1.09 he was toned down a bit, but he still has the ability to drop a random array of up to five magical, rare, set, and/or unique class items as well as a half-dozen stamina potions (milk anyone?). On Hell his Treasure Class is much lower than that of the normal cows, so while he will never drop top level items, he can drop quite a few low level Elite items such as Bramble Mitts, Dusk Shrouds, Shakos, etc.

The Cow Level requires some unusual strategy. First of all, the only way in is through the red portal, which does not always spawn in a safe location. It’s a good idea to get away from it as quickly as possible, since if it gets swarmed and you leave the level through it, or die, you will not be able to return safely.

The Hell Bovines are very slow of foot, but they hit hard and have fairly rapid attacks, so caution must be used when tanking them. Their greatest strength comes from their numbers, simply because 10 cows swinging at your character, at once, is a bad situation for almost anyone.

The best characters for the cow level have ranged attacks that can strike multiple targets at the same time. Javazons might as well have been designed specifically to excel in the Cow Level, thanks to Lightning Fury, which is more effective the more targets there are in range. Other highly useful skills against the Cows include Nova, Corpse Explosion, Multishot, and Death Sentry. Anything that hits many targets per use will come into its own against the cows.

The basic strategy for the level varies a lot. If your character has a powerful area attack, you want to run around with a purpose, getting as many cows following you as possible. This is known as “herding”. Run around the mobs, “knitting” them into bigger packs, so you can attack huge mobs at once. Characters with less powerful skills will probably want to take on the cows a few at a time, and should advance slowly and carefully.

The difficulty in the Cow Level comes from the sheer numbers. The level is set outdoors, and looks like anywhere else outdoors in Act One. A few trees and some rocks and chests scattered about, but no houses or anything else that would give you a bottleneck where you could take on the cows just a few at a time.

The hardest part is when you first arrive: The Red Portal appears in some random location, usually against one of the outer stone walls. Sometimes you are in a safe spot, but other times there will be cows galore right away. As many as 30 or 40 coming at you immediately, from all directions. You need to try and kill them without moving too far in any direction, since if you do you’ll get into sight of more cows, and another 20 or 30 will move in. The cows can see farther than the edges of your visible screen, so get used to them moving deliberately towards you, “moo-moo’ing” all the time.

An alternative is to run for it. You can dodge through and around the clumps of cows pretty easily, since they all move at zombie-speed. Usually some corners of the level will be devoid of cows, and you can reach a somewhat clear spot and drop a town portal, or fight there and run again when they threaten to swarm you.

It’s always a good idea to not die near the Red Portal, and ideally to have a blue and the red available, so you can always get back there without cows hitting you the instant you appear. Retreating through the Red Portal, or a Town Portal, will probably be required a number of times, either to get a mana refill or more red potions, or arrows/javelins if you are using a projectile attack.

The best equipment for the cow level is Magic Find gear, or else defensive stuff. Especially useful is a high defense, and equipment with -% damage. Shaftstop, Rockstopper, Stormshield, etc. If you can cut the physical damage you take, you’ll be much more likely to survive attacks. A high blocking percentage is very useful as well, as are Dodge and Evade for Amazons.

The fun of the level for items is that there are such huge numbers of cows that doing the Cow Level gets you more kills in a small area than you will ever get anywhere else in the game.

Very few things changed for the Expansion. A character must kill Baal to be eligible to enter, rather than Diablo, but that’s about it. The value and difficulty of the cows has fluctuated from patch to patch. In v1.09 the Cow Level was among the most profitable areas in the game and was the most popular since it was so easy to rack up huge experience quickly. It became less valuable in v1.10 when the experience given by the cows was cut and their item dropping lowered.