Your worst item that you still keep!

I gonna start with this one:

You can and are encouraged to post items with higher reqs
Reactions: zemaj, saracen85 and D2DC

This one is heads-and-shoulders above the plain +2% charms I was using..

Code:
You need to take desperate measures to get 1.07 MF!
Reactions: zemaj, saracen85, Babyhell and 1 other person

Do you use this for cheating uniques or rare jewels?

Those (2%) were mostly used earlier on, for hitting the 300%-whatever break point for set drops. Getting to the 556% took a whole lot of upgrading to 3% and 4%..
Reactions: d2lover

Hehe, I keep all those 3%frw small charms in 1.07 for rackrunning.
But I already have more than is efficient. (I keep 4*4 free+cube to pick up goodies )

Code:
They don't really affect the new character's combat abilities. However, they improve my ability to better view the sweet artwork in act 1's caves and dungeons. Also, I'm pretty sure they help wake up more monsters farther away to come attack the new hero, so that he or she can get early experience just a tad faster.
Reactions: zemaj, Miron, saracen85 and 4 others

Ethereal rare gloves without repair mod, especially when they had quite some nice stats. However I clean from time to time ;-)
Reactions: saracen85 and d2lover

I'm not entirely sure where this came from.

It might have been one of Ormus' quest reward rings. I mean, who hasn't had this exchange with themselves upon returning the Gidbinn to him?

"This magic ring does me no good"
I open my inventory and take a look at what he gave me
"Well shit, that's because it sucks!"

Only thing that makes these special in any way is thier source, Hell Difficulty Baal. Unfortunately, as simple items they have no ilvl, and the pertinent screenshots have been lost in the mists of time, so really only way I know that they are is because I keep them in thier own stash, as a memorial to the "best" drops I ever got from Baal...

Have to use ATMA since GoMule doesn't list potions, and in 1.11, since its ATMA, but I do not believe the pertinent algorithm have been changed since then. Also at +0%mf, since I have changed that chars gear around several times since and have no idea what it was at time of drop. That just means comparison is actually far worse, since +%mf doesn't effect potion drops...

Yes, I am simultaneously annoyed and amused by these.
Reactions: Luhkoh, Swamigoon, saracen85 and 2 others

PB of self-repair, just for kicks.

I'm sure I had PB of Ages dropped for me a couple of times. Surprised I didn't keep any since I can't find it in my stashes.
Reactions: zemaj, d2lover and Swamigoon 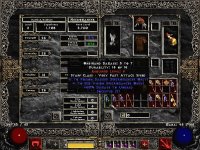 Uh .. I remebered this thread while theorycrafting my 3fpa wolfbarb. Then I stumbled upon this in one of my socketables stash.


Code:
Plot twist - he will actually use this as his endgame equipment.
Reactions: zemaj

Code:
When I ran the 12 Days of Christmas Tourneys, one of the items to find was a +1/+1 small charm. Nobody found one in the tournament, don't know when I got this one.
Reactions: skiffcz
You must log in or register to reply here.
Share:
Facebook Twitter Reddit Pinterest Tumblr WhatsApp Email Share Link
Remove ads & support the site - Get PurePremium
Top Bottom