No, this isn't a murder confession; it's one of my lightly inebriated creative writing sessions. But it IS something I find interesting about my own (perverse) psyche. Bear with me.

So I bought my house nearly ten years ago, after being appalled by the real estate market in the NorthEast. It's a money pit & has water damage - my neighbor looked at buying it & was horrified at what he saw. My wife resents my purchase & misses few opportunities to remind me we could have done better.

The two "selling points" were that it's over 3.5 acres (1.416 hectares, I think?), and that it's a wooded lot bordering woodlands which are owned by a power company (meaning near certainty of no future construction). I waited over 10 years to buy, having been disgusted by the overpriced property of the 2000's. Here in NYC at the time, real estate sellers were 'crashing' funerals to try to list the properties! If I'd bought earlier, I'd be "underwater" as was the divorcee who lost the property I own to the bank.

All this is background to the point: I LOVE nature. It brings me closer to God. I find divine revelation in the smallest to largest facet of it.

Today I've spent perhaps almost an hour identifying a particular bird which is hanging out in a lilac 'tree' next to my house. Turns out he's an odd configuration of American Redstart, because he doesn't have a light colored underbelly and seems smaller than I expected him to be. 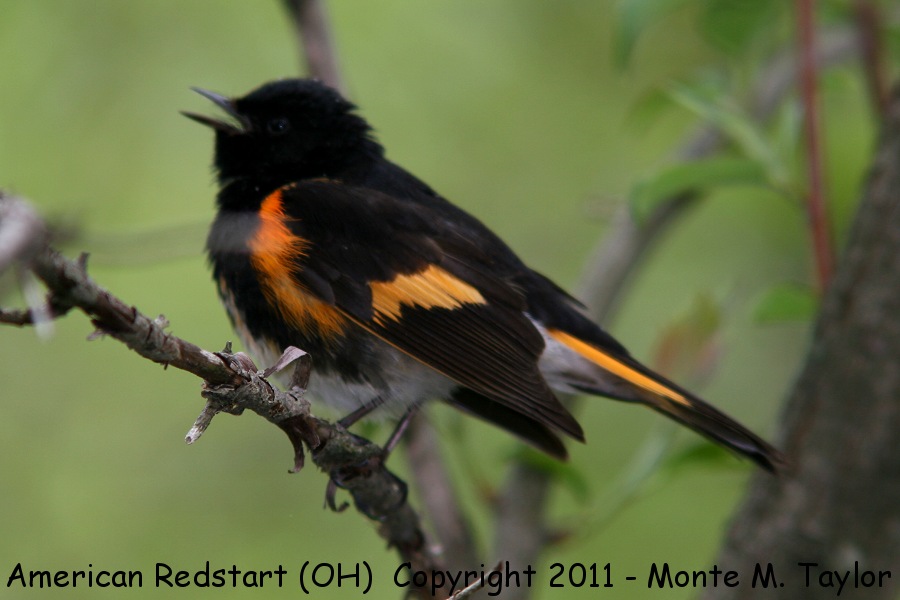 Now, lest I spoil the brutal, lowbrow KKKonservative image many of you have of me, bear in mind that I've effectively tortured animals... & potentially worse with humans. I have no compunctions about ending a person's existence, and less than I would one of the rats which are trying to undermine my house's foundation; perhaps less, given the rats are only responding to the food we've laid out for consumption. This certainly isn't in keeping with Christianity, or even with The Lord of The Rings:


Nevertheless, I find it very interesting that I'm not alone in being disgusted by humanity (or rather, the lack of humanity found in the modern era) while simultaneously being a nature enthusiast. My own father-in-law seemed to have the same tendencies, though he was always close-mouthed. It's almost as if there's a recognition that nature is behaving as God programmed it to, while humanity comes upon it's disgusting behavior with malice aforethought.


OK, now let's see who wants to denounce me as a monster, like the good old days.

Jeff Dahmer knitted booties and caps for preemies and he had a cat named mittens and he turned out all right.
N

after being butchered,cooked and served with a side of gravy and mashed potatoes.

I'll admit sometimes I find certain things less enjoyable than someone who doesn't have this, say, "utilitarian" mindset. Case in point is the 1993 American remake of a 1988 Dutch film, "The Vanishing", which my wife is idly watching upstairs. The early Dutch version is creepy, suspenseful, boring, & inconclusive, is vaguely based on a real incident, and is therefore applauded.

The American version is banal, plodding, and inferior in nearly all aspects. Additionally, (here's where my issues lie), Jeff Bridges plays a psychotic loser who taunts & mentally tortures Kiefer Sutherland about his having abducted Kiefer's girlfriend. In Europe, Kiefer wouldn't have had the easy opportunity to buy a gun, put bullets through Jeff's kneecaps, & start torturing him until Jeff begged for death.

The American movie wouldn't have had sufficient running time in my scenario & therefore would never have been made, which would have made the world a better place.

Let the Right One In is an infinitely better film than Let Me In.
The original German version of Funny Games is better than the US remake, despite the US version having two main stars I really like.

What can be llearned from this?

There are scarier things than Merv around. Duh.
Reactions: jmervyn
N

superdave said:
after being butchered,cooked and served with a side of gravy and mashed potatoes.
Click to expand...

See, with a kitten, you can just grill them quickly. With an older cat, you really have to braise it for several hours before it gets tender.
N

Don't get me wrong, I love cats. I just can't always finish a whole one.
Reactions: jmervyn

Noodle said:
Don't get me wrong, I love cats. I just can't always finish a whole one.
Click to expand...

I love kittens too, but they need lots of ketchup.

LozHinge the Unhinged said:
What can be llearned from this?

There are scarier things than Merv around. Duh.
Click to expand...

I'll have you know I'm very scary. You've said so yourself.